Creator
Robertson, Mel, Author
Media Type
Text
Item Type
Articles
Description
From the 1970s through the 1980s, Mel Robertson wrote many articles for the Burford Advance and Burford Times on the history of Burford Township. This clipping contains the article The First Frost. The article may not have been republished.

Burford area residents awoke on the morning of Wednesday, Sept. 22 to find "Jack Frost" had paid a visit. In the following special feature, Mel Robertson, The Times' historical correspondent, takes a look at "The First Frost" in years gone by.

BACK IN THE DAYS before electronic progress dulled the impact , of seasonal change, children who were left to their own imaginative resources regarded the year as a day. By this I mean we felt that New Year's Day marked the dawn of a new "day" that proceeded through "morning" episodes of St. Valentine's Day, St. Patrick's Day, Easter, April Fools Day, the 24th of May, Arbor Day and, finally, School Closing Day. July was like a long "Noon Hour" filled with all sorts of fun times - picnics, hikes to the creek, garden parties, and trips to Port Dover and Mohawk Park. In August, a feeling of "afternoon" began to set in with only Sunday School Picnics to brighten the hot dusty days. September was like the beginning of late afternoon with School Opening, School Fair, Burford Fair, Thanksgiving and Halloween. Then, the approach of night was indicated by "The First Frost", "The First Snowfall" and the approach of our greatest excitement - The Christmas Concert, Christmas shopping in Brantford, Santa Claus, Christmas Eve, Christmas Day and the end of our "year-day" on New Year's Eve.

Over the past 40 years I have written articles about most of the events described above, but I seem to have missed one that 1920s children anticipated every year. I refer to "The First Frost". This is an event that goes unnoticed in the 1990s, but it was an important event in earlier times.

Why, you may ask? Well, I think it was due to the fact that it marked a time when children put away all thoughts of summer and began to adjust their minds to the coming of winter. It was a time when they felt that their friend, Mother Nature, had tucked all her summer things into bed and their summer haunts of the woods and "the Crik" were "out of bounds" lest they waken their "friends of the summer".

"The First Frost" could never be predicted for any particular night, but most kids of earlier times were "weather-conscious" with-

out electronic aid. This was because, at the time, mechanical transportation was rare and kids had to make sure that a hike to the woods or "the Crik" would not be ruined by a storm. They had no radio or weather reports to guide them and the "Probs" in the Brantford "Expositor" were beyond their comprehension. Consequently, children placed considerable "weather knowledge" on such events as "The First Frost", "The First Snowfall" and "The First Crocus". These events had considerable influence on the daily life of 1920s children.

"The First Frost", like most of the important episodes of our year, had a number of fantasy figures attached to it. Chief of these was a mythical creature called "Jack Frost" who would sneak up outside our bedroom windows some night and paint them with unearthly figures. "Jack Frost" never became a visible creature for Disney and had not begun to create recognizable "play images" and children had to rely on their own imagination or that of their parents or "aunts".

Newspapers did not predict or describe his coming but children knew it was not far off when father, mother and grandpa began to get the parlour stove out of its summer hibernation in a clothes closet. Then lengths of stovepipe were laid out and, after much grunting and "pshawing", the parlour looked ready for cozy winter evenings when firelight shone through the coloured micah doors and mother read about the daily adventures of Uncle Wiggley.

Thus the coming of the "First Frost" was predicted and children would go out "last thing at night" to smell the air for signs of approaching frost. Some kids used to say that they could predict the arrival of frost by the prickly feeling they got in their nose on a cold night in the early fall. I used to think that I felt such a prediction but, looking back, I now suspect that the sensation was due to the nasty smell of the "soft coal" that was burned at the Post Office. In any case, we knew that the arrival of "The First Frost" was imminent when certain know-it-alls began to brag that they had seen the frost before anyone else.

Anticipation ruled our lives until one morning we awoke to find the inside and outside of our windows coated with the most fantastic figures and, since the frost was much like highly desirable ice cream, we ran to scrape it off the windows. This always created panic

among our grandparents who remembered the scarcity of window glass and they would yell, "Grief in the winter (a favourite expression), you will break the window and we will all freeze to death." This never happened as kids soon found that frost scraped off a window didn't taste anything like ice cream.

The day after "The First Frost" always inspired great boasting among kids on the way to school as everyone tried to claim that they were the first the see it, smell it or eat it.

Why was "The First Frost" so important to kids of the 1920s? I think it was due to the fact that children had become tired of the hot, dry, dusty and dirty days of late August and September and were eagerly awaiting some sign that a new season was about to start with different types of play and interest. Irish Cobbler potatoes that had been grown for the School Fair were examined, Burford Fair was anticipated, Halloween costumes were discussed and Fall Birthday parties were considered. At school, time was devoted to the intricate drawing of maple leaves, practices for the semi-military "drills" of the School Fairs, and side-long glances at the new girls and boys in your class.

A number of natural changes took place almost immediately: the little white cabbage butterflies that kids liked, but gardeners detested, disappeared; leaves that had begun to come down slowly and singly in September now started to fall with greater speed and abundance; and, depending on the severity of "The First Frost", nuts began to come down. Kids rushed to the horse chestnut trees in the village and contended with vigor for the nuts that had fallen. These were not edible but could be used in a number of games involving throwing and guessing. Girls often saved horse chestnuts because, with a lot of finger-rubbing, their beautiful brown colour would be enhanced.

Edible chestnuts were also in great demand to find where trees were located and if the nuts had come down. The chief source of local edible chestnuts was in the woods of Fred Day northwest of Burford. Fred, who was well known locally as a tenor horn player in the Burford Brass Band and Symphony orchestra, was always pleased to welcome kids to his woods. He would always greet us at his front porch and tell us where the best trees could be found. Then, after we had filled our bags, we would stop and give h*gj

"The First Frost" also ushered in a time when parents could get children to do work without ordering them to do it or by bribing them with pennies or cookies. I refer to the annual parental "scam" that was practised as soon as the leaves began to fall. Then, with sly smiles and flattery, parents would suggest that we rake up the leaves and make a leaf-house "as beautiful as the one you made last year". This flattered our egos and we would do the leaf-raking that our fathers or grandfathers did every year. We would enter this work with enthusiasm hoping that, after we had created a big pile, "Ted-Dog" or "Fido Bowerman" would not destroy our housebuilding efforts with an unsanitary three-leg performance.

And so "The First Frost" was the real end of summer and kids were given a peek into that part of their "day-year" that would lead us through gentle and mysterious steps "down the road to Christmas" - a path I have described in previous articles.

Before closing this article I would like to say that many of my articles about a 1920s childhood have been inspired by readers who have stopped me or phoned to ask if I could write something about some part of their childhood they liked to remember. This article is based on a suggestion from a local lady and I hope that it recalls some of her memories. Over the 40 years I have written articles of this nature I seem to have accumulated a considerable number of readers and I thank them for their contributions. None of these articles have intended to glorify "the good old days" but rather to note "the different old dirty good or bad. 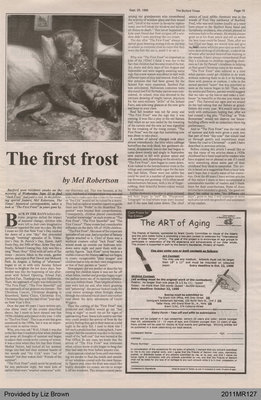