Creator
Robertson, Mel, Author
Media Type
Text
Item Type
Articles
Description
From the 1970s through the 1980s, Mel Robertson wrote many articles for the Burford Advance and Burford Times on the history of Burford Township. This clipping contains the article The Congregational Cemetery. It describes the history of the Congregational Cemetery in Burford, Ont. The article may not have been republished.

reports indicate that authorities are planning to under-e renovations to our Congregational Cemetery. With this in mind, it may be interesting to note the history of this cemetery.

The church itself was started in 1837 under the direction of the Rev. James Nail who had been sent from England by the Congregational Missionary Society. The building was constructed by Sam and Walter Gammage with plans that were also used for the present day Scotland United Church. Cost of construction was $3,000 and the building was opened to all Protestant denominations in 1839. The building was noted for its tall steeple which dominated the village skyline.

The Congregational Church flourished in Burford until Sunday, May 9, 1926 when the final service was held and the congregation, led by the Rev. G.F. Kelly, marched to the King Street United Church. The building was then torn down and, as a kid, I helped to pull the rope that brought down the steeple. When the Congregational Church amalgamated with the local United Church the communion table, communion service, pulpit furniture, church bell and other items were transferred to the United Church where they are preserved.

I do not know when the first burial took place in the cemetery but I do know that there are a number of unmarked graves there for when my grandfather, C.N. Woodin, was buried there in 1927 an old coffin was found when the grave was opened on what was thought to be a clear plot.

In the latter days of the 1800s a campaign was started by local land developers to have the cemetery closed and all coffins moved to a new cemetery outside the village. The reason for this was that the land developers felt that a cemetery in the middle of the village was preventing "business" from establishing itself here. The slogan of this group was "We don't need dead men, we need live men and men with money too". This campaign dragged along for some time in the local paper for the editor thought it was a good idea. However, it was found that opposition from people with graves there and the cost of removal was too great to do the job.

In the early days of this century, when Sunday was like a Scottish "Sabbath" when it was a sin for kids to whistle or people to look happy, the Congregational Cemetery was the centre of rather formal social activity with groups of people strolling among the stones, conversing and being as cheerful as the day allowed.

The Rev. George Kelly, who was the last Congregational minister, was very active in Burford. He was a fine athlete who played baseball with the Burford team and cricket in Brant-ford. He had a fine voice and was a soloist at many garden parties. In addition, he played the cornet in Bur-ford's symphony orchestra and was the villain in many plays that the local Dramatic Society presented in the Barnea Hall. He also taught "tonic-

After leaving Burford George Kelly became a dominant figure in Toronto Cricket circles where he played for many years. In addition, he knew a number of missionaries from Africa and when they visited him he would always bring them to the Public School to tell of the countiy where they worked. I remember one of these missionaries who always told the same joke. His name was Storey and he used to say, "We added another Storey to the house but had less room." Since we kids were not accustomed to stand-up humour we had to have our mothers explain it.

My only comment regarding the coming renovation is that I hope the big tree will be retained as it has been the heart of the cemetery for many years. My other observation is that many of the old pillar-like stones have very heavy stone urns or vases

on top. These should be anchored firmly for if one fell off on anyone it would kill or seriously injure them. (Vandals beware. You could get more than you could imagine.)

The Congregational Cemetery contains the graves of a number of prominent people including Robert Whale, the Canadian artiest who, before he moved to Brantford, had his studio in the house south of the cemetery. In recent years some people have said that this house was the church which had been moved there. This is incorrect for, as a kid, I stood among the ruins of the church as it was being torn down and this house existed long before the destruction of the church.

The Congregational Church was also noted for its "Afternoon of Christmas Eve" parties in which children of all denominations in Burford were given candy, nuts and fruit as well as little "Moral story" books. 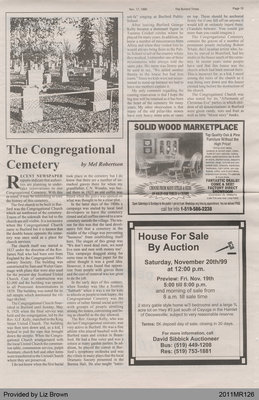