Creator
Robertson, Mel, Author
Media Type
Text
Item Type
Articles
Description
From the 1970s through the 1980s, Mel Robertson wrote many articles for the Burford Advance and Burford Times on the history of Burford Township. This clipping contains the article The Days of Knights. It describes "medieval games" in Burford in the 1920s. The article may not have been republished.

The Days of Knights

IN A SUMMER ISSUE of "The Times", I was interested to note that Burford Public School students had enjoyed a "Mediaeval Day" in which they played at being knights and ladies. I was rather surprised to read this as I was under the impression that, in this age of computers, Nintendo, Game Boy and the Internet, such activity would not be considered "cool". However, it recalled a day in the 1920s when three or four little Burford boys tried to do the same thing.

Our reasons were two. First was the practice of Burford Public School teachers to spend the first half-hour after lunch reading to us. These were usually animal stories but now and then we heard stories about Robin Hood in which the knights were bad guys, and King Arthur in which the knights were good guys. Our second reason was that in the 192()s Burford had no organized summer activities for children and, when school got out in June, kids had to organize their own play time using their imagination from books we had read or stories we had been told.

One particular summer morning the little boys were sitting in coaster wagons near the corner of King and Maple. We were trying to think of some ways to spend the day. Suddenly someone said, "Let's pretend we are knights." This was agreed upon and soon we were trying to sort out the things we would need.

The list was long and complicated for we knew that knights required a castle, suits of armour, dragons, "fair ladies", swords and "steeds" (not horses). We began with the construction of a castle. This was a simple task, for in those days merchants received most of their goods in big cardboard boxes. Lots of these were available and in no time we had built a castle of sorts on a lawn that used to exist behind the former Township office.

Then we turned our minds to getting armour. This was difficult for the use of armour was not the general practice in Burford. However, we found that in those days stores received their stocks of chewing tobacco in tin boxes with a wooden base. These were about a foot square and, when the wooden part was knocked out and one tin side turned up, we had a shining helmet which, even though it stank of chewing tobacco, served the purpose.

As we sat there wondering what to do next, Fido Bowerman, the Royal Bank Scotch collie who took part in all our games, came up wagging his tail and offering a paw for a "shake". He sat down and contemplated our castle. Then he got up and circled the "noble edifice". After a couple of circles he apparently decided that every castle needed a moat so he lifted his leg at the front gate and provided the necessity. This caused great consternation for the "fair ladies" (our sisters) who afar began to laugh at us and we realized that the "age of knighthood" had ended.

So, we threw off our stinking tin helmets, grabbed our bathing suits and headed for the creek hoping that its crystal waters would wash away the smell of chewing tobacco from our hair before our parents asked us how it got there...

Another strange news item about the days of knights came to my attention this summer in a July issue of the Globe & Mail. It came from their Jerusalem correspondent and told about the arrival of about 2,000 American, English and German Protestants who had walked from Cologne, Germany via the old crusader trail to Jerusalem. They arrived in Jerusalem on July 15 which was the 900th anniversary of the day the Crusaders, led by knights, captured the city and massacred every person who was not a Christian. This included 5,000 Jews who were burned in a synagogue, 9,000 Moslems killed in a mosque and anyone else who was thought to be an "infidel". The purpose of this 1999 pilgrimage was to apologize to Jerusalem for the slaughter made by the Crusaders by handing out pamphlets and plaques expressing their sorrow. These "apologizers" received a very cool welcome in Jerusalem as both Jews and Moslems felt that this was an unwanted attempt to promote Christianity and an unnecessary revival of old animosity. It is interesting to note that none of the leaders of Christian faiths endorsed this silly expedition.

Knights have played a big part in the folklore of many European countries. All have been mighty warriors who never needed to wash their faces, clean their teeth or change their underwear. Their only work seemed to be prancing around the country killing anyone they did not think was a Christian, saving "fair ladies" from bad guys or "endangered species" of dragons, and going on pilgrimages and bragging about their exploits while consuming gut-rattling meals prepared by unpaid slaves. When they became bored with this sort of life they "dallied" with "fair maids" in "leafy bowers". All of their daily and nightly needs were handled by slaves.

They apparently wore "shining armour" most of the time that had to be kept shining by the labour of more slaves. When they set out to make the world a better place they had to be hoisted onto their steed with a sort of crane due to the weight of the armour and on the steed they had on a sponge in case they were "taken short" and had no one to help them off the horse. They also tenderized their steaks by putting them under their saddle. (Were these called "steaks a la merde" due to their proximity to the useful sponge?)

All of this made great romantic literature but one thing puzzles me. Did the knights take off their "shining armour" when they "dallied" with "fair ladies" or did the "damsels" put up with all the clatter involved?

England's legendary "knight" was either St. George or King Arthur. St. George may be an imaginary figure but King Arthur is now thought to have been an early British king who fought against the Romans or other invaders. Many stories exist about him and these were collected into a long poem by Lord Tennyson. He named this "The Idyls of the King" and presented it to Queen Victoria after the death of her husband, Prince Albert. The poem opens with the words "These to his memory for he held them dear" and goes through the stories of King Arthur's knights to his betrayal by his queen Guenivere to his death after a battle with his nephew Mordred. He is supposed to be buried at Avalon of Glastonbury in England where he is sleeping until his country needs him.

Some credence was given to Arthur as a real person when a very large stone coffin was found near Glastonbury. This exists in a cloister at Glastonbury and I saw it one misty afternoon in March 1955. While we were examining it, Shirley always said that she saw the misty figure of a monk go by. I did not see him but since Glastonbury has its Holy Thorn Tree, Holy Well and its mound called the Tor it may be possible to imagine many unexplainable things.

I have never read all of "The Idyls of the King" but part of it was thrust upon me at McMaster in 193 8. While it had not been part of our English A class, one day Dr. Mclay, our professor, asked us to memorize "Arthur's Farewell", a speech which the dying king begins by saying "The old order changeth yielding place to new". Having to memorize it so late.

but when the Second World War started in 1939 it was obvious that Dr. Mclay could see that a great change was about to take place and that we should be ready for it. When the war began many of the class went to it and some did not return.

The "fair ladies" of the days of "knighthood" lived quite useless lives. Everything was done for them by unpaid slaves but they didn't get the romantic attention knights got because they didn't kill dragons or "infidels". They just sat around knitting and "swooning" (fainting) or "dallying" in accordance with what they thought was romantic. If they became legally pregnant it was said to be due to some sort of celestial interference, or if they dared to "dally" with a knight who was not their husband they were seized by indignant clergymen and rushed off to a nunnery like Queen Guenivere after she "had it on" with Sir Lancelot. This was the way "ladies" were treated during the "days of knighthood". Women who were not considered to be "ladies" had it even worse. Indeed the "days of knighthood" were not times to be so admired and eulogized by Victorians.

Strange to say it would appear that the age of knighthood is still admired by people with more dollars then sense (cents), for not long ago it was possible to buy a full suit of metal "shining armour" at a well-known emporium near St. Thomas. I was astonished to note that it was made in Canada and cost $ 1,100.1 do not know, however, if this price included the necessary sponge. I couldn't imagine anyone wanting to have such a gigantic piece of crap hanging around their house unless they had servants or a browbeaten wife to apply the necessary polish to keep it "shining". However, as the saying goes, "everyone to his or her own taste".

In writing this article I am aware that a number of excellent service clubs and fraternities call their members "Knights". I have great admiration for these organizations and nothing in this article is intended to disparage them in any way. Their many good deeds speak for themselves.

Do I have any more to say about medieval "knights" in this article? Just one thing - I thoroughly approve of our dear Old Fido Bowerman's assessment of our early desire to become knights. 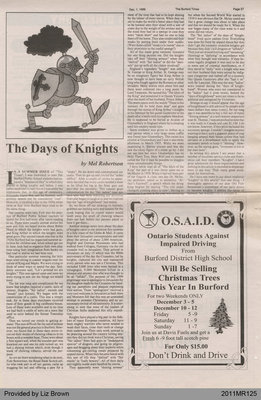