Creator
Robertson, Mel, Author
Media Type
Text
Item Type
Articles
Description
From the 1970s through the 1980s, Mel Robertson wrote many articles for the Burford Advance and Burford Times on the history of Burford Township. This clipping contains the article Nuts to You. It describes Christmas celebrations in Burford in 1920s. The article may not have been republished.

Anyone entering Knechtel's in these pre-Christmas days will note by the main door a mouthwatering and eye-pleasing collec-ficTn of Christmas goodies. There, in colourful and interesting packages, may be found all sorts of candy, tangerines, figs, mints, salted nuts of all types and a pleasing variety of Christmas plants. In addition, there are big baskets of walnuts, almonds, Brazil nuts, filberts as well as collections of mixed nuts.

These large baskets of unshelled nuts remind me of a time when I was a kid in the 1920s. Then we knew the first intimation of the approaching Yuletide was when, in the first week of December, local merchants brought out stocks of toys that had not been displayed during they year and big rectangular boxes of walnuts and almonds. Seeing these big boxes struck kids like "a ton of bricks" (as the saying was), for during the rest of the year only peanuts in their shelled or salted form were available. These came in big tin pails and, for a few cents, a kid could have the merchant dig out a handful for them. This was a great treat unless the merchant had just filled a coal-oil can for another customer.

Another harbinger of Christmas in the 1920s was the appearance of navel oranges on store counters. Children welcomed the arrival of navel oranges because they did not have seeds and were sweeter than the seeded oranges. However, for some reason we kids thought mat the word "navel" had something to do with ships untilsome know-it-all told us that these oranges got the word "navel" because the spot on the end looked like your "belly button", or navel. This caused much giggling and whispering. The cost of navel oranges was beyond the pocketbook of 1920s' kids, but we knew that on Christmas morning when we crawled to the foot of the bed to examine our stocking the unforgettable sound of rustling involved not only walnuts and hazel nuts but also a big navel orange.

of a gastronomic future, even though trying to eat a Christmas breakfast of walnuts and navel oranges was out of the question and not to be considered a way to start any day.

The Burford area has had many types of nut trees but only two recall anything to my mind - a butternut tree and a beech nut tree. The butternut tree stood at a place on Whiteman's Creek just above the spot that contained the ruins of an old mill dam. I remember clearly the summer day when we found it. On that day my Aunt Lizzie had collected a number of children for one of her afternoon hikes to the creek. These were interesting hikes for children as we played walking games as we went along and there would be stories and a lunch by the creek.

We set off from an area that i s now the north end of William street and proceeded northwest toward the creek. There we came upon a fence and, when we squeezed through, we came upon a little spot that contained a butternut tree and a small sandy beach. We spent such a happy time there that whenever Aunt Lizzie or Auntie Ruth asked us where we would like to go we would say, "Let's go to the butternut tree". I never knew if this tree grew to any size or what became of it. All I do remember is that it remains in my mind as a remembrance of kindness shown to a number of Burford children by their hard working and loving "aunts".

The beech tree is remembered in a different way. It stood on a place along the creek that we called "our island" and was one of a considerable number of beech trees that grew there. It is not remembered for the nuts it produced but rather for the fact that the smooth bark of its trunk was an ideal place for boys to carve their initials. Since the "island" was a place where 10 year-old boys could go without parental supervision, everyone with a jack knife set to work. Signs of adolescence began to appear for we noted that some "precocious" boys carved not only their own initials but also those of some little girl they liked. They did this hoping that the girl in question would notice her initials and wonder who was their secret admirer. Over the years this tree became heavy with carved initials and I often wondered if it would sur-

vive this assault. However, I visited the tree several years ago and found that it was in better condition than most of the carvers.

The word "nut" and "nuts" have a variety of meanings that have nothing to do with nut trees or their produce. For example, the word "nut" in England refers to one's head and for someone to say to someone "get that through your nut" is a sarcastic way of telling a person to understand something. Similarly, to say that someone is "off his nut" doesn't mean that you doubt his mental capacity but rather that he has done something out-of-the-ordi-nary.

The expression "Aw, nuts", if said during an argument, means the person is tired of what the other person is saying. Similarly, the expression "nuts to you" is a "put down" to someone who bores you. On the other side of the coin, to say that you are "nuts" about someone means that you are fond of them. Also of a complimentary tone, to say that someone knows everything from "soup to nuts", or has done everything from "soup to nuts", means that they have done a good job.

During the Second World War an American general received great praise when he replied with the word "nuts" when asked to surrender.

The world of entertainment even included several famous "nuts" pictures and expressions. These included a cartoon character "Boob McNut" who demonstrated his reasoning capacity by wearing a tin can as a hat, and a radio comedian who identified himself by saying "I'm from Missouri where the nuts come from".

Food even contains the slang reference to nuts by the expression that someone is "nutty as a fruitcake", which once again means that you don't agree with them.

Finally, I can't ignore that the word is used to describe parts of the male anatomy which,

if I discussed them, would mean I was "off my nut".

It is difficult to understand why nuts and nut-bearing trees have accumulated such a vocabulary of ridicule. Most of the nut trees in this area are stately, dignified things which, if they were human, would be called "pillars of the community" or people wouldn't say a four letter word "if their mouths were full of it". Wood from nut trees has been prized for centuries in the manufacture of fine furniture, as anyone who watches the "Travelling Antiques" TV show will know. Going even further, the oak which bears nuts as acorns has been the symbol of British bravery for unnumbered years. Songs such as "Heart of Oak" and stories of British navel successes fill historical literature and, before Pokemon took over juvenile intelligence, many children cherished the possession of certain nuts and would fight viciously with other kids to get them. Even coconuts were held in esteem, even though you needed a hammer to get at their contents.

Another thing that is difficult to understand is why nuts of various kinds have become Christmas symbols. There is no reference to nuts in the Christian Christmas story or in the pagan symbolism that has grown up around Yuletide season. Indeed, in European mythology surrounding Saint Nicholas it was not nuts that he threw down chimneys for Yuletide stockings but gold coins, and the traditional Dec. 6 visit from Saint Nick and his attendant "Black Peter" (a mythological name I did not create) did not include nuts for good children and hickory switches for those who had been bad. Possibly the use of nuts as "stocking stuffers" may go back to pioneer days when candy other than maple sugar and homemade fudge was rare and nuts were added to make a worthwhile treat.

Since I lack the knowledge to decipher the pros and cons of Christmas nuts, the only advice I can give is that the next time you see the fine display of Christmas nuts in Knechtel's you think of them not as symbols of silly ridicule but rather as a part of the spirit of kindness that should prevail at this time of the year. 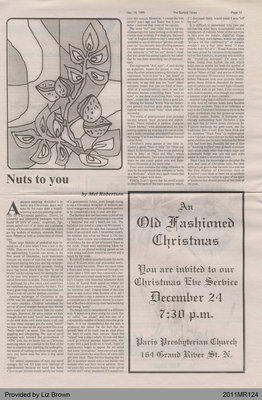