Creator
Robertson, Mel, Author
Media Type
Text
Item Type
Articles
Description
From the 1970s through the 1980s, Mel Robertson wrote many articles for the Burford Advance and Burford Times on the history of Burford Township. This clipping contains the article Snowballs. The article may not have been republished.

AS I LOOK OUT on this February day I notice a lot of snow but an almost complete absence of children playing in it, or with it. This is not unusual (nor is it a criticism), for children have always been able to make the best use of things and stuff that was available. Today, electronic progress, including computers, Nintendo, GameBoy and Poceman, has made it more interesting for kids to stay in during the winter. Rec rooms, indoor rinks and other sheltered facilities have made it unnecessary for children to face winter's blasts. Going to school is handled by busses and in schools there are gyms, cafeterias, libraries and other activity centres. Children are never told to "Get out from under my feet. Go outside and play." Indeed, if any parent dared to give such orders they would in all likelihood face severe criticism and even litigation. This is just the way life has progressed. I don't criticize such progress but I am glad that I won't be around when Microsoft introduces a device which will control most of an individual's activities including shopping, housekeeping, marital indulgence, child-raising and basic physical eliminations. Then "uniformity" will be the accepted mode of life and "common sense" will be passe.

Having said all that, I will now refer to the times when, for the lack of facilities and resources, children

were left on their own to organize their own play-time. This is not a criticism of parents of the time for there were few labour-saving devices in the home and parents had to work very hard in winter to "keep things going". Most children accepted this fact and created their own amusements.

At Burford Public School snowball belligerence was strictly controlled. It was a "strapping" offense to throw snowballs in the front playground as there were so many big windows that could be broken. However, in the "back-field" teachers would organize snowball battles. Two sides would be chosen and two forts would be built. Then one side would be chosen as the attackers and a battle would take place with one of the forts being demolished in a charge that included volleys of snowballs and much "rasselling" in the snow. Then the defeated side would charge the other fort and repeat the fight.

Girls never took part in these snow-battles as it was considered to be "unladylike" for them to do so. However,

there was a rather silly "romantic" use of snowballs at the time for, if a boy "took a fancy" to a girl, he might toss a soft snowball at the back of her "Red River coat". This was considered to be a sign of romantic interest and there was much giggling when it took place.

One incident of the belligerent use of snowballs against girls came to my attention several years ago when my grandmother Woodin explained to me why a certain dignified member of the community had the almost-forgotten nickname of "Snowball". This man is no longer here and I will not reveal his name but he used to live in the first house south of the Burford United Church on the east side of Alexander Street. This man, as a boy, apparently took great delight in "snowballing" girls. Finally, one day several girls, including my grandmother, decided they had had enough so they tackled the boy, threw him into a snow bank and administered the greatest snowball insult of the time - they washed his face with snow. This stopped his snowballing of girls but he kept the name of "Snowball". This came up during a discussion of local history some time ago, and when this man's name was mentioned someone said, "Oh, you mean old "Snowball"." Even though this man became a respected member of the community (and sold tombstones) he never "outlived" the nickname.

Another belligerent use of snowballs was employed by boys in earlier times to "get back at" some adult who they felt had thwarted or misused them. It was an act that would not be acceptable today but we must remember that at one time many adults did not hesitate to strike boys who were not their own for some real or imagined misdeed. For example, I can recall the severe beatings a friend was given by a man on Maple Ave. South when he chased a ball onto the man's lawn and the beatings and duckings many kids got from a certain farm employee when they happened to trespass on his part of the creek. Such things are certainly forbidden and condemned today but in earlier times if a kid complained he would get little sympathy from most parents.

That was the way things were and kids learned a few ways of "getting back at" tormenters. In winter a group of boys would gather in an evening near the house of the person they wanted to "get back at". A large pile of snowballs would be made. Then one boy would go up on the porch and pull the light switch which was usually on the porch. This would extinguish all the house lights. When the man came out to turn on the lights he would be greeted with a volley of snowballs, some of which would be hard-packed.

I don't know if this sort of "wild frontier justice" accomplished anything or if it changed the attitude of men who felt that "one alongside the ear" to any kid who "talked back" to them was their right. I do recall the social attitude that prevailed when I was a kid in which parents greeted with approval the words of a new

principal at Burford Public School who declared that he intended to strap every student, including girls, before Christmas. This was the way it was -a good illustration that "the good old days" were in many respects "the bad old days".

A less violent use of snow balls in earlier times was the creation of large snow balls for no particular reason. I recall one day at BPS when the snow was very "packy" and every boy joined in an effort to roll all the snow in the north playground into a large ball. A ball of Babylonic proportions was created using all the snow available. When we stopped to admire our work some kid jumped on the monster ball and dared anyone to knock him off. This resulted in a free-for-all in which we all returned to class with wet mitts, wet clothes and wet boots with nothing to show for our efforts.

The building of snow-houses was another annual winter event. This activity was inspired by two things. One was the popularity of such books as "Bobby Blake in the Frozen North" and "Connie Morgan in Alaska". Each of these books extolled the igloo or snow-house and we tried to emulate our book heroes.

The other factor was that snow-house building, like leaf-house building, was part of the annual "scam" parents worked on kids every year in order to get leaf-raking and snow-shoveling done. In earlier times when there were no electric clothes driers women had to hang out washing on clothes lines and a snow-filled backyard was not conducive to this task. Therefore mothers or hired girls would say to bored kids, "Why don't you build a snow-house?" Then kids would shovel all the backyard snow into a pile and the work of hanging out clothes would be facilitated.

Snow-houses were not good play places for sitting on a snow-house floor would quickly produce a wet seat. However, we imagined that they were the winter dwellings of our story-book heroes and we made the best of it. We thought, of course, that they were the year-round dwellings of Arctic people but I found after living three years in the sub-Arctic that snow-houses, like the bark-house Governor Simcoe lived in during his one-night stay in 1793 west of Bur-ford, were merely quickly built overnight shelters. However, I do recall the morning of Burford's total solar eclipse when I sat with other kids in a snow-house behind the present County office trying to write down what we had seen as the shadow crossed the fields north of Burford Public School.

Many snows have come and gone since those days and we are now into an age of many changes, one of which is the recent advertisement of a plastic "snowball maker" which will produce beautiful symmetrical snowballs that will "explode on contact". Next, of course, will be a device to fire these perfect snowballs and so the art of snowballing will have advanced into a state completely unknown to the wet-arsed kids of the 1920s. 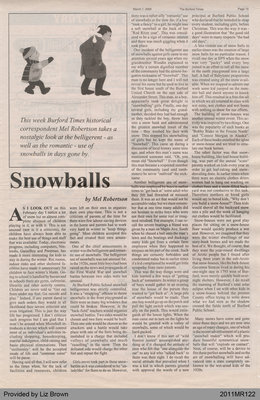