Creator
Robertson, Mel, Author
Media Type
Text
Item Type
Articles
Description
From the 1970s through the 1980s, Mel Robertson wrote many articles for the Burford Advance and Burford Times on the history of Burford Township. This clipping contains the article Knives - The Cutting Edge. The article may not have been republished.

FOR UNCOUNTED centuries knives in many forms, shapes and sizes have performed a multitude of tasks. As to names, they have been called daggers, stilettos, dirks, Bowie Knives, Jack Knives, machetes, bolos, Toad Stabbers, bayonets, etc., etc., etc. As to tasks, they have been employed in battles, murders, home-cooking, shoe-making, clothing production, agriculture, cattle raising, transportation and, in the Middle Ages, to do dirty tricks on little boys to produce the countertenors so important to cathedral choirs.

A history of knives would require a great deal of research and time. However, I intend to confine this article to a few types of knife rarely mentioned in " song and story".

Possibly the best place to start this discussion of seldom-mentioned knives would be the time when little boys received their first "Jack" knife. Why the word "jack" was used to describe these knives I cannot say but note that the word "jack" is used to describe many articles and many activities. To begin it is the word used to refer to the name "John". Then we get hundreds of uses of the word. To name a few we have "Jack Tar" - a sailor, "Steeple Jack" - a high steel worker," Jack Ketch" - the ancient hangman, "Jack Frost" - the winter weather man, "Jack Ass" - a fool, "Jack and Jill" - a nursery rhyme, " Jack-o-Lantern" - a Halloween item, "Cheap Jack" - a careful businessman, "Laughing Jack Ass" - a bird, "Jack Lights" - a forbidden hunting aid, "Jack-of-all-trades" - a well-qualfied workman, Lifting Jacks, Bowling Jacks, etc., etc., etc. The first jack knife that most six year-old boys received in the 1920s was a one-bladed thing with a tin cover on which was pressed a patriotic slogan and the picture of a World War British general. This was unusual as the knives were made in Germany. The blade couldn't cut butter but it was something that little boys could brag about as the first step in "growing up". I had one of these silly jack knives but can't recall using it for anything.

The next step in "jack knife progression" came at age nine when a boy received a two-bladed knife that could be used to whittle wood or in a game called " Tic-Tac-Toe" in which the half-opened knife was flicked off the end of a finger to do something I can't recall. There was little "Wild West" bragging in these knives but they led to the receipt of a bigger knife with two real steel blades and an awl-like attachment. These were called "Toad Stabbers". Why this name was given I cannot say for 1 cannot imagine any boy wanting to stab a friendly little toad. However, the "Toad Stabber" vaulted little boys into what they thought was "a man's world". They increased bragging rights immensely, particularly if they had a ring to which a chain could be attached. Then the "Toad Stabber" could be produced from the pocket with the same flourish men used when they drew their pocket watch from their vest.

The "Toad Stabber" was not the end of "jack knife progression" for, at about the age of 13, a 1920s boy would get the ultimate "Jack Knife" - the "Boy Scout Knife". This knife was a traveling workshop for it contained many useful devices such as a screwdriver, an awl, two big blades, a bottle opener and a corkscrew - all things that a budding Boy Scout would need. Boy Scout knives are still available but I note that the modem types do not include a corkscrew. This is a sensible omission as it is doubtful if Boy Scouts would need to draw a cork from a bottle of champagne or of Karlstader Saumagen. However, the "Boy Scout Knife" was not the end of "jack knife progression"" for it is now possible to buy a multi-use " Swiss Army Knife" which presumably can allow a Swiss soldier to do anything but climb the Matterhorn.

Pocket knives are not a thing of the past for they fulfill many useful tasks. Many men (including me) carry pocket knives which perform many useful daily tasks and it is interesting to note that our local Home Hardware store has an excellent display of many types of pocket knives. The only modern difference is that jack knives no longer play a bragging role in the lives of 12 year-old boys for they have been supplanted by the ability of kids to operate computers and the skill they have acquired in "hacking" or destroying major computer programs.

All of the knives I have mentioned above were considered to be "men's knives" but there was one group of little knives that were exclusively "ladies' knives". I refer to the little knives women of earlier times carried in their purses and, since I come from a family with a "squirrel-like" propensity to collect things, I have a couple. One of these is a little thing with a "Mother-of-Pearl" case. It has one blade of " coin silver". The other has a pseudo-silver case and contains a "coin silver" blade plus a little pick. Blades of these knives will not "take an edge" and their use was for opening letters. The little pick was intended to be used to clean the fingernails or pick the teeth. Other "lady's knives" I have seen "sported" a little spoon-like thing that I understand was used (heaven forbid) to clean one's ears. These dainty knives could not be used to repel boarders but were thought to be a proper adjunct to "fashion" nfthedqy. They could almost be classified with the fashionable trend of the ultrachic to display their belly buttons.

Another small knife that was "a cut above" the "lady's knife" was the "Pen Knife", a sturdy, sharp little knife with an ancient history. It was the knife used to create pens before pen nibs had been invented. Then the quills of chickens, geese or ducks were cut at an angle to produce a point that could be used for writing. Little sharp knives were used for this task and, since blade sharpness was of the utmost importance in creating a pen nib, or renewing it, a very sharp blade was required. Knives of this type had various uses about the house and may still be found in many homes. They had no particular features or beauty but women of earlier times found that it was easier to cut thread with a pen knife than with your teeth.

The most important domestic knife in earlier times was the carving knife. This was usually part of a carving set that included a large fork, a long sharpener and sometimes apair of "game scissors" to dismember fowl. The carving knife, which played a very important part in social life of earlier times, was always of the best Sheffield or Solingen steel. Handles of such knives were always of fancy horn which, in the case of German sets, always had birds or animals engraved on them. At a large supper party all the dinner dishes were piled in front of "the man of the house". In front of them would be the carving knife and fork resting on cut-glass holders that looked like dumbbells. The roast or bird would then be placed on the table and "the man of the house" would rise and take up the carving knife. He would give the knife a couple of ceremonial passes at the sharpener and would proceed to carve the meat, sending each plate to the "woman of the house" at the other end of table where vegetables would be added.

There was considerable skill required in the carving of meat "at table" and some families taught their sons how to do it before they gave them the facts of life. One of the social skills was for the carver of a fowl to ask lady guests if they preferred white or dark meat. Another was to see that any little boys present got "drum sticks" and any little girls got "wings" (talk about gender discrimination). The greatest skill was for the carver to see that everyone got a good helping of meat so that he would not be left with a few bones or gristle. Most meat carving in earlier times was considered to be " a man's job" but some women were very adept at it even though their carving skills were not demonstrated at supper parties.

Indeed in the days before there was much talk about fern-lib it was smart for women to say "Mrs... can carve meat better than her husband". This was considered to be a great compliment. My parents tried to teach me how to carve meat at an early age but the only time I ever put this training to the test was in the years when, with other men, I carved turkeys for the Holy Trinity Turkey Supper.

Today we read many reports of stabbings. This is regrettable but it is interesting to recall that, despite all the jack knives that kids had in the earlier days, I don't recall any incident when a kid threatened another kid with his "Toad Stabber". My only recollection is the fact that, at BDHS in the 1930s, we had to memorize MacBeth's speech which he gave just before he killed the King of Scotland. It starts with the words," Is this a dagger that I see before me" and we were required to scour our attics for old knives to use in the play when it was on at an evening concert.

An out-of-school recollection is when I was singing "music-hall" songs in troop shows I ran into one ditty in which a girl was prepared to do "anything" to get a knife that would take stones. I don't know what sort of knife this was but it must have been very special to have its price include "everything".

This article is not intended in any way to condone the lethal use of knives. My only intention is to show how various "jack knives" played an non-lethal part in the " social progress" of little boys hi the 1920s and how some special knives aided dreams of "social recognition" in the minds of some men and women of those times. However, there is one final anecdote that may show an interesting contrast between social attitudes in former days with those prevailing now.

There was a well known local man who was known all his life by the name of " cut-pote". This was due to the fact that, as a kid, he was a spoiled brat, who, when he failed to "get his own way", would pull out his ten-cent tin knife and declare that he was going to "cut my pote (throat)". Today such a threat would lead to medical treatment by a "head shrinker" but, since such specialists were not available in earlier days, his parents "laughed him out of if and, while he stopped making these threats, he retained the nickname.

Such treatment would be frowned upon today but it is indicative of what people had to do when present-day facilities were not available. The kid grew up to be a highly respected Burford citizen whose name and nickname will be remembered by some of my older readers who suggested that I include the anecdote in this article. 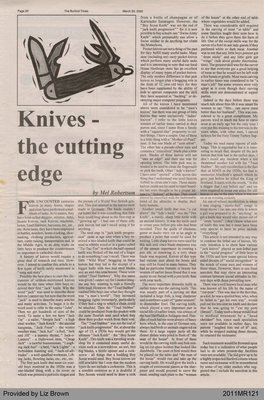