Creator
Robertson, Mel, Author
Media Type
Text
Item Type
Articles
Description
From the 1970s through the 1980s, Mel Robertson wrote many articles for the Burford Advance and Burford Times on the history of Burford Township. This clipping contains the article Our Ancient "Trail" - No. 53 Highway. It describes the history of Highway 53. The article may not have been republished.

RECENT NEWS coverage of the "Trans-Canada Trail Relay 2000" bring to mind he fact that Burford's King Street (Hwy. #53) is one of Canada's oldest "trails". I realize that I have mentioned this previously in my writings about local history but it may be appropriate to repeat the information. It is not known when this road became a well traveled "trail" but it would have been after the time that the Burford Plain was a large, shallow

inland sea - a prehistoric feature that existed for centuries and produced some of the unusual rock formations that now grace the front lawns of many homes. When this sea drained through what geologists say was the "sluice", now called Whiteman's Creek, it left a large fertile area that became inhabited by large herds of deer. This became a famous "happy hunting grounds" for many aboriginal tribes and, while there is little evidence of permanent habitation,

historians state that many of the stone artifacts that have been discovered date back as early as the 9th century. They conclude that the aboriginal path that is now Hwy. #53 became the " Old Indian Trail"," The Old Detroit Road" or several other names.

The " Trail" seems to have followed the route of the present highway, starting at the head of Lake Ontario and passing through southern Ontario to the present site of Detroit. In the Burford area, it was joined by another major "trail" that extended southwest from the area of "the Old Red Mill" on the Sixth Concession (northeast of Burford) to what is now the corner of Ring Street and Maple Ave. North. This "trail", which cannot be located on the ground, shows up very clearly in aerial photos. Historians conclude that this trail served the prehistoric inhabitants of the village sites that existed along the high ground north of the Crombie property as well as people who had traveled by canoe up Whiteman's Creek and who wished to continue their journeying along the major "trail". Archeolo-gists consider that the main "trail" was used in prehistoric times by the aboriginal people known as the "Neutrals", who used it to carry tobacco and other things they had grown or manufactured for sale or barter with aboriginal tribes in what is now the United States.

In 1701, our "trail" took on a new role when the French established a fort at Detroit. Then a monthly mail service was established between Montreal and Detroit withcoune^i traveling by water during the summer and by the "trail" during the winter. The service consisted of one courier accompanied by two Indian guides. When the British won the war against the French in Canada they continued the monthly mail service. This was a routine trip until February 1793, when Governor Simcoe, on his historic trip to Detroit, met the courier Mr. Clark and his escort of a Wyan-dotte and a Chippewa Indian west of the village. The two parties met again near Burford on Simcoe' s return from Detroit. In 1794, Simcoe sent a party of surveyors, under John Stegman and Augustus Jones, to lay out what is now the sixth and seventh concessions, and, by 1806, the "Old Indian Trail" had become the "leading road" in Upper Canada. The road was a corduroy road made of one foot diameter trees with gravel between each tree and a 16-foot width. This provided a solid but bone-shaking surface.

During the War of 1812-14, the road rattled to the sound of both Canadian and American military traffic.

After the war, stage coach travel became in use in 1827. However, the corduroy surface of the road made travel so rough that often passengers got out and walked beside the coach. Finally, in 1842, the width of the road was increased to 32 feet and the surface was planked. This was a great improvement but coaches made so much noise on the road that the 4:00 a.m. arrival in Burford was hailed long before the coach came to the local hotel. Speed along the planks

was about nine miles an hour and service was daily in summer and triweekly in winter. Planked roads were bad for horses as they ruined a horse's legs in about two years. Eventually, commercial traffic became too heavy for the planked road and gravel was substituted - thus creating the name of " The Burford Stone Road".

The road was not always government owned for, in 1860, R.C. Muir purchased it from the government and established tollgates. This lasted until 1875 when the Township took over and restored the surface.

Our" Trail" was a gravel road until the early 1930s when the north side of the road, from Brantford to what is now the corner of Hwys. #53 and 24, was paved. This created problems for, although the paved side of the road was reserved for westbound traffic, many smart-ass eastbound drivers would force westbound drivers into the ditch. One Burford businessman who operated a local grain elevator was famous for this illegal practice.

Until the 1930s, Hwy. #53's surface was higher than the local sidewalks and Burford had no concrete curbs. However, major highway construction took place in Burford when the road surface was lowered to its present height and concrete curbs were installed. Then a "tarvia" surface was laid down and a "Keep to the Right" metal sign was installed in the middle of the King St. - Maple Ave. intersection. When this highway improvement was taking place, Considerable secnon^o^TE^ancienrpfimK*"

road were dug up in the area in front of Blessed Sacrament Church. Since then, many improvements have been made in this ancient road and now it is one of the most heavily traveled roads of this type in Ontario.

Some changes have been made in the location of parts of this road. In 1842, the road west of Cathcart left the "Old Stage Road" and followed a new route for a few miles. There is also the major change west of Brant-ford where the old Oak Hill section was abandoned for the long hill climb past "the back-street of Mt. Pleasant Road".

Almost no historic features remain to show that Hwy. #53 was once " The Old Indian Road" or " The Old Detroit Road". It is no longer a " trail" in the sense that nostalgic hikers regard a "trail". As far as I know, no one claims to have heard the tramp of American freebooters, the flatulence of overworked " freight horses" or the roar of Burford bootleggers' big Hudson touring cars. Few people will recall the summers when oil was sprayed on the road and dragged into houses.

All things change for the best but let's not forget, amid all the "hoop-hurrah" over the "Trans-Canada Trail Relay 2000", that Burford was an ancient "trail" of its own.

Information concerning the history of Hwy. #53 was obtained from the Dominion Archives, the Ontario Archives and a number of historical books. 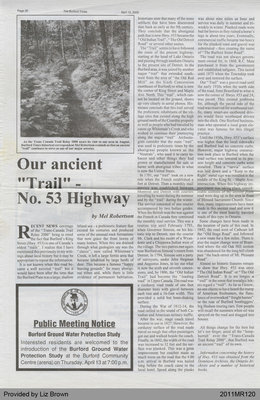