Creator
Robertson, Mel, Author
Media Type
Text
Item Type
Articles
Description
From the 1970s through the 1980s, Mel Robertson wrote many articles for the Burford Advance and Burford Times on the history of Burford Township. This clipping contains the article April - The Flirty Month. The article may not have been republished.

IN HER INTERESTING BOOK about family celebrations, Sarah Breathnach uses the old-fashioned word "flirty" to describe the month of April. She uses this description because she feels that the month uses fine weather to lure people out-of-doors and then drenches them with sudden rain showers. However, "March winds and April showers bring forth May flowers", so we can forgive the quick changes of the month.

April, of course, includes many events that are contradictions. It begins with April Fool's Day (or All Fool's day) and then proceeds through Easter, the most holy of Christian times, the sacred Jewish Passover, and such mundane days as Arbor Day.

Easter, with its meaning and celebrations, is well-known to the Christianpeo-ple and the Passover is of equal reverence to people of the Jewish faith.

Arbor Day seems to have had its origin in recent years to an unofficial holiday when people begin to clean up winter trash, examine their bulbs and replace any shrubs that have not survived the winter. It does not have any particular date set aside on our calendar.

In earlier times before the invention of labour-saving household things and entertainment facilities such as computers, computer games, television, etc., April could be a very difficult time for young mothers since frequent April showers kept children indoors where

"rainy day" emergencies, "rainy day cupboards" of special things were devised for use only on "rainy days". These could consist of special toys, special food and special books. Most children of my childhood experienced these things in one way or another.

I recall one special "rainy day" that lasted for 30 days. This was when we were quarantined for scarlet fever. My sister Emilie and I, along with Mother, were confined to my grandmother's house (now the site of the Burford Insurance office). There our "rainy day" treat was a large navel orange at 4:00 p.m. every day. This may not seem to be much in 1998, but it was an anticipated treat in those days and we awaited the special time with considerable anticipation.

Other people will recall other "rainy day" treats and will wonder now, as I do, why such simple things could be remembered and why our Mother insisted that the treat be given only at an exact time. The use of "rainy day" treats was regulated very strictly when I was a kid. This was important in order to have "special" things for the relief of indoor boredom.

Another "rainy day" occupation was the making of scrapbooks that today may be found in older homes when the attic is being cleaned. Scrapbook making did not require many things. All that was needed was a pair of scissors, a pot of glue, an old school scribbler (never a new one) and a pile of old newspapers and magazines. When these things had been accumulated, mothers would suggest that the children start a scrapbook of Uncle Wiggley stories or a collection of Sunday School tickets. This would occupy the kids until the rain stopped and would result in a heap of cut-up Expositors. Some gender rivalry was created by the movie stars such as Mary Pickford and boys wanting exclusive displays of sports figures such as Ty Cobb or Howie Morenz. Many Burford houses were fortunate in having living-in "rainy day" help in the form of grandmothers and unmarried "aunts" who were always ready to read to children, tell make-up stories or organize games. This was all part of "the different old days". Now if there are live-in grandmothers and "aunts", the computer-trained kids would be entertaining them instead of the other way around.

Probably the most important April event in "the different old days" was Easter which ranked with Christmas by the number of mythical things that took place. While churches and Sunday Schools tried to make children familiar with the religious aspects of the day, commercial interests were hard at work selling Easter bunnies, Easter eggs, Easter chicks and things that really had little connection with the religious aspects of the time. In some houses Easter decorations were saved every year like Christmas decorations and children were allowed to set up nests in anticipation for the Easter Sunday morning egg hunt.

Chief among the Easter decorations in many houses were the large, fancy, rock-hard, sugar Easter eggs which no family with any sense of gastric problems would let a child lick or try to eat. They were just set out so that kids could say "Wow" and "We've got a bigger one at home". Looking back I often wonder why kids who had such training in Sunday School and from "Hurlbert's Stories of the Bible" let themselves be "suckered into" these semi-pagan things. I do remember, though, that most kids of my time had a considerable amount of fear about Good Friday and what it commemorated.

Another April event that is listed by Sarah Breathnach is Arbor Day, but as far as I can determine such a day was never officially listed in Canadian calendars. In Burford it was, and is, an informal celebration held whenever some individuals or groups feel that they can spare the time to plant a tree. In earlier times it was any day in April when the Burford Public School (Maple Ave.) caretaker, Sam Smye, felt that he needed help to cleanup the accumulation of trash that had piled up in and around the school during the winter. I have written about these Arbor days in a previous article and all I will say now is to recall the joy we had in being free from the military boot-camp discipline that governed us every school day. It was a day when teachers knew that they had "suckered in" kids to clean up their winter oversights and that swats with a pointer or strap would not hasten the cleanup.

A perusal of old Burford papers reveals some unusual April news. For example, on April 2, 1886, a Mt. Zion correspondent reported that an axe battle had taken place at a local woodlot between some disgruntled axe-men and their employer. This would seem to have been a major news item but it was "sluffed off by reporting that calmer heads had prevailed before any were chopped off... On the same date, the most newsworthy event in Burford was the erection of a new sign in front of the local "Diamond Shaving Parlour" which would hardly seem to have been as eye-grabbing as the "axe battle". I don't know where the "Diamond Shaving Parlour" stood, but its grandiose name would seem to belie local custom at the time, for few men went to a "shaving parlour" to be shaved. Indeed, among the skills that men bragged about in those days was the ability to keep a fire going, the skill to carve a roast of beef, and the art of keeping a straight razor properly "honed".

Every man who fancied that he was a "gent" had several good razors, a fancy shaving mug and a honing strap to keep the razors sharp. If, of course, the "Shaving Parlour" name was the alias for a barber shop, it is worth noting that in 1886 most men and boys had their hair cut at home.

Another feature of early April newspaper reporting was the apparent feeling that April was the beginning of the "courting season" and columns were full of items about whose rig was seen driving to whose house, who was being "walked home" after choir practice, and who was being welcomed or "got left". Some of these items would seem to be downright libellous and now and then threats of a "punch in the nose" or a "furious kick" would be noted.

Later April news always included the time when men began to throw baseballs outside the local hotels and the annual announcement when some local sportsman had leapt into the drain west of Burford and "rassled out" a 10 pound pike. Then the paper urged men to gather along the drain to see who would win the annual fish fight.

April news changed with a change of newspaper ownership and, by 1915, rave notices were being given to the packed audiences that were being drawn to the presentation of the cantata "From the Manger to the Cross" by the 50-voice Burford Methodist choir and orchestra. Good coverage of "Song Services" and other musical events showed the musical interest of the new editor.

However, other coverage was not neglected. For example, in April 1915, the Advance reported the resignation of the Burford Public School caretaker over what he considered was a written insult to his integrity. He said in his letter of resignation that, since a teacher had written "Find the common denominator" on the blackboard, she was suggestiu£.that he had stolen it.

Of a more serious nature was a report that the manager of the Scotland Crown Bank had been beaten up by two Kelvin men who had been denied a loan. Area feelings ran high and to lower them the "Advance" suggested that, for the sum of 85 cents, the popular phonograph record "Tip Top Tipperary Mary" could be purchased at Bartons in Brantford or that the music of the many local bands and orchestras would "brighten the way".

Another memorable April event was the lengthening of daylight after supper which allowed children to escape from the rather confining lamp-lit houses. I have written about this time of year before as well as the sunny day hikes our "Aunts" arranged to the pussy-willows by the second drain west of Burford and the wildflower beds along the woodsy part of the 7th concession. No more need be said.

Looking at 1998 April, I doubt if the word "flirty" could be used to describe it. Such a word would certainly not be used in modern popular songs. Electronic progress has lessened the "unpredictable" nature of the month as, for most people, electronics such as computers, computer games, television, etc., have eliminated "rainy day" hazards for children and adults. In the 1920s people sang the very popular "It ain't gonna rain no more", but I am sure that in 1998 such a song would not be considered "politically correct" unless it could be referred to the Supreme Court.

Maybe all that can be safely said about April is to repeat the old jingle, "Whether it's cold or whether it's not, We're going to have weather whether or not". 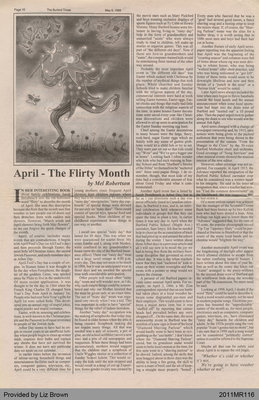