Creator
Robertson, Mel, Author
Media Type
Text
Item Type
Articles
Description
From the 1970s through the 1980s, Mel Robertson wrote many articles for the Burford Advance and Burford Times on the history of Burford Township. This clipping contains the article Robins. The article may not have been republished.

NOW THAT WINTER is just about over, people are beginning to report the arrival of robins and, although we know that some robins stay here all winter, nonetheless these reported sightings give us our usual warm feelings about the arrival of spring.

Robins exist in several varieties in various parts of the world but, since I am not an ornithologist, I will confine my meagre knowledge of the bird to the English Robin, the Canadian Robin (Turdus Migratorius) and my tame robin "Lucky".

The English Robin, which inhabits many parts of England all year round, is slightly smaller and shorter than our robin. It has a bright red breast like ours, but its other plumage is more subdued. To make a comparison with any of our birds, it is a bit larger than our sparrow.

Like holly it adds a touch of colour to drab winters, and like holly it has accumulated a considerable degree of reverence and awe. Chief among the feelings of religious reverence are two bits of folklore. One of these is that the robin got its red breast when it tried to remove the Crown of Thorns from Christ's head at the Crucifixion. The other is that the robin with its mate, the wren, were present at Christ's birth and added feathers and moss to the manger. There is also the old belief that anyone who sees a robin before noon on Christmas Day will have good luck for the coming year.

On the sinister side of folklore, it was believed that if a person killed a robin a lump would grow on their arm, and if a robin died in one's hand that hand would shake for the rest of a person's life. An even more sinister

belief was that if a person received a card with a robin on it, they would die within the year. This was a most unusual supciststiuis tor, when Christmas postcards were invented in the mid-19th century, many contained robins and holly as symbols of good luck.

Yet another side of robin mythology was the association of the bird with charity. Dinners for the poor were called "Robin Dinners"; Robin Hood was extolled because "he robbed the rich to feed the poor"; "Robin Goodfellow" was a friendly fairy who did good deeds for the poor; and "Robin of the Green" appeared as a comic figure in pageants. Still further, when letter-carriers were introduced into English Postal service, their red coats and vests led them to be called "Robin Red Breasts".

Robins appear in literature of all sorts including prose, poetry and song. The Oxford Dictionary of Quotations lists over a dozen references to robins. Personally, I can recall two poetic references to robins I heard every year during my childhood. When the first snow came Dad would say, "The north wind will blow and we will have snow and what will the robin do then, poor thing?" Then when spring came he would say, "Rollicking Robin is here again. What does he care for the April rain?" Then, early in school, we were introduced to the horrible poem, "Who shot cock Robin? I, said the sparrow, with my bow and arrow. I shot cock Robin". Then, as we grew older and attended garden parties, we were sure to hear soloists sing, "The Robin's Return", "Robin Adair" or some other sentimental song involving robins.

As far as I can determine, there has been no Canadian folklore about robins other than a general feeling that robins are special birds who are entitled to care and consideration. Indeed during the early 1900s when newspaper editors and naturalists deplored the way boys roamed the woods shooting anything that moved, there were never any reports of robins being shot. "Bird-nesting" or stealing birds' eggs was a common practice, but it was a serious offense to be caught stealing robins' eggs. In one such case in the early 1900s, a Bur-ford boy was caught stealing robins' eggs. He was brought before the local magistrate and fined $4.50 plus $5.00 costs. This may seem to be a piddling amount of money in 1998, but at the time of the fine the sum of $9.50 would represent more than two weeks' wages for most workmen. Thus, not only did the kid receive the heavy hand of the law, but undoubtedly received the heavy hand of his father on his butt.

My adult association with robins has involved one bird we named "Lucky" who came to Shirley and me one wet windy morning 12 years ago. He had been blown from his nest during the night and had taken refuge under one of our evergreens. When Shirley and I went out, we heard his lamentations and, although we did not know how to care for such a little bedraggled mite, we knew we could not leave him to the roving cats. So Shirley nestled him in a Kleenex until I got an old birdcage from the basement and created a nest with an old sock and some more Kleenex. He "seemed to like the arrangements soon was demanding food. We were at a loss as to what would be the best food, but we tried a cut- up earthworm which he enjoyed greatly and demanded more. From then on he needed several feedings a day and I was reduced to crawling about our lawns looking for worms.

In due course "Lucky" demanded freedom from the birdcage and was soon flitting about the room I call my office examining my books and giving a critic's opinion to my writing by pooping in my typewriter. Then one day he demanded that we let him out and he spent the day flitting about our yard. In the evening he asked to be let in, but the next day when we let him out, he stayed there. However, despite his freedom, "Lucky" remained our close friend answering our call and following us as we walked around the lawn.

As fall approached we began to wonder how Lucky would react to the colder days. We had no need to worry for one day when we called he did not come and we found his white tail feather on our front step. We knew then that he had departed for warmer places. We quietly wished him the best on his long journey and occasionally, during the winter, wondered how he was making out.

Then one spring morning we found that "Lucky" had been "making out" extremely well during the winter for he appeared at our back window with a handsome mate. After the usual greetings they set about building a nest in an evergreen just outside our bedroom window. We watched this activity closely and eventually a number of chicks were hatched. Then we watched the feeding with considerable humour as "Lucky" took over the lawn-crawling task of finding earthworms. This went on all summer and every time Shirley or I went out "Lucky" or his mate or a chick would accompany us.

When fall came, another white tail feather was left on our front step and our bird family was gone. This has gone on now for 12 years and, although I understand that the life-span of a robin is about 10 years, we liked to think that it was still our "Lucky" who could remember the birdcage, the chopped earthworms and my typewriter. While Shirley is no longer here to share these fantasies, they help to brighten the drab pre-spring days.

Looking back at my association with "Lucky Robin", I have to wonder who was the most lucky or fortunate? Was it the little wet bird Shirley and I found before the prowling cats or were we the lucky people who enjoyed all those years of friendship and amusement he gave us? Probably the good fortune was equally divided, but just now a bird flew by my window. Maybe it was "Lucky" or one of his descendants. Maybe spring will be here sooner than I had expected it. 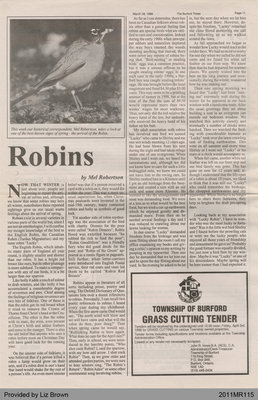