Creator
Robertson, Mel, Author
Media Type
Text
Item Type
Articles
Description
From the 1970s through the 1980s, Mel Robertson wrote many articles for the Burford Advance and Burford Times on the history of Burford Township. This clipping contains the article The Return of Turdus Migratorius. The article may not have been republished.

NOW THAT THE "Wiarton Willy" scandal has been solved, we can look forward to our annual invasion by "Turdus Migratorius". I am not referring, of course, to the big tankers of Toronto sewage that crowd our main street every summer, but rather to the well-known robin whose scientific name is, unfortunately, "Turdus Migratorius".

This charming little bird has been our harbinger of spring for many years, even though some people delight in telling us that some robins stay here all winter. However, most of us ignore such revelations and look forward to our first sighting of a robin.

A number of birds known as robins exist but I will confine this article to two of them - the Canadian robin and the English robin. While these birds share the same name, they have few similarities. The English robin that I have seen while in England is a bit smaller than ours and its red breast and other colours are less pronounced. Furthermore, they stay in England all year round.

Like our robin, the English robin is a well-loved bird. Indeed, when penny-post Christmas cards were invented many included robins along with turkeys, geese, Father Christmas and long-drawered dancing girls. For our part, few robins appear on old penny-post cards.

A considerable amount of prose and poetry has been devoted to the robin. In the spring there is a poem saying, "The rollicking robin is here again. What does he care for the April rain?", and "The north wind will blow and we shall have snow and what will the robin do then, poor thing?" Then there is the gruesome child's poem, "Who shot cock robin? I, said the sparrow, with my bow and arrow, I shot cock robin". Books for children contain many references to robins such as "Christopher Robin", "Robin Red-Breast", "Robin Hood" and "Robin Goodfellow". There are also flowers called "Wake Robin" and there were songs such as "The Robin's Return" and "When the Red Red Robin Comes Bobbin' Along". Indeed, "Turdus Migratorius" has outlived its unfortunate scientific name in

many ways and, generally speaking, seems to be a well-liked bird.

When I was a kid, the arrival of the first spring robin was the subject of great boasting for there was little else to do in those far-off days after the excitement of Christmas had worn off. To put in the time of the late winter and early spring, kids looked for the first robin and the first crocus. Other amusements were few. Girls could skip when the sidewalks got dry, but boys' entertainment consisted of aimless running looking for the first robin and the first crocus, and the kid who could yell loudest that he had seen the first of either spring appearance could be sure of having the first swat at a ball when the ball-playing season began. This sounds silly in 1999, but we didn't have computers in those days to show us how to make pipe bombs. Indeed, the only thing "cool" about the times was the weather.

The Canadian robin is a member of the thrush family of birds and, according to the Readers Digest "Book of American Birds & Animals", inhabits most of the North American continent with most of the northern robins flying south in the winter. The robin is well-liked in most the places it inhabits as it is friendly and eats many grubs, insects and worms that injure plants and crops. The only "knock" I ever heard about robins was in the days when most people had a cherry tree. Then it was said that robins lived only on cherries and people invented many devices to frighten them away.

Several years ago, my late wife Shirley and I had an interesting experience with a robin. One morning, after a night of wind and storm, we heard loud plaintive cries from under a nearhv evergreen. On investigating we found a good-sized robin chick who had been blown out of its nest during the night. Shirley nestled it in some Kleenex and I got an old birdcage out of the basement. In this we made a little nest of Kleenex and straw and we gave it milk with an eye-dropper. Neither of us knew anything about raising a young bird but we felt that we could not leave the poor little thing to the cats.

To our surprise, the bird settled into its little nest and soon was demanding food with loud squacking. We fed it with the eye-dropper until it indicated that it wanted something more substantial and we made up a mush of chopped earth worms. This was greatly favoured and soon it was demanding frequent feedings of whole worms and I was crawling around the lawn every morning looking for them.

As the days passed, "Lucky" (as we called it) began to want out of the cage. We let it out and soon it was flying around the room I call my office and demonstrating its opinion of the stuff I write by pooping in my typewriter.

Then a day came when "Lucky" sat on the window sill and wanted to go outside. We let it out and it spent the day in the yard but wanted back in for the night. The next day we let "Lucky" out again and this time it stayed out but followed us around every day looking for handouts. This went on all summer and we (all three) enjoyed it.

Then, one day in the fall, "Lucky" was not there and we knew that he had taken off for warmer climes. However, on our front step we found one of its white tail feathers as a sort of a "thanks and goodbye".

During the winter we wondered now and then how "Lucky" was faring and if it would return. We called it "Lucky"

because, in our ignorance, we did not know if our robin was male or female. However, in the spring our doubts were removed for one day there was "Lucky" with a handsome mate. He seemed to be very pleased with himself and brought his companion up to my window. I am sure that if he could have smiled he would have done so and said, "You call me "Lucky", and see how lucky I have been."

Then, after a few days of prancing around our lawns, the happy couple began to build a nest in an evergreen that used to exist at the end of our conservatory. This was close to our bedroom window and we watched the connubial activity with interest. In due time a couple of chicks were hatched. This gave us four robins to watch in our spare time as Lucky and his mate gave us lessons in the proper way to stuff earthworms down open beaks, and soon a little family of four followed us around whenever we went out.

As the year progressed we began to wonder how the trip south would be managed. The departure came in early October and, once again, a white tail feather was left on our front steps. The next year Lucky returned with one of the chicks but there was no more nest-building. However, both robins accompanied Shirley and me whenever we went out and, in the fall, a white feather was left on our steps.

We still get a couple of robins every year but, since over 12 years have passed since we found Lucky, I doubt if he is either of these friendly birds. My only memento of Lucky are the white tail feathers he left every year.

I wonder sometimes what became of Lucky and, when I do, i think of the byrrm we

odist Sunday School long ago. One of its verses contained the words, "God sees the little sparrow fall. It meets His tender view." Then I hope that these words also apply to the friendly little robin who gave us so much pleasure in difficult times.

Before closing this article, a few words of explanation may seem necessary. To those readers who may wonder why I chose the title I did, I would point out that, as a person who has written for publication for over 40 years, I know the value of an "attention-getter". To experienced and knowledgeable "Birders", I admit quite clearly that I am not an ornithologist and know nothing about birds. However, when no one but my dachshund "Betsy" is around, I talk to chickadees with the hope that someday one will brighten my winter by coming to my hand for food, and I take pleasure in the sudden flash of a bluebird's wing.

Birds, and particularly robins, seems to be well-received inBurford for every year people with lawns have resident robins bouncing around. However, this was not always the case, for early papers note the popularity among young boys for "birding" or collecting birds' eggs. The shooting and stuffing of birds was not uncommon and, when I went to Burford High School, an old bachelor who lived on the Harley Road donated a large glass case of stuffed birds that included robins. At about the same time, a local professional man who stuffed birds thought nothing of shooting a bird on someone's window sill.

Thankfully, those times have passed and my only bird thoughts on this snowy morning are to wonder if "Turdus Migratorius" has decided to postpone its annual migration. 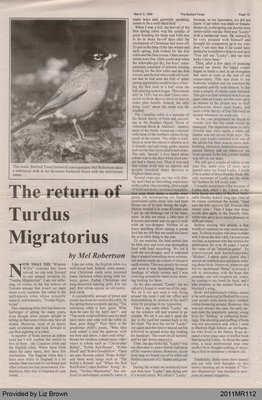