Creator
Robertson, Mel, Author
Media Type
Text
Item Type
Articles
Description
From the 1970s through the 1980s, Mel Robertson wrote many articles for the Burford Advance and Burford Times on the history of Burford Township. This clipping contains the article October - Time of Change. It describes October events in Burford in the 1920s. The article may not have been republished.

Having just said farewell to the month of October, a month of unpredictable change, it is interesting to note the many meanings this month has for people.

To the Romans, it was the eighth month of the year, and to us it is the tenth month with as many of the unpredictable changes the Romans expected. To those of us who regard the year like a day with January the dawn, July the noon and December the night, we note October as the beginning of twilight where we can expect a few summer hours and a few winter blasts. It is also a month that is squeezed between two great Christian festivals for Sept. 29 honours St. Michael, the great defender of our Christian faith, while Nov. 1, All Souls Day, honours departed saints and loved ones. As early autumn, Keats described the time as a "season of mists and mellow fruitfulness", while someone else wrote that it ushered in "wailing winds and naked woods". To most of us it represents a tune when we look out in the morning and wonder what the day is going to be.

Looking back at old Burford papers, most October issues are dominated by news of the Agricultural Fair whether

it was the Burford "Show", the Harley "World's Fair" or the Cathcart "Exhibition". Since the Cathcart location of the Fair seems to have been short, the Harley and Burford locations dominate the news. In the "Harley Haps" column, much space was given to the speed with which the Agricultural Society established a four acre fairgrounds north of the village complete with an excellent exhibition building. In addition, much praise was given to the chickens, sides of beef and pumpkin pies that the hotel would provide for the hundreds who attended the Fair. After-Fair attention was given to the drunken horse-racing that took place on the road to Burford when in, almost total darkness, tipsy young drivers tried to prove that their horse was faster than someone else's.

After the Fair moved to Burford, much newsprint was given to the two bands that were always present - the 25 Regiment Band from Brantford and the Burford Citizens Band. These bands took turns playing lively music with the Burford band under newspaper editor Andrew Messecar, a local composer, playing only marches, waltzes, etc., that he had composed. In

the evening there was always a big " Show Night Concert" in the Barnea Hall with professional talent organized by Burford entrepreneur "Pap" Johnson who ran some Brantford theatres and had connections with the Ambrose Small company of entertainers. I have written previously about Burford Fair and will not repeat myself other than to say that this excellent exhibition has been a great asset to the community, drawing thousands of people every year.

Another popular October event in earlier days was the annual "School Opening", an occasion that seemed to cater to adults more than children. According to reports, large numbers of adults would assemble at local schools during the first week of the month. Big meals would be prepared on school stoves and every local M.P. or candidate for the November election would give long speeches praising themselves and the British Empire. Paper accounts make little reference to school work and one has to wonder what drain clearance had to do with the "3 R's".

Oct. 5, 1869, was a day when Burford was almost totally evacuated. This was due to two important events. One was the visit

of His Royal Highness Prince Arthur and Gov. Gen. Sir John Young to Brantford. The second and possibly the most important reason was that the Burford Cavalry Squadron had been chosen to provide the Royal Escort. This drew the attention of many Burford area people whose husbands, sons and fathers belonged to the militia and they went to see how "the boys" would make out. They were certainly not disappointed in what they saw for the Burford horsemen were chosen as escorts for several other Royal personages and became noted among the five best cavalry units in Canada.

Of "a semi-military nature were the activities of the Burford Boy Scout Troop in the early 1900s. This organization featured weekly orders in "The Advance" that were certainly " militaristic". For example, on Oct. 7, 1910, the Scouts were ordered to assemble at the Maple Avenue Public School grounds where under the command of their leader and his noncommissioned officers they would march, singing patriotic songs, to Parnell's Woods two miles north. There they would complete one hut, start another and lay out a parade grounds where military drill stave "ractice and sword exercises could be carried out. Then there would be a campfire meal with lots of "sandy Scout tea", followed by a march back to Burford accompanied by such patriotic songs as "We'll never let the old Flag fall". In reading these old Boy Scout news items, one cannot but notice the difference between Scout activities before World War I and the very successful "Moot" that was held at Lions Park recently with its informality, coeducational attendance and the absence of military activity.

October activities of a sporting nature appear in many old papers. One of these was on Oct. 20,1920 when an afternoon of harness racing was witnessed by over 2,000 at the fairgrounds track. A card of five races was planned, but due to the fact that one race required five heats, the card could not be com-pleted before darkness fell. There was no organized betting at these races, but there was a lot of "bet you ten my horse can beat yours". This alarmed kids of the day for they were taught at Sunday School that betting on horses, masturbation and swimming on Sunday were major sins and, when kids heard bets being made, they expected Divine retribution of some sort to

take place. Another October sin was to burn your leaves on Sunday when "Divine retribution" would consist of a visit from an "Indignation Committee" ordering immediate extinguishing of the fire.

Other Burford area sporting events of a "non-judgmental" nature took place during the Octobers of the 1920s when the Burford area Softball team was always in contention for the U.F.O. (United Farmers of Ontario) championship. The United Farmers of Ontario were very active in the 1920s, not only in agricultural things, but also in baseball and Softball (fast-ball) competition. The Burford area team consisted of Smith -pitcher, Smith - catcher, Cunningham - 1st base, Foster - 2nd base, Beemer - 3rd base, Westcott - short stop, Eddy - right field, Stevenson - left field and Peckham - centre field. These players, who came from several parts of the Township, won the cup on many occasions and later a Woodbury team gained permanent possession of the cup. Games were played at the high school diamond and drew large crowds.

October 1909 was a bad month for the Burford area due to The on-and-off electrical service that was caused by the little local electrical company endeavouring to install a larger generator and wheel at the "Red Mill" north of the village. This was a major job that was slow due to late delivery of equipment and a lack of expertise. Work was interrupted in many ways and finally came to a complete halt when one of the workers was killed in a fall. People who had become familiar with the advantages of electric power began to protest and to question the ability of the little local company to provide reliable service. I have written about this before and will not repeat myself other than to recognize the ingenuity of our pioneer electricians to make something out of almost nothing.

All Octobers have ended with the pagan festival of Hallowe'en. It has been observed locally in many ways ranging from the simple " 4 to 6" house par-ties where children in homemade costumes "bobbed" for apples in dish pans full of water, pinned tails on a paper donkey (or on grandpa), and came home loaded with fudge and popcorn, to the ritual upsetting of backhouses and the blocking of King & Maple with wagons, gates and other moveable objects. People

accepted this with a yawn. The only objection noted in local papers was in the early 1900s when the "Advance" took great exception that some of the backhouses had been upset by adults under the influence of a drop of the "Old Hoop-Iron". Such pranks were apparently acceptable as long as kids did them. In later years, vandalism of an unpleasant nature began to take over the traditional activities and many will recall the horrible night in the early 1960s when a mob of about 200 out-of-town-ers invaded Burford, shooting out street lights, smashing windows, wrecking autos and finally burning a bam on Andrew Street. This was really a very serious Hallowe'en that could have resulted in fatalities for I have heard people say that if their home had been attacked in the way some were, they would have been forced to use drastic methods to defend themselves and their family. Unfortunately, police forces were not available to cool the situation and our local constable had his car wrecked. Since then, there has been good police coverage and mob action has been prevented.

Now Hallowe'en activities start with lawn decorations early in October, at-home Hallowe'en house parties have been replaced with "witches, castles, haunted houses and Dracula's dens" run by organizations to raise charitable funds. Trick and treating has become a gut-busting delight and there are no backhouses to be upset. Children parade around in beautifully designed, store-boughten costumes with no dissolving cardboard masks to contend with.

My chief remembrance of Hallowe'en as a kid was when Mother had a Hallowe'en party at our place and my sister and I tried to hide our identity by knocking at our own door. (It didn't work.) Then there was the re-erecting of the high school backhouses we had knocked over the night before. In recent years, it has been trying to prevent our dachshund from kissing every ghostly "trick or treater" who came to the door. My only Hallowe'en relic is an ancient wire false face which I would give to anyone collecting such memorabilia.

So now we have come to the end of another October and set our steps toward the first snow fall and preparations for Christmas. May we face the arrival of November and December with joy and anticipation. 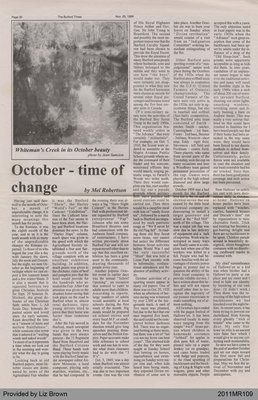