Creator
Robertson, Mel, Author
Media Type
Text
Item Type
Articles
Description
From the 1970s through the 1980s, Mel Robertson wrote many articles for the Burford Advance and Burford Times on the history of Burford Township. This clipping contains the article Life Under the "Big Top". It describes summer vacation activities in the 1920s. The article may not have been republished.

Life under the MBig Top

Now that summer (like me) is on the wane there may still be time to answer readers' queries and get off an article or two about the way 1920s children put in their summer vacations.

In looking back through the articles I have written during the past 40 years I can find references to circuses but no complete article about this major event that shook children up before computers, Nintendo games, TV, the "Net", etc. turned little children into sophisticated pseudo-intellectuals. I refer to summers of the 1920s when "summer vacation" consisted mainly of orders to "get out of my way" and "play-situations" made up from the imagination we had gained from the books we read or the stories "aunts" told us. There were, of course, picnics to Port Dover or Mohawk Park and a few garden parties, but there was nothing that really shook kids up like a circus in Brant-ford.

In writing about circuses I realize that they still exist but not on the scale they existed in the 1920s. Electronic progress has now made it possible to view all sorts of acrobatics and PBS films will now permit you to look down the throat (or up the rear end) of a tiger without having to endure the danger involved, and for those who like to see scantily-dressed women trying through the air all they have to do is tune into "Crotchwatch" (or is it "Bay-watch"?). Times have changed and now animal rights groups object to the conditions in which animals are displayed. Yes, circuses still exist, but more as an adjunct to charitable organizations rather than to the "whoo-hurrah, shell-game" thing they used to be.

Word that a circus was coming was usually received in about April when word would go around the "Playground Telegraph" giving the name of the circus, the date of its arrival and its Brantford location. For people who are not familiar with the term "Playground Telegraph", it referred to the mysterious, non-electronic way of information about coming events circulated among children in the 1920s. These were not earth-shaking international things, but when the ice on the creek was thick enough to skate on, when the creek was warm enough for a swim and when chestnuts

were beginning to fall.

Yes, that was the way news about a coming circus got around and every kid's ears got bigger as the marvels were predicted. Plans were made about seeing the parade and attending the afternoon performance. Then some smart-ass would dampen our enthusiasm by declaring that his father intended to take him to the "unloading" of the circus train - a stirring event that took place at the Brantford RR station around 6:00 a.m. This involved weary elephants pushing fancy wagons, lions, tigers, camels, monkeys, etc. It apparently was a sight to behold but one that many fathers avoided lest the circus stevedores might utter some phrase we would not hear in Sunday School. However, it was a great bragging point to pretend that you were going to the "unloading".

The next event in the "circus day" was the "parade". This consisted of gaudily-deocrated wagons drawn by beautiful teams of horses. In the wagons were the wild animals and on their roofs were seats full of acrobats and other circus people. Clowns walked alongside trying to be funny. At the end of the parade there was always a steam calliope or "steam piano" on which a so-called "professor" played loud, tuneless music. People are judge from the parade if the circus was going to be worth attending.

The usual site for a circus was an open area in Eagle Place which I imagine has been build over many years ago. There the money-talking began with a charge to enter the grounds, another to get into the animal tent, and yet another get into the "Big Top" where there might be

an additional charge for a "reserved seat". The additional charges often drew protests which would immediately draw a bunch of circus employees who would solve the problem by beating up the protestor and throwing him off the grounds. City police never interfered as strong-arm tactics at circuses was the "going" thing. No, you "paid up and shut up" before you got a left and right to the nose and a kick in the pants.

The animal tent was always a big attraction for kids could throw peanuts to tired-looking elephants. Kids walked around hoping that an elephant would make a deposit for when that happened the keeper would give free tickets to the "Big Top" to any kid who would do a pai4-and-shovel job on these gigantic piles of waste. Bringing a pail of water to elephants was also worth a free ticket even though the elephant might show its gratitude by spraying water on the kid who brought it.

The "Big Top" tent always had three rings for ground acts, a race track for the "Chariot race" and a top full of swings, slides and ladders for the acrobats. I don't remember much about the performances as so much was going on at the same time -clowns hitting each other with "slap sticks" that exploded, "Lion tamers" lash-iriff at linns with whins, acrobats sliding head-first down tight wires, beautiful horses racing by, camels sneering as only camels can, smoke-emitting "tin Lizzies" and a fat pompous "ringmaster" who strutted about trying to pretend he was running the "show". And over all a loud band played "Col Bogey's March" (An appropriate tune - you know the words: "B.S.

was all the band could play").

Finally it was over and you staggered home with a bag of peanuts and a little balloon on a stick.

There was always a night performance which cost more and was supposed to include acts not shown in the afternoon performance. I attended only one night performance and the reason for that extravagance was the appearance of Tom Mix, the movie cowboy star. Cowboys were very important people in the lives of little boys in the 1920s for when they could afford to attend a Saturday afternoon "matinee" in the "Temple" or "Brant" theatre the film usually involved such cowboy stars as Tom Mix, Ken May-nard or Hoot Gibson. Consequently, to have seen Tom Mix in the flesh was a bragging point that could not be exceeded. Three or four of us went to this show hoping to see Tom lasso "critters" or shoot at rustlers. However, we were disappointed for Tom and his entourage of whiteclad horsemen made one circuit of the "Big Top" track, firing their "shootin' irons" as they galloped along. Then Tom posed for a few seconds in a spot-light and then took off, leaving kids full of "Did you notice?" questions. After that disappointment we went to the RR station to watch the circus would want to live a "circus life" day in and day out.

Then we piled into the Bowermans' big Studebaker touring car wondering if the little soggy balloon on the stick with the circus name on it would hold out until we had finished bragging about an event we really hadn't enjoyed. 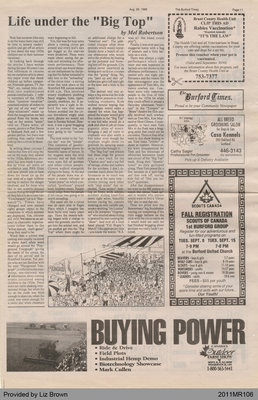