Creator
Robertson, Mel, Author
Media Type
Text
Item Type
Articles
Description
From the 1970s through the 1980s, Mel Robertson wrote many articles for the Burford Advance and Burford Times on the history of Burford Township. This clipping contains the article Recollections of Burford High School. The article may not have been republished.

I entered B.H.S. in the fall of 1928 and left six years later. My six-year stay was due to the fact that, since the school had only four teachers, it could not give classes in all the subjects required for Senior Matriculation and entry to university. Consequently, about six of us had to fit in classes whenever we could. I had three courses in my last year and had to take Ancient History on Saturday mornings. A friend had to take Physics after 4:00 p.m.

School population numbered about 90 with most students concentrated in the first three "Forms". One of

the main reasons for the small population was the fact that there was no school bussing. Some students from the southwest came on the 8:00 a.m. train and left on the five o'clock "Express". Others drove horses and buggies, and bicycles were used when the roads were passable. There was a greater number of girls in the higher "Forms" for there was a feeling that, unless a boy intended to become a teacher, a doctor, a preacher or a lawyer, he did not need more than a couple years of high school.

Burford High School in my time was a slightly modified version of the "boot-camp" attitude that prevailed in Burford Public School. There were no daily parades, no "left-right", "keep your hands behind your back" crap, but there was strict sexual segregation that would seem silly today. To begin, there were separate "Boys" and "Girls" entrances on opposite sides of the school. In-' side there were separate staircases, separate drinking fountains, separate lunch rooms, etc. Boys and girls were not allowed to use the gym or the library at the same time, boys and girls were not allowed to sit at the same table in the science room or in the few double desks in classrooms. At noon the upper floor "Assembly Hall" was reserved for girls. Outside there were separate playgrounds and mixed ball games were not allowed. This even applied to a rather bumnv tennis court. This ridiculous code was applied to the occasional social evening when checkers, dominos and crokinole were permitted, but no games involving a standard deck of cards. Dancing was forbidden as a structural and moral offense. Structurally it was said that dancing might cause the school to collapse and morally it was declared that some taxpayers considered dancing to be a deadly sin.

Sports equipment was almost nil. It consisted of a football and a few bats and balls. There were no teams, although in the early I930's I and another boy organized a basketball team and entered it in the Brantford Church league. We were told not to call it a High School team, but our mothers made us shorts in the school colours of blue and gold. We finished fifth in a ten-team league, but could not continue the next year as it was too hard to get transportation to games in the Brantford YMCA gym.

For some reason the school had a full set of dumbbells and "Indian Clubs". This equipment was apparently thought to be of moral use in making boys "manly" (I don't know what was expected of girls unless it was to help them stir up a good pudding.)

The only student organization was the Literary Society that held an election every Fall and was seldom heard of afterwards. Shakespearian plays were put on for a few years, but were reserved for girls as the teachers concerned barred boys on religious grounds.

An "Initiation" was held by boys every fall in which newcomers were beaten and hauled through the streets. There was also considerable animosity between "town" and "country" boys with frequent wrecking of "town boys" bicycles and occasional fist fights.

Smoking on the school grounds was a "capital" offense, but boys smoked during the daily 15-minute recess outside the "Boys" "lurried a blind eye". This area was called "6th Form". I don't know if any girls smoked as no boy would have dared to ask or try to find out.

The few teachers, apart from the principal Mr. Judge, were remote and unfriendly. They took no part in community life. On the other hand, Mr. Judge was the exact opposite as he took part in many community organizations including the operation of a weekly "moving picture show" on Friday nights at the school. He could also teach any subject with great skill using his "I knew a man once" anecdotes to put knowledge into the thickest skulls. Mr. Judge is my best recollection B.H.S.

When I retired from the R.C.A.F. in 1963,1 did a bit of "supply teaching" at B.D.H.S. and found that the amount and type of profanity used in classrooms exceeded anything found in the Armed Forces. I was later a member of the last B.D.H.S. Trustee Board where we had to try to solve problems presented by teachers, students and parents. One unsolvable problem was a complaint from a local woman who had rented a room to a male teacher and found that he was using his bedroom window for toilet purposes.

I don't remember B.H.S. with any degree of sentimental nostalgia. To me it was like a case of hemmoroids - you knew it was miserable while it lasted, but that it-wouldn't last forever. My best recollection is of friends made and kept.

I tend to avoid reunions as I know that the person who has come up to me and said, "Hello, Mel, I bet you don't

know who I am" has two minutes before pointed tome and asked, "Who is that old guy?" 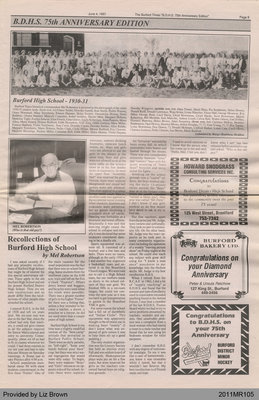