Creator
Robertson, Mel, Author
Media Type
Text
Item Type
Articles
Description
From the 1970s through the 1980s, Mel Robertson wrote many articles for the Burford Advance and Burford Times on the history of Burford Township. This clipping contains the article St. Valentine's Day Revisited. The article may not have been republished.

Last year I wrote an article about local observances of St. Valentine's Day in the 1920s. A considerable number of my readers called to say that they liked the article. However, among the well-wishers was an anonymous letter from a woman in the Woodstock area who declared that since I had written about such a "pagan" holiday as St. Valentine's Day, I would be denied access to heaven. To those who liked my article, I say "thanks". To my critic, whose name I have discovered, I will say that this article is about some of the rather humourous and despicable observances (pagan or Christian) that have grown up around Feb. 14.

It is difficult to determine if St. Valentine's Day observances come from Christian or "pagan" sources. From the Christian point of view, there were a number of early saints and martyrs named Valentine. Chief of these appears to have been a cleric in the 3rd century who was a priest of Rome and later a bishop in, Umbria. He was noted apparently for the kindness he showed to young people who were contemplating marriage. He died on Feb. 14 (year unknown) and this date became known as St. Valentine's Day.

From the "pagan" point of view, some maintain that the date commemorates the Roman feast of the Lupercalia which was held on either the 14th or 15th of February. Lupercalia was hardly a love-feast for it honoured the god Pan who was the god of erotic love. The celebration began with the sacrifice of two goats and a dog. After the sacrifice, the blood of the animals was smeared on the foreheads of young men and the skins were made into whips. Then the young men ran naked through the streets lashing anyone they thought needed forgiveness of their sins. For some strange reason, this lashing was eagerly sought by childless women who felt that it would ensure pregnancy. (Surely there must have been better ways.)

Over the centuries, the two festivals became inter-mixed and became known as St. Valentine's Day (like it or not) and the day was also called "Lovers Day" when people exchanged tokens of love and admiration.

The sending of tokens of admiration in early days was confined to the wealthy who could have such tokens delivered by their servants. Delivery by post in those days was not apt to create love or admiration for the recipient had to pay the considerable cost of delivery.

The introduction of "penny post" in 1840 changed interpersonal relationships drastically for, at the cost of a penny, a "post-card" could be sent. There was no limit on what could be written on a post-card and people who were adept at small writing could get off a fairly long letter. The printing of penny post-cards became a profitable business for the cards included business advertising and tourist promotion as well as Christmas cards, Easter cards, New Year cards and all sorts of Valentines. Christmas, Easter and New Year's cards were quite straight-forward in their illustrations, but the Valentine cards displayed almost any sort of illustration.

I was fortunate a few years ago in acquiring a number of these cards which dated back to the Victorian and Edwardian era. The occasion was when I was helping the executor of the late Nell Shaw's estate to sort out her belongings and arrange them for disposal. Among the large amount of retained correspondence were a considerable number of penny post Valentines. The executor did not wish to keep the cards and gave them to me. It was interesting to note that hardly any of the Valentine cards carried the traditional hearts, Cupids, etc. In fact the only resemblance to a Valentine

card would be the words "Be my Valentine". Some showed railway locomotives, artillery, soldiers fighting people, early aeroplanes, ocean liners, dirty-looking beetles carrying the "Be my Valentine" words. Some even tended on the erotic showing pot-bellied men dancing with chorus girls and female anglers showing their knee-length frilly "drawers" as they tried to land a fish. The only concession to St. Valentine's Day were some showing five year-old kids making eyes at each other and one in which Cupid is about to fire an arrow into a car where a top-hatted gentleman is trying to help a lady get aboard. Of even less "Lovers Day" tone are the written messages on these card such as "I will be home on the 5 o'clock train" and "I have been throwing up all day probably due to your tomato soup". Such notes hardly expressed undying devotion, but apparently the recipient valued them enough to keep the cards for over 70 years.

Another type of Valentine's card was popular among "trashy" cowards in the early days of the 20th century. These were the unfunny penny Valentines that were intended to insult the recipient in the most vulgar manner. I am happy to say that none of the Burford merchants of my childhood would sell these indeed, my father used to say that they were so insulting that any merchant who would sell them didn't think much of himself.

What a contrast there is between these nasty Valentines, the penny post Valentines noted above, and the little frilly Valentines I described in my article last year.

St. Valentine's Day was never a big event in early Burford. It was merely a day in mid-winter when children who lacked the diversions of today such as computers, TV, sports programmes, etc., could relieve the monotony of winter. In other words, children looked forward to the day since there was little else to anticipate. It was a day that didn't require much organization and minimum of expenditure of money... I doubt if many of my readers or contemporaries retain St. Valentine's Day as a cherished deposit in their memory bank.

However, before we forget St. Valentine's Day or condemn it as "pagan", let us think for one brief moment about the dear, long-dead people who took the time to show their kindness by making a little homely Valentine and slipping it under the door of some child who they felt needed a little ray of sunshine amid the drabness of February. 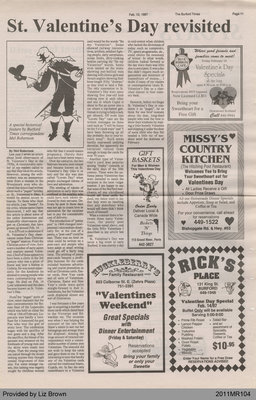