Creator
Robertson, Mel, Author
Media Type
Text
Item Type
Articles
Description
From the 1970s through the 1980s, Mel Robertson wrote many articles for the Burford Advance and Burford Times on the history of Burford Township. This clipping contains the article The Dead Pond. It describes winter activities in Burford in 1920s. The article may not have been republished.

LAST WEEK the first snow came not with a "whoop and a holler" but "on little cats' feet", as someone wrote. Yes, there it was when we got up - a thin white blanket over the faded things of Autumn.

Kids looked out and probably did not give it a second thought as they humped into their big back packs and ran to meet the school bus. However, in the 1920s, the first snow turned the minds of little boys to skating and hockey. Our thoughts turned to ways we could emulate such local area NHL stars as "Baldy" Northcott of Montreal and "Hap" Emms of New York. (Yes, there were area NHL stars before Wayne Gretzky.) We began to wonder if Burford would have an outdoor rink and if the old hockey stick would hold together for one more season of "shinney". Since the prospects of a village rink were always "iffy", we began to wonder how soon the ice on the "Dead Pond" north of Burford would be thick enough to "bear" us while we tried to imitate Howie Morenz, the fastest skater in the NHL.

The name "Dead Pond" needs some explanation as it has a serious and deadly sound to it. It was (and is) still north of Burford. You travel one mile north on Maple Avenue to the bottom of the little hill just this side of the bridge. Then, if you look west through the trees, you will see a straight stretch of water or ice that extends about 75 feet west. This was formerly one of the branches of White-man's Creek which, in the early 1900s, crossed Maple Avenue twice and needed two bridges. However, some time in the early 1900s, Council decided to eliminate one bridge and dug the present channel. As a result, the two arms of the creek were blocked off and became land-locked marshy stretches of water with the "Dead Pond" on the south side and an unnamed stretch to the north.

Why kids named the south part the Dead Pond I cannot say for it was a misnomer. To begin with, the water was not dead for at the west end there were a couple of small springs that kept the water moving and wet the feet of any kid who tried to skate on the thin ice over them. The water was alive for it supported large numbers of mud turtles but no fish, water snakes or snapping turtles. It did not have mysterious depths from which dead bodies, dinosaurs or King Arthur's sword could appear. Its greatest depth was about three feet. There were no accumulations of trash and the sandy bottom always looked clean. The only bits of debris were a few small logs on which the turtles sunned themselves. However, kids never fished there or entered the water to swim or "paddle". For some reason, kids in the 1920s regarded the Dead Pond as a place for winter sports and not for summer activities.

In many ways, the Dead Pond was a ideal spot for winter sport. At the east end there was a gentle slope behind a big willow tree where you could change into skates. Nearby was a large galvanized pipe in the bank that served as the outlet for the waters of the spring freshet that still came down the old mill race. This pipe was big enough for a kid to crawl in and we would build little fires in it to dry our socks or keep us warm. In front of the slope was a circular pond where kids could limber up and see if their skates were on the proper feet before venturing onto the main stretches of ice. Next to this was (and is) a good straight section of ice maybe about 75 by 25 feet which was ideal for hockey. Then the pond made a couple of graceful turns that eventually ended in another round pool beside the bank that edged the artificial channel.

Kids had strict rules to govern these two parts of the Dead Pond. The straight part was reserved for hockey players, while the rest was for pleasure skating. Girls were expected to stay off the hockey part although there were a few girls (now grandmothers) who would grab a hockey stick and hammer the shins of the male chauvinist hockey players. On the other hand, there were boys who always tried to get girls to skate with them

hoping, I imagine, that during the "skate", the girl would curl up her fingers inside their "cowboy gauntlets".

Hockey on the Dead Pond was hockey at its worst. "Sides" were chosen by the kid with the loudest voice, and goals (we called them gools) were made with sticks or frozen cow "pads". Then if someone had a puck, it was thrown in. If no puck was available, a piece of ice or a stone was used. Then everyone went at it "with a right good will". No rules were followed and everything "went" without fisticuffs. During one of these melees, I had my nose broken by one of the earliest "slap shots", but that didn't stop me or the game. When I got home, my folks insisted that I see Dr. Rutherford who lived in what is now Pryor Harris' residence. The Doctor laughed and stuck on a piece of "court plaster", so anyone who thinks I have a silly-looking nose can blame Dead Pond hockey and the casual treatment given to broken noses in those days.

Sometimes when there was a full moon, large skating parties would assemble at the Dead Pond and the ice to the north. These were spontaneous things sparked by "The Playground Telegraph" when word got round that "everyone was going skating" on a certain night. It was not unusual for 40 or more skaters to congregate at the "Dead Pond". These parties were not confined to skating and I recall when I was about 11 that another Burford boy and myself skated by a couple (now deceased) who were making love in a snow bank with their skates on. We were both "beardless youth" and thought they had fallen and needed help. However, when we offered it, the young man said he didn't need any help. I suppose that this was part of "the birds and bees" learning process, but I still can't imagine that, despite the moonlight, a snow bank was an ideal spot for such a demonstration of affection.

On some New Year's Eves, for lack of other amusement, small skating parties went to the Dead Pond in the belief that if anything was going to happen at the stroke of 12, it lift would light our candle lanterns, shoulder our Bulldog skates and head for the Dead Pond. I have written about these expeditions previously. However, since we all had to be home at 9:00 p.m., we never did find out if the stroke of midnight did anything to change our fantasies of the Dead Pond.

So there it was - the Dead Pond where many Burford kids learned to skate. I am happy to note that almost every winter, the hockey part is shovelled off and is still used by neighbourhood children. As far as I know, none of our bunch of skaters ever became NHL stars or challenged Elvis Stojko in performing triple or quadruple jumps. (I don't recall the technical name for these feats of skating skill.) However, the Dead Pond provided a winter sport facility that Burford could not provide and parents knew that when their kids went there to skate, there were no deep holes where they could drown. Parents also knew that the two mile round trip was a healthy thing for kids in winter even though the wind did blow cold at times. However, I don't think any of us lost ears, noses, toes or other appendages during these walks.

Sometimes I wonder why we put up with all this inconvenience for the sake of a few hours of skating. I guess it was because we had nothing better for comparison since there was no artificial ice closer than the Arctic Arena in Brantford. Looking back at those days, I do not consider them to be "the good old days". Rather I think of them as "different" times and wonder if I should admire our endurance or laugh at our stupidity.

And so, kids of 1996, make the most of the wonderful facilities and organizations that exist for your winter pleasure. I think that you will find that skating is one of the most pleasant activities a person can have.

One thing more before I close this article, which will probably be the last I will write about the pleasures of childhood along Whiteman's Creek in the 1920s. I would like to recall with the greatest pleasure and thanks the kindness shown to children by Mr. and Mrs. Bridge who lived in the Haven house at the brow of the hill on Maple Avenue North. Mr. and Mrs. Bridge were very kindly and friendly people who were always ready to supply a drink of water or a kind word to any child who needed them. I would imagine that Mr. and Mrs. Bridge are no longer living, but inherited their parents kindness. It Hugh and Lome are still living, I hope they will accept my thanks on behalf of the other kids who skated on the Dead Pond in the 1920s.

As for the Dead Pond itself, it will always remain "alive" in the minds of many kids. 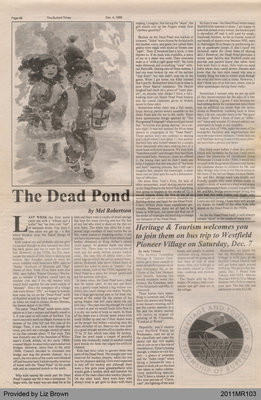