Creator
Robertson, Mel, Author
Media Type
Text
Item Type
Articles
Description
From the 1970s through the 1980s, Mel Robertson wrote many articles for the Burford Advance and Burford Times on the history of Burford Township. This clipping contains the article St. Valentine's Day: Good or Bad?. The article may not have been republished.

THIS ARTICLE is out of date and "out of touch with reality", as some people would say. It is out of date since St. Valentine's Day was several days ago and it is "out of touch with reality" since it will offend the "politically correct" bigots who are now trying to control our lives, our words and our thoughts. These people have claimed that since St. Valentine was a male Christian saint, any celebration of his day will offend non-Christians and women.

Personally, I find such a claim to be offensive. My objections are based on a couple of facts. First, for the past 15 years, I have been elected as an Honorary Vice-President of a large sports organization, many of whose members are non-Christians, and I have been privileged to attend festivals honouring their religious faith. I have never at any time heard any of my non-Christian friends say anything critical of our Christian observations. Second, I have the honour to be the husband of a woman who believes in the equality of the sexes and deplores present attempts to polarize the sexes. Thus, I cannot understand why the maleness of St. Valentine should be a point of conflict. However, recent official attempts to downplay Christmas symbols, decorations, etc., as well as the recent assault on St. Valentine's Day, leads one to believe that what authorities really fear is not public protest, but rather that some "Grand Potentate" of a two-member "coalition" that regards the droppings of Whooping Cranes as holy writ will institute a multi-million lawsuit (at public expense) that will bankrupt the government. There seems also to be a possible fear that some extreme "feminist" will suffer a traumatic experience by having to travel on "St. Paul Avenue" and will be equally litigious.

So back to good old St. Valentine's day, for better or for worse. Back to a time when kids could have fun without electronics. Back to a time when old family friends could pat a kid on the head without fearing that, 20 years later, they would be charged with "sexual assault" by people seeking "empowerment" and money. Back to a time when people were not embarrassed to show love and kindness on a day that is now condemned by our grim "politically correct" bigots.

Back to a time when "responsibilities" were considered to be as important as "rights". Back to a time when a man could smile at, or compliment, a woman or a child without being labelled as a "Dirty Old Man" (or, should I say, "a hygenically-challenged male person"?). Back to a different time in which St. Valentine's day played a small but important part.

Whcn preparations, like those of Christmas, began some time before the actual event. Parents knew that, in February, kids were beginning to suffer from mid-winter boredom and, since they did not have TV and computers to provide entertainment, they had to use their imagination and ingenuity. Thus, a few simple St. Valentine's day events were looked-forward-to things to kids who had no deep theological knowledge of St. Valentine or any political awareness of his sex.

One of the first pre-Valentine's Day activities in many families was the purchase of a Valentine-making kit. This consisted of a box containing about a dozen folding Valentines plus paper-lace hearts and stick-on labels. Children were then asked to make a list of people to whom they would send cards and then their mother, an "aunt" or the "hired girl" would sit down with them at the kitchen table and help them make and address the Valentines.

At Burford Public School, preparations began about the first week of February when the making of Valentines became the main part of our art classes. We were given considerable leeway in this work and I have an old handmade Valentine that depicts a heart-shaped balloon carrying a basketful of Valentines. The caption reads "This balloon is full of Valentines. They are for you." The card is unsigned so I do not know who sent it. I must have thought it was important for I found it in some old school papers. These Valentines were put in a big box on the teacher's desk until St. Valentine's day when they became the centre of attention and speculation.

St. Valentine's day school fun consisted of games that really had no connection with the day. One exception consisted of a game in which the "it" person leaned against the blackboard while the rest of us pinned a heart on his, or her, jacket. Then the "it" person would turn and try to guess who was the "pinner". Other games were simple singing and circling things, one of which involved kissing your partner. Boys, forthe most part, did not like "kissing games" but a few of the more precocious always tried to kiss "the little red-headed girl" whose name I can't remember. The climax of the day was the opening of the big Valentine box and the distribution of Valentines. Then there would be plates of cookies and candy and children went home wondering who had made the cards they had received.

At home, pre-school children, who in those days were kids under seven, spent the day waiting for grandparents, parents and friends to shove Valentines under the door, ring the bell and run. These visits were usually well spaced, so there were few dull moments in the day.

In some homes, parents let children put up little St. Valentine's displays in the front parlour. These consisted of special Valentines that had been received in previous years. Our special Valentine was a little silk card covered with flowers and containing a little envelope with a paper that read "A Kiss from France". This had been sent during the 1st World War by a former employee of my father who was with the Canadian Armed Forces in France.

When I was a kid, Valentine candy varied to a considerable degree. I recall red candy heart that could be bought by the handful for a few cents. Boys ate them while little girls pretended that they were lipstick. They were very popular until some spoilsport whispered that their red dye was made from squashed beetles. The other remembered Valentine candy was the little sugar medallion about the size of a looney. They had various mottos on them. Some were, of course, "Be My Valentine", while others of a more "advanced" type said "Kiss Me Quick", "Will You, Huh?", "How About It?", etc. These were perplexing to most kids and, when they asked their parents for an explanation, the offending candy was confiscated and they were told never to ask their meaning again.

In doing research for this article, I came upon a bit of information that may be interesting. In his book "A History of Post Cards" that was published in 1992, Martin Willoughby points out that, whereas Valentine cards were available in Victorian times, they were so elaborate and expensive that only well-to-do adults could afford to send them. I have a couple of such silk-fringed cards which the family of the late Glen Shaw had received many years ago. The general sending of Valentines did not begin until the penny-post and penny post cards came into use. Canada was the first non-European country to use penny post cards in June 1871, and soon Valentine post cards began to fill the mail. However, many people denounced them as they felt that Valentine wishes should not be transmitted by open post cards which anyone could read. I have a number of old Valentine postcards, but the written expressions on their backs were not of love and romance. Some say, "I will be up on the 5 o'clock train" or "I have the quinzey and am feeling poorly". Never "a kiss" or a "will you, huh?"

And so, Valentine practices changed over the years and, as they became more electronically-sophisticated, people began to feel that love and kindness could come "complete with batteries" and could be turned off or on in accordance with what TV and the Internet said was "cool". Simple unplanned attempts to entertain children were condemned as "unstructured activity" that had no place in the rearing of a

Now to entrench "The Age of Ugliness", our "politically correct" bigots are determined to kick out poor old St. Valentine. They will probably succeed, but let us hope that the aura of love and kindness that surrounded him will survive until common sense and humanity return. 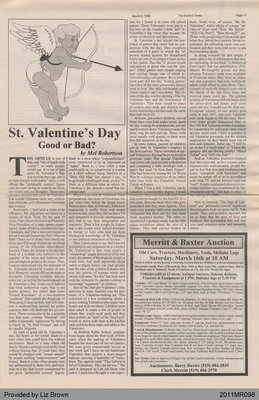