Creator
Robertson, Mel, Author
Media Type
Text
Item Type
Articles
Description
From the 1970s through the 1980s, Mel Robertson wrote many articles for the Burford Advance and Burford Times on the history of Burford Township. This clipping contains the article Songs Among the Christmas Trees. It describes Christmas Concerts in the Burford Methodist Church of the 1920s. The article may not have been republished.

Songs among the Christmas Trees

This story was published in the Burford Advance about 30 years ago. It describes a Christmas Concert in the Methodist Church of the 1920s. It is published again at the request of some of the people who took part and to honour the recent 160th anniversary of Burford

ABOUT 50 TIMES Christmas ago, the first snowfall sparked two great civic events. It brought little bundled boys into the streets rolling leaf-packed snowballs and it turned adults into theatre impresarios. It was a time when children rushing home from school at 4 o'clock found a note on the kitchen table saying that their mother was at a meeting of the Christmas Concert Committee or they saw on the back parlour table a large book titled, "Christmas Songs and Drills for Children". They knew then that, for the next couple of weeks, they would be captives of "The Christmas Concert". Christmas Concerts were one of the main social events in 1920's Burford as there was no competition from computers or TV and little from radio. When fall came, people sat around stoves, fiddled with radios and waited for skating carnivals, medicine shows and Christmas Concerts to break the monotony of the early winter. The Christmas Concert was an event that enabled frustrated directors, actors, drill sergeants and explosive experts to fulfill their dreams again. Everyone took part, or went, or criticized, in accordance with their several talents.

Yes, there it was - the Christmas Concert book published by people with all sorts of goofy hang-ups.

Quite a few were not even Christ-massey and almost all were published in the States. Some included such non-goodneighbourly songs as "I don't want to play in your yard, I don't like you anymore" and plays about dead puppies and cruel stepmothers. We looked at the book with dismay and awaited the dreaded moment when we would be summoned to practise. Then, when the adults were ready, we were ambushed and dragged through the early December dusk to the church basement. This was a rough trip for we had to endure the jeers from boys on sleighs who had pleaded broken legs to get out of the concert.

The acts did not lack variety even though some did tend to repeat themselves year after year. One guaranteed show-stopper was a marching drill which, whereas it had no Christmas significance, showed that the recent Great War was not really over. I wonder now where our instructors had received their training for we were taught to come on stomping hard in what was either a Praising Guard goose-step or a "knees up Mother Brown" attitude. Knees well up and feet stomping down hard we would crash through a series of manoeuvres, arms tight to our sides and frozen faces straight ahead. Keep in step or the kid in front of you got a knee in his backside. The crowd loved this and many of the performers did not know until 1940 that this was not the way to march.

A popular variation of the marching bit was a chorus in which we dressed like soldiers, waved Union Jacks and flourished toy guns as we sang, "I can shoot, see my big gun and don't I make the rebels run". We shouted this with great enthusiasm not realizing

that, since the Christmas book was published in the United States, the jolly old "rebels" were the American Southerners who had stopped running 60 or 70 years ago.

Another popular extravaganza was a pageant that could have been called "The Gathering of the Empire" or "I'm Alright Jack". In this we were all togged out as people of various races who prostrated themselves before someone portraying "Britannia" who stood on a cheese box swaddled in Union Jacks, bearing a hay fork to rule the waves and flanked on either side by sundry imperial figures wearing borrowed Dragoon helmets and swords. Sometimes someone with a sense of humour introduced Uncle Sam who bowed and capered before Britannia. No one found this to be incongruous for, at the time, Britannia was Santa Claus to most of the world.

Other acts had decided Freudian overtones in that adults had no hesitation in dressing a boy as a girl, giving him a doll and having him sing that j oily lilt, "My Daddy's in a coffin in the baggage car ahead". If you got stuck with a girl's part, or if you could sing, you hoped for the sudden growth of a beard or the onset of a bass voice to get you off the hook.

Sometimes acts with a Christmas theme were introduced for people who felt that no Christmas Concert should be without one. Some were marching drills with angels instead of soldiers, and some included the Manger Scene or the Flight into Egypt. These were usually distinguished from the other acts by the "explosion" which consisted of a set illumination with either magnesium ribbon or photograph flash powder. This "big turn" of the evening involved a certain amount of danger for we were never sure if the flash powder would just fizzle or go off with a bang that would send the blackened operator staggering off into the front pew. Although we were impressed with the solemnity of the occasion, as bang-oriented kids we secretly hoped for a minor upheaval.

Practice session at the church was a combination of the Gold Rush and sorting day at the Stock Yards, because no one knew if they were to be a shepherd, an angel, a Roman soldier or the donkey fleeing into Egypt. Adding to the confusion was the fact that in those days the basement at the Methodist Church was divided into Sunday School class rooms by green curtains that rolled up and down on bamboo fish poles. These seemed to challenge small boys to pull them up or down with several contending at the same moment to do the same thing. Our reward was to be "snatched bald-headed" by adults and shoved back into our place..

Finally, when we came to the church on the big night, we found that the whole place had been transformed into a wonderland. A vast platform now covered the place where the pulpit hadi stood. At either side big Christmas trees filled the auditorium with the scent of the forest. Across the front of the stage, the green curtains from the basement cut us off from the

pulsating crowd. We rushed with most of the other performers to wrestle for a peek through the agitated

Out front the transformation was even more marvellous. Everything seemed to be the red and green of Christmas. The lights shone brighter and the walls seemed to breathe in and out. The pews were full of people getting up and down for no apparent reason. Here and there friends could be spotted, uncomfortable in their Sunday suits, belching gently from their hurried suppers and chewing peppermints with bird-like motions. Everywhere heads swivelled and arms rose and fell beckoning others to nonexistent places. The air churned with excitement. High up in the gallery we could see that the front seats had been taken by the boys who had been excused from the concert because they were going to be away. There they sat like the archers at Agincourt chewing on hymn book leaves and twanging elastics. Even now soggy missiles were squashing on the heads of gesticulating parents. Angry, gobbling faces turned and threatened. Up the stairs charged the ushers. Then a crashing in the gods and down came the children like a blue serge avalanche to stand scheming by the green baize doors. Then a diversion to distract the ushers, a rush up to the gallery again, and soon the paper wads were singing down on the convulsed throng.

Backstage all was a mass of pushing, entreating, threatening and cajoling. Boys dived under the platform to make faces through the curtain. Others fought and kicked while some just sat quietly imagining that they were in Tom Swift's "Electric Copper Mine" with savages pounding overhead. Adults groped under the platform and snatched kids "bald-headed" back to the drill squad.

"Where's Billy? He has to lead this line."

"Please Miss, George just punched me in the belly button."

"Not now for pity sake."

And so the acts rolled on with the curtain opening and closing like an accordion. The flash powder boomed again, filling the church with smoke and sneezes and illuminating the Manger Scene. Then the closing chorus of "Merry, Merry Christmas and Good Night" with everyone on stage singing loud and clear.

Last of all was the arrival of Santa Claus and here I must hand it to the parents because they never made any pretence that Santa was anyone but Wilfred Eddy dressed up in a Santa suit. To prove that no one was fooled, the embattled slingers let fly at him a final volley of missiles as he "Ho Ho Hoed" up the aisle. Sometimes he suffered from falling stomach pillows and sometimes he swallowed his beard, choking and barking like a beagle. No one really cared as long as they got a bag of gumdrops or Turkish Delight.

Before we knew it we were back in the snow-piled streets. We searched the sky for what we called the "Christmas Star", hummed "Merry, Merry Christmas" once more and scooted home, content with the realization that we had taken a very positive step toward Christmas Day. 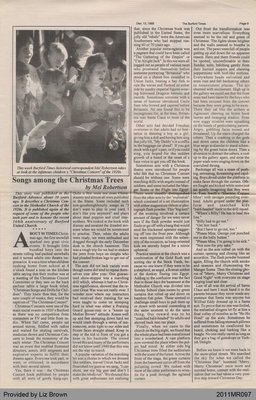