Creator
Robertson, Mel, Author
Media Type
Text
Item Type
Articles
Description
From the 1970s through the 1980s, Mel Robertson wrote many articles for the Burford Advance and Burford Times on the history of Burford Township. This clipping contains the article B. C. - Before Chips. The article may not have been republished.

The Concise Oxford Dictionary defines the abbreviation "B.C." as the term used to describe the years before the Christian era. However, it is not only a religious abbreviation for it also means "British Columbia", "Before Confederation", "Before the Conquest", etc. Consequently, it cannot be considered that I am coining an antireligious term when I use it to define the time before potato chips dominated the lives of children—a time when there was no snack food like chips, pizzas, tacos, etc, on which children could "piece" between meals.

Before describing the term "piece" as a between-meal snack, it may be interesting to note the many meanings of the word. For example, if you give someone "a piece of your mind", it means you have given them a real blast. To say that someone lives "a piece down the road" means a short distance. A story described as "a real piece" is considered to be false. "A piece of cake" was a World War 2 expression to indicate something easy. "A piece of eight" was a coin and a 1996 "piece" means a revolver of some sort. There are many other uses of the word, one of which has no connection with the caudal appendage of any animal. However, for this article, I will use the expression to describe a between-meal snack. This is a very old use of the word. One use can be found in the Scottish poem "Cuddle Doon" that was written by the poet, Alexander Anderson (1875-1909), in which a young Scottish mother has to give her children "a piece" before they will "cuddle doon" for the night.

In the days before snack food, a "piece" was usually a slice of bread with sugar on it or a bit of raw potato with salt on it. A more exotic version was a dab of raw ground beef on a cracker. Other forms of a "piece" could be permission for a child to scrape out a dish in which a cake had been made or the ultimate joy in scraping out a dish in which cake icing had been prepared. Families had their own versions of a "piece" and in mine it was "bread-n-butter-n-sugar" as we called it.

As children grew older and were "allowed out" under the supervision of an "aunt", they began to learn about natural "pieces" that were available in the fields, woods and streams where they were taken. "Aunts" were usually middle-aged unmarried friends of families who,

through the customs of the time, had been denied the opportunity to get married but who loved children. These kind women were the baby-sitters of a time when there were few labour-saving devices and no preschool kindergartens. During the summer, "aunts" took groups of children on afternoon walks to the creek or the woods. I wrote about these wonderful women in my article "Alice and the Aunts" that was published a few years ago. However, I did not mention a few things that are applicable to this article Thief of these was the way our "aunts" taught us things of nature that could be "pieced". These included wild strawberries, "black-cap" wild raspberries, elderberries, etc. They even showed us how a large clover blossom could be chewed in order to get a bit of "honey". In addition, they taught us to beware of poison ivy, stinging nettles and deadly night shade. They also showed us certain natural "jokes" such as the jewel weed or "touch-me-not" which would snap open if touched and expel its seed at us. Yet, other diversions included the making of necklaces with looped dandelion stems. The variety of natural "pieces" and diversions was almost limitless. I don't know if all this made us better environmentalists or naturalists, but I think it helped. This was all part of summer afternoon excursions and I mention it for what it may be worth. However, I suppose that in the sex-obsessed era of today, I must answer the usual questions, "Did the aunts ever try to get 'funny' with the children?" (Yes, "funny" was the word that was used for any "inappropriate touching". People hadn't learned the big multisyllable words yet.) The answer is a definite "NO". There were, of course, precocious kids who would try to get "funny" with other kids, but the "aunts" handled this sort of thing effectively without making a Supreme Court case of it. The chief remedy was a firm "NO" and the refusal to ask such kids on future hikes. An example of what could be considered "inappropriate" activity would be if a child told the "aunt" that they had to have a B.M. The "aunt" would then produce a sheaf of neatly-cut pages from an Eaton's catalogue from her handbag (Kleenex was not available in the 1920's), she would give the child some paper, point it at a convenient bush and suggest

some game for the other children to discourage curiosity and laughter. When the B.M. had been accomplished, the "aunt" would always demand a "yes" or "no" from the participant for parents of the time were very interested, for health purposes, to ensure that such physical functions were up to date. This was so important at the time that the "Trail Rangers" issued a badge for the maintenance of good KYBO, which meant "Keep Your Bowels Open". This obsession with s... in the 1920's may sound strange is 1996, but let us not forget that many now have the same obsession with the "Internet".

Eventually many children found other things that could be "pieced". One of these was a little plant with a blue flower that grew in most lawns. In these, when the petals had dropped from the flower, there was a little round thing we called "cheeses". These didn't taste like cheese but were edible and children, when in dire straights, would gather a few and chew on them. I don't remember how these things tasted, but most kids tried them at one time or other. Another thing of nature that kids used as a rather poor sort of joke to play on newcomers was the hop from hop vines. In the 1920's, there was a large hop vine growing on the fence along the north side of Andrew Street in Burford. This vine flourished for there were no houses on the adjacent lots. Then when some new kid mentioned that they were hungry, we would tell them to chew a hop. The hops, of course, were extremely bitter and we laughed at the faces the unfortunate consumer made-a poor sort of joke, of course, but on a par with the "jokes" now praised on such efflatus-provoking shows as TV s "Yuk-Yuk".

Finally in the 1920's, word went round Burford children's circles that a food called "French Fries" was available at a restaurant on Dalhousie Street in Brantford. This aroused great curiosity for such food was not available locally. I don't know why they were called "French Fries" for there was nothing particular "French" about them. Personally after motoring across France about 30 times and eating in French restaurants of all sorts, I never found this form of potato on the menu. However, in the 1920's, many things were given the word "French" possibly as a hangover from the Great War. It was applied to salad dressing, sleeves, holidays, cuffs, haircuts, perfume, novels, safes and many other things. The name later became "potato chips" and I don't think this worried the French in Quebec where they were merely "palates frites" or fried potatoes. However, there they were at a time when lots of people thought that anything with the word "French" attached to it was very stylish or rather "naughty".

The place where these wonderful "chips" were sold was a plain sort of place with oil-cloth on the tables, aproned men who prepared the food just inside the door and waiters who served it with a minimum of ceremony. Conversation among the staff tended to be loud and to the point and women who were adept at handling a tea-cup were apt to be "taken aback" and refuse to take their children there. However, mother, who never let anyone take her "aback", took my sister and me there on several occasions. Kids praised the "chips" more than the fish and attempted to bring samples home to show other kids. But since cold "chips" are tasteless, they didn't acquire many admirers and few mothers and "hired girls" were prepared to undertake the greasy mess that was needed in those days to produce them. Thus one of the bragging rights of the time was the consumption of "French Fries" and despite urging from children that "French Fries" be made available at the Burford Fair, hot dogs remained the standard food. This was not surprising for in those days there were no convenient things in which chips could be dispensed and booth operators were not prepared to set up the necessary grease pots and risk fires in order to prepare chips. However, local entrepreneurs began to feel the power of children's demands and soon tried to turn their interest in potato chips to other products. One of these was the greaseless triangular doughnut. These were made somewhere in Brantford and for a few weeks "sold like hot cakes". These confections came in plain or raisin types and were sold either singularly or in bunches of 5 or 6. Kids with a few cents bought these doughnuts and now and then would give their penniless friends a nibble. My father, Perc Sprowl and George Everett could not keep ahead of the demand and special deliveries were arranged from Brantford. However, as quickly as this craze started, it ended leaving merchants with a lot of stale doughnuts. No reason was ever given for the end of this craze, but like many other similar things before the advent of "electronic intelligence", kids kept looking for something new. However, the desire for potato chips was not a craze for soon people found many ways to sell them both in their original form and in many shapes, tastes and varieties that both children and adults could handle with ease and purchase at a variety of excellent outlets both as part of a meal and as a between-meal snack (no one would dare to call them a "piece" in our "politically correct" society.) So yell "hoorah" for the good old potato chip. I don't know if they make you fat or thin or if they benefit the environment or promote biculturalism or bilingualism, human rights, gender empowerment or "electronic intelligence". They have become a part of the lives of many people and as a between-meal snack or "piece", they sure beat "bread-n-butter-n-sugar". 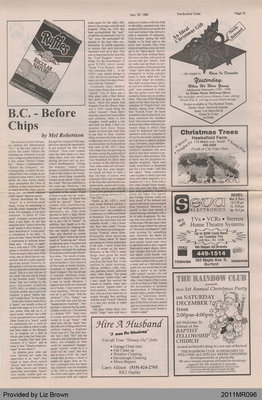