Creator
Robertson, Mel, Author
Media Type
Text
Item Type
Articles
Description
From the 1970s through the 1980s, Mel Robertson wrote many articles for the Burford Advance and Burford Times on the history of Burford Township. This clipping contains the article A Short History of the Early Beginnings of Boy Scouts in Burford area. The article may not have been republished.

During the next couple of weeks, many area youth will be registering for yet another exciting year in the local Scouting and Guiding pro-

grams. Consequently it may be interesting to recall the beginning of Scouting in Burford.

The first intimation that a Boy Scout troop was to be

established in Burford was on June 24, 1910 when the "Advance" printed a notice in its "personal" column declaring that a Scout troop would be formed and that any boy who was interested should watch the paper. This aroused great interest in the village since no one knew much about Scouting. On July 1,1910, the "Advance" editor tried to get some answers in an editorial. He wrote, "Are the Boy Scouts a type of soldier? ... All boys love to play at being soldiers ... they crave adventure ... Scouts will train the boy in discipline and obedience and make him a valuable asset when he is old enough to join the militia ... The idea is to form a strong company in the winter to get thoroughly drilled and organized with uniforms and, if possible, a fife and drum band ... then next year there can be a series of manoeuvres and occasionally a sham battle with other companies."

The impetus for the formation of a Boy Scout troop came from the Anglican church, the officers of the 25th Dragoons and a number of influential English immigrants. The military aspects of the Scouts caused much controversy. The Methodists opposed such activities and the Anglicans and Congre-gationalists supported it. However, despite the row that was raised, a committee consisting of Major W.K. Muir, C.F. Saunders and Bob Balk will was formed. H.T.

Dirl principal, was made treasurer and adjutant and George Pite, the "Advance" editor, was named Scoutmaster.

The first excursion of the Burford Scouts took place on Saturday, Sept. 17, 1910. The Scouts gathered at the Public School on Maple Ave. North. The excursion was in the form of a treasure hunt in which Cpls. Saunders and Kern started 15 minutes before the rest and hid various articles along the way. The Scouts marched to Parnell's Woods two miles north of Burford where they "cornered" the enemy and enjoyed an afternoon in the woods. Following the trip a number of new Scouts were enrolled - L. Messecar, H. Henderson, H. Ferrel, A. Telfer, K. Telfer, and R. Ten-pier.

Another outing to Parnell's Woods followed on Oct. 7 where they were met by Mr. Lewis Parnell who instructed the boys in clearing a camp site and starting a hut. The following week another hut was built and a meal was cooked in a "smoky black kettle". The march back to Burford in the twilight was enjoyed by all.

In November, plans began to be made for "A Grand Concert" in the Armoury at which the Hon. J.H. Fisher, M.P.P. agreed to act as Patron and present a Union Jack to the troop. The concert was held on the evening of Jan. 6, 1911 and about 250 people jammed into the Armoury drill hall. The Burford orchestra played and there was a tableau of camp life,

solos by Misses A. Smith and M. Metcalf, patrol Leader Fowler, Master Win Denby and instrumentals by Scout Fisher. The Rev. Mr. Tippett and the Rev. Mr. Dyson gave speeches supporting the Scouts and there was a sword drill and a maze drill by six Scouts. This was followed by the presentation of the colours and a skit, "The Magician's Hand".

The concert consolidated the position of the Scouts in Burford and from then on the "Advance" had a regular column of Scout orders covering each week's activities. These were set up like regular military orders with no "ifs", "ands" or"buts".

On Sunday, Jan. 13,1911, the Scouts held the first church parade when 18 uniformed Scouts and their Scoutmaster paraded to Holy Trinity Church where the Rev. James Horton preached on " True Manliness".

In February, the Scouts began to plan a second concert which was to include a number of girls who were interested in the Girl Guide movement. The concert was held in the Armoury on the night of April 17,1911. Once again, the hall was crowded. The feature of the concert was an operetta," The Stolen Princess". This was under the direction of Mrs. B.T. Dickson and included both boys and girls. Other items on the program were a piano duet by Mrs. Dickson and Miss Roberts, banjo solo by

Cornford of Brantford and character songs by Arthur Rutland of New Durham.

On May 13, 1911, the Scouts held their first excursion of the year to Parnell's Woods. They practiced tracking on the way out and flag signalling and camp raiding at the camp.

During the last two weeks of August, 1911, the Scouts

held a camp at Mr. Moore's flats. Every Scout attending had to have his second class certificate, bring two weeks' provisions and know how to make a regulation bed. During the camp, swimming and life saving were taught along with woodscraft and various military skills. During an open day, the Scouts served dinner to 43 friends. Another feature of the camp was a trip, in uniform, to a circus in Brantford where the Scouts were praised for "their manly appearance and behavior" .

On Oct. 13,1911, Burford Scouts completed their first year's activity with a " camp-fire" meeting at the home of the Scoutmaster. There the annual meeting was planned. Scouts mentioned were R. Temple, G. Luard, C. Saunders, C. Gorrey, H. Pite, F. Skelton, G. Fowler, H. Shellington, A. Telfer, K. Telfer, H. Henderson and L. Messecar. There may have been others whose names were not mentioned.

Scouts of today will find it strange to note the emphasis that the Scouts of 1910 placed on military work such as sword drill and stave practice, but in 1910, Burford was very military-minded. Almost every able-bodied man belonged to the Dragoons and the Armoury was the community centre. Motor cars were few and people tended to stay in the community and make their own entertainment. Apart from the initial opposition of the

community supported the Scouts. Many of the Scouts grew up to be community leaders and I am not aware that the sword drill they received in the Scouts led anyone to take the head off of any of their neighbours.

Scouting continued in Bur-ford until the early 1920s, but began to fade when the local Methodist church be-

gan to organize "Trail Ranger" and " Tuxis Boys". "Trail Rangers" were younger boys while "Tuxis Boys" were of Scout age. Most local boys belonged and the groups operated from the basement of the United Church. Sweaters and badges were worn and activity was similar to Scouting, less the sword and stave drill and other "militaristic" aspects of early Scouting. These groups met weekly in the United Church, but there were no local camps like those of the Scouts. An "Older Boys Parliament" was held in Toronto and there were yearly elections that aroused much local enthusiasm. Scott Bowerman, son of the Royal Bank manager, was elected one year and Dave Tough of the Paris Hardware family was another M.P.

Regular activities were "paper chases", some of which went as far as Paris. Dune Fisher, principal of Burford Public School, was a leader of these groups and most of Burford's businessmen were on the adult supporting committee. Very few Anglican boys belonged as former English immigrants such as C.F. Saunders, Reginald Grey and A.D.C. Luard preferred the "militaristic", "Up-the-British-Empire" attitude of the early Scout movement who felt that "all boys love to play at being soldiers."

Later, this was replaced by a Methodist/United church girls group named "Canadian Girls in Training" (C.G.l.T).

The demise of Scouting in Burford in the early 1920s may have been due to the anti-military attitude after World War I when several former Burford Scouts were killed. 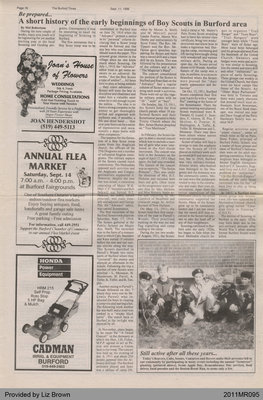