Creator
Robertson, Mel, Author
Media Type
Text
Item Type
Articles
Description
From the 1970s through the 1980s, Mel Robertson wrote many articles for the Burford Advance and Burford Times on the history of Burford Township. This clipping contains the article The Blahs of February. It describes social life in Burford in wintertime during the 1920s. The article may not have been republished.

The blahs of February

THAT THE religious reverence of Christmas and the routine revelry of New Year's is past, we find ourselves once again beginning our gentle climb through the months toward the climax of mid-summer day. Then, just as gently, we begin to follow the downward path that leads to what the ancients called the "dark days" of December and New Year's Eve. In other words, as the year rolls, along we roll with it.

It is doubtful if many regard the passage of a year in the manner described above, for electronic progress has blurred the changing of the seasons and the indoor life that computers promote make many people indifferent to what nature is doing outdoors. However, many of my readers were bored before the age of "instant electronic intelligence" and still take interest in " seasonal activities". Consequently, on many occasions people will ask me, "Why don't you write about...?" This is often of some particular seasonal activity they like to recall.

It is too late to write about January other than to quote a little verse that appeared in the 1915 issue of "Blackie's Children's Annual". To those who are not familiar with this annual book, it was an English publication that came out once a year. It contained short stories, poems, etc., that were written specially for it by many of England's most famous authors and poets. It was a favourite Christmas gift for many children. One feature was always a series of verses about each month of the year and the one for January 1915 was, "January, ice and snow Toes and finger all aglow, Skating and a snow ball fight Cozy fireside games at night. "

That was a good description of earlier Januaries. February's verse began with the line, "February snow and sleet". This just about describes the "blah" month of February which most readers who experienced it as children will recall. It was a time of snow and sleet, unpredictable weather, awkward overshoes, wet feet and boredom. It was a time when the excitement of Christmas had been forgotten and when the happiness of summer seemed to be a distant dream. This article will try to recall the ways boys tried to fill in what was really a blank space in their early lives. This will be a boy's recollection of the February "blahs" for, while most of us had sisters, the 1920s were so full of " sexual segregation", most boys didn't know or care about what local girls were doing.

As a background for any discussion of the "February blahs" of the 1920s, we must remember that the lives of children were strictly regulated by parents and teachers. Starting at home, going to bed and getting up times were strictly regulated, as were meal times. Indeed, in some homes, if a child was not at the table at the appointed time or said that he or she didn't like the meal, it was "tough luck" and the child went without. The same rule applied to the order," Eat what is put in front of you". This rule was so strict in some homes that the uneaten food was put in front of the child until it was eaten. This regulation probably went back to pioneer times when food was scarce and, while it was a severe rule, I think it helped many young men eat the indifferent food that military cooks prepared during the Second World War.

At school, discipline was handled like a military "boot camp". At Burford Public School there were two military-

style parades daily with shouted orders, "left, right", etc. In class you stood by your desk until ordered to sit down and kept your hands behind your back unless you were doing "school work". Permission had to be requested by a series of hand signals. For example, permission to go to the dirty, toilet-paper-less backhouse required one finger for No. 1, two fingers for No. 2. (I don't know what three fingers would have indicated.) Permission to "go" was sometimes denied with embarrassing results. Strapping and shaking were common punishments for the least offense. Kids' heads were frequently examined for "nits" and if the teacher found one or smelled coal oil (the standard anti-nit remedy), the kid was subjected to public ridicule. I sometimes think that Dickens' "Do-the-Boys Academy" was a pleasure resort by comparison. Most teachers were remote, severe and unfriendly and I cannot recall liking any Burford Public School teachers I had as a child.

Getting out of school at 4 o'clock was also part of the military-style routine at Burford Public School for, when the bell rang, you were ordered to put your books away, shoulder your school bags and go to the "cloak room" (no one wore cloaks) and go home directly with no loitering along the way. This was all part of "the system" and no one asked questions about its value or otherwise.

At home, boys were still part of "the system" for, since most Burford homes lacked central plumbing or furnaces, boys had certain " chores" that had to be done before supper. This involved bringing in scuttles of coal and arm loads of wood for the fires and pails of water for washing, drinking or dish early friends lived nearby, they had to do the same chores for them. Farm boys, of course, had chores involving the care of livestock, while village boys' chores involved the care of adults.

In any case, boys were involved in some sort of work until supper time at 6 o'clock. Then, after supper, everyone with a radio tuned in the 15-minute show of" Amos and Andy". After that, boys had a bit of time for themselves and in Burford they would gather around one of the big wooden light posts at the comer of King and Maple and talk about things. This kept them going until 8 o'clock when, if there was a skating rink, they could have an hour of "shinny" hockey free. After that, on Friday and Saturday nights, they could listen to the broadcast of hockey games from London provided that their parents had a radio or if they could get an "invite" to the home of a friend whose family had a radio.

Hockey broadcasts in the late 1920s were of Can-Pro league games. The Can-Pro league was a step down from the National Hockey League. It consisted of the London Tecumsehs, the Detroit Olympics, the Windsor Bulldogs, the Syracuse Stars, the Buffalo Bisons, Kitchener Dutchmen, Toronto Ravinas, Stratford and Hamilton. The broadcasting of London games was sponsored by the Supertest Petroleum Company and the broadcaster was Herb Rutherford who did London games from rink-side. He did an excellent job of creating an exciting game and we thought it was all "for real" until one night Herb said, "This game was over 20 minutes ago and this was the score. I am sorry, but we are out of time."

Many of the players from this league became stars in the NHL. These included Ebbie Goodfellow of Detroit, Herb Stuart of London, Ken Doraty of Toronto, Dolly Dolson of Stratford and others whose names I have forgotten. One particular star was a London defenceman," Speedy" Groh, whose specialty was to fire long shots that went above the lights. These would bounce in front of the opposing goalie and if he was not alert, would go into the goal.

We kids talked so much about these radio broadcasts that my Dad finally agreed to drive some of us to a game. This was before the roads were sloughed the way they are now, but our Essex sedan battled the drifts and we made it there and back without too much trouble. I never knew if Dad made this trip because he was tired of hearing us talk about the radio games, or if it was an act of kindness. He never mentioned it later. We never went to any more hockey games in the old London Arena. By contrast, the only time I went there later was prior to Easter in the 1950s when I went with several others to hear a presentation of Bach's 'St. Matthew's Passion" with James Milligan, Jon Vickers and other prominent soloists, plus a full choir and symphony orchestra. This was an outstanding musical presentation and the applause was quite different from that which greeted "Speedy" Groh's long shots.

Since there was no organized hockey for kids in the 1920s, they had to organize their own games and, if there were ponds where the arena stands on Joe Brethour's fields or on the present site

of Messecar Drive, impromptu games between the "downtown" boys and the boys from south of the tracks were played. These were mayhem on ice for the " South" boys could usually muster a couple of big " enforcers" who would dominate the games. Finally, we got our " enforcers" and the local " Stanley Cup" series ended with a monumental fist fight on the pond near Messecar Drive which our " guy" won.

Another Saturday morning event of the 1920s was the "Rabbit Drive" which the local Game Warden, Peter Porter, organized to cut down the rabbit population. Hunters would fan out in a line across the field and would shoot any rabbit they met. Sometimes boys were allowed to accompany the "Rabbit Drive", provided that they kept behind the hunters. I don't know why kids went on these drives for most of us had rabbit pets. However, I guess it was because we had little else to do. Sometimes hunters would give kids dead rabbits for a stew. These were greeted with dismay by mothers and thrown out.

Other Saturday afternoon events were walks on the creek, provided that it was frozen. I have written about these hikes before and of the bits of "nature study" we absorbed along the way.

Thus, a 1920s boy's free February time was spent. It ended at about 10 p.m. on Saturday when all "decent" people were expected to go to bed and think about the Sabbath when Sunday School (twice a Sunday) and church at night had to be observed.

Did this routine "system" make us better adults? I wouldn't be so stupid as to hazard a guess. Things weren't better or worse. They were just different. People, places and things came and went and, in this, even February had some sort of place. 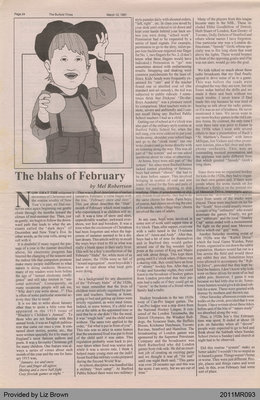