Creator
Robertson, Mel, Author
Media Type
Text
Item Type
Articles
Description
From the 1970s through the 1980s, Mel Robertson wrote many articles for the Burford Advance and Burford Times on the history of Burford Township. This clipping contains the article The Various "Winds" of March. It describes various meanings of the word "wind" in different historical periods. The article may not have been republished.

The various winds of March

"The stormy month of March is here, With wind and cloud and changing skies,

I hear the rushing of the blast That through the snowy valley flies." March has always been considered the month of wind and, if the wind is strong on March 1, people will say "In like a lion, out like a lamb". If the wind is weak, the opposite forecast will be made.

Most of us do not give much thought to the wind unless it is too cold, too hot or too strong. However, from the beginning of time people have paid considerable attention to wind. In ancient times it was considered to be the breath of good or evil spirits and some people used various rites to encourage or discourage wind. For example, Eskimos who had become alarmed by howling winds had a ritual whereby women would try to drive the wind into a fire where the men would beat it to death with clubs. Many early cultures included wind gods among the spirits they worshiped. The Greeks worshiped Aeolus, the wind god whose goodwill was needed to drive ships and aid in the growth of crops. In Christian times, adoration or fear of wind inspired many poets such as Keats in his "Ode to the West Wind" in which he describes it as "Thou breath of Heaven's being". Others, like Alfred Noyes in his poem "The Highwayman", refers to the wind as "a Torrent of Darkness among the gusty trees".

Other references to wind are many and Bartliff s "Quotations" records over 200 of them. Many of these refer to the belief that the wind spoke to

in various ways, m that a south wind brings voices of love and happiness, whereas the harsh north wind bears threats, such as "ancestral voices prophesying war" or of a woman screaming for her departed lover. I don't know if 1997 winds bear any messages. If they did, perhaps it would be that all computers were about to "go down" or that the Internet was about to publish a foolproof method of interplanetary sex.

Many local people will have recollections of wind. Personally, I can recall when my father would look out on a windy March morning and say, "Cold blows the blast across the moor" or "The north wind shall blow and we shall have snow". These were from poems he had memorized as a child.

People who attended Burford Public School in pre-busing times will recall the dismay they felt when at 4 o'clock they looked out at a blizzard howling across Maple Ave. North and realized that they had to struggle through it for a couple of miles before they could get home. Students attending B.D.H.S. in the 1930's will recall the cold windy block they had to travel on Alexander St. before they got to the old school and the weird whistling the wind made in the big west windows of the 1 st and 3rd form. Skaters and sleigh riders will remember the winds they had to face in order to skate on the Dead Pond or coast on the Bishopgate hill. However, now that the various "winds of change" have blown through the land, mechanical and electronic "change" has eliminated most of the "wind-borne" problems children had to face in the past.

The word "wind" has many meanings besides a current of air. "To get wind" of something means you have heard about it. To be "windy" means that a

person talks too much, to "have the wind up" means that a person is afraid. A "wind sock" is a device used to indicate wind direction at the airfields, "wind breaks" are lines of trees, etc that protect people from wind. "Wind breakers" are garments that protect wearers from external wind and bystanders from internal winds. There are also many references to wind sailing ships such as "the winds alee", "running down the wind", "between the wind and the weather", "up wind", "down wind", etc.

Yet another strange use of the word "wind" is to pronounce it "wynd", as in to "wind a watch". For example, a baseball pitcher "winds (wynds) up" before throwing the ball. This leads to the question, would he have "the wind up" (be afraid) as he "winds up" to pitch to a heavy hitter? To "wind up" something is to finish it, to "wind" (wynd) a horn is an ancient way to describe blowing it. A "wynd" or "wind" in Scotland means a narrow alley. Musically, in earlier days singers were taught to pronounce the word "wind" as "wynd" and, strange to say, a "windless" is a device used to wind (wynd) up a cable and a winding road may cause a horse to become "wind-broken", "wind-galled" or just plain "out of wind".

The Burford area has experienced wind storms of considerable intensity. There were two hurricanes in 1 866, one of which destroyed the derrick of a company that was "digging" for oil in the Cathcart area. Another storm in 1886 destroyed barns in the New Durham area. One in May of 1930 scared exam-writing kids at B.D.H.S. and blew down barns and trees in the Burford area. The most destructive was the storm of August 1979 that

swept a path through New Durham. I nave not been able to find the speed of these winds, but the world record is 231 mph. That was recorded at Mt. Washington in 1934. Other winds may have been stronger, but were not recorded.

Shakespeare used the word "wind" in many of his plays such as "How stands the wind for France". However, he became tangled now and then with the "wind" and "wynd" as in the line "Blow, blow thou winter wind (wynd), thou art not so unkind as friends remembered not." In this, of course, "wind" has to be pronounced "wynd" in order to rhyme with "unkind". The Bible also includes many references to "wind" such as "The wind bloweth where it listeth", etc.

Physical ability also has many wind references such as "get your second wind", "full of wind and vinegar", "run like to wind" to be "winded" (exhausted), "wind-broken", "wind-struck", "out-winded" (sometimes meaning out-argued), etc. To be called a "wind bag" or a "bladder of wind" is not a compliment.

Locally, there are a few references to wind. One of these is that an east wind brings no good to anyone and that if a storm comes up "against the wind" it will be a bad one. Another similar belief is that if a wind blows in the upper branches of trees it will bring a bad storm.

An old reference to wind was the "wuthering" which was in prominent use before central heating became common. This was the sound that wind made in stoves pipes. It was a weird sound and a child hearing it in the middle of the night could imagine almost anything. It may have been a corruption of the word "weathering". This was not

a local word for it is found in literature such as the novel "Wuthering Heights" to describe a place of desolation and sadness. It was not a friendly reference to wind.

However, the word "wind" has been used in many bestselling books, songs and film. For example, Kenneth Graham's classic of childhood, "The Wind in the Willows", still sells about 80,000 copies a year and the film "Gone With the Wind" is still considered by many to be one of the best films ever produced. There are lots of other references such as A.A. Milne's "Christopher Robin and the Windy Day". The list of joyful titles is almost endless.

An unusual use of the word "wind" can be found not far away. I refer to the tiny community west of Drumbo that is called "The Windfall". This is composed of a church, a cemetery and a few dwellings. My father's family lived in Drumbo in 1871 and operated a business there. Four of their eight sons were born in Drumbo and one, Edwin, died of diptheria in 1875 and is buried in "The Windfall" cemetery. My father, who was born in Drumbo in 1877, was named after his deceased brother. People predicted that this would ensure his early demise, but that was not the case. The Robertsons always referred to the little community as "The Windfall". This poses a couple of questions: why is "The" always included in the name and why did the community get such an| unusual name? If I have readers in Drumbo, I would be interested in knowing the answers.

Farther afield, it may be interesting to note that the river that flows through our sister community in Oxfordshire England is called the "Windrush".

Through the centuries wind has had many commercial applications such as driving ships, grinding grain and pumping water. Recently, it has become involved in the creation of electrical power and, in a number of countries, wind-operated electric generators supply power to large communities. There is little doubt that when wind-generated electricity becomes commercially viable it will replace some of the environmentally dangerous methods now used.

Probably the most unusual commercial use of "wind" took place around the turn of the century when a French Vaudeville performer found that his flatulent ability had commercial value. He became known as "The Grand Petomain" and his act of explosive and musical dexterity packed Paris theatres with several shows a day. It is written that the laughter this act created could be heard a couple of hundred yards from the theatre. Other vaudeville performers tried to emulate this money-making act in Europe and America with varying degrees of success. I will not comment on the vulgarity, or otherwise, of such a vaudeville act, but one observation seems to be appropriate: at a time when money was scarce and many men worked for almost nothing, why would they spend their hard-gained money to hear something that was common in the work-place? I guess to it boils down to "chacun a son gout", or "to each his/her own".

And so, to "wind up" this article on "wind", we may be able to take some consolation from the fact that, whereas "the wailing winds" of March may be howling through "the naked woods", they are also the winds that "wind up" the last dreary month of winter and usher us into spring. 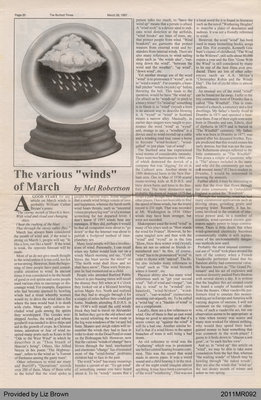