Creator
Robertson, Mel, Author
Media Type
Text
Item Type
Articles
Description
From the 1970s through the 1980s, Mel Robertson wrote many articles for the Burford Advance and Burford Times on the history of Burford Township. This clipping contains the article A Dish of Ice Cream. The article may not have been republished.

A Dish of Ice Cream

DURING THE HOT DAYS of summer, people of 1994 have had many ways to keep cool, including air conditioning, swimming pools, cooling pads, frozen food, ice water and a vast variety of non-alcholic and alcoholic coolers. This list of cooling devices is almost limitless and includes near the end (or at the end) a simple old-fashioned item called ice cream. This is still with us in many flavours, colours, shapes and sizes and is available all year round. However, back in the 1920s ice cream was treated with considerable reverence and formality. It was only available in summer and there were a number of funny "health" ideas involved in its use.

For example, it was believed to be unhealthy to add something as cold as ice cream to a hot stomach. Eating of ice cream after a hot red-meat dinner was thought to congeal the fat of the meat and cause digestive interference. Another widely-held belief was that ice cream should always be eaten with a piece of bread or a cookie that would ease the impact of the ice on the stomach.

The summer-only availability of ice cream was due to the fact that electric refrigeration was in its infancy, and the belief held by many Burford people that they did not want to be any colder than they were in winter. Thus, local ice cream was a seasonal thing and children waited, with impatience, the placement of big signs in front of certain stores announcing the arrival of the cooling confection.

However, some people got around this seasonal ban by turning out their own ice cream with ice cream snakes These consisted of a wooden bucket that was filled with chopped ice from someone's ice house liberally treated with rock salt. In the middle sat a metal container in which a mixture of cream and other ingredients were placed. Then, by means of a cranking device, the inner container was revolved until ice cream was made.

I recall one ice cream making with nausea. One winter day a friend and I asked his mother if we could make some ice cream in her freezer. She consented and, after about an hour of heavy turning, we produced over a gallon. Both of us ate a good helping. We sat back feeling satisfied, but our pleasure was soon dampened when Mrs. R. told us that, since she and her husband did not eat ice cream in w inter, we had to clean up the whole bucketful. We did so with some dismay and

I have always wondered since then how I was ever able to eat ice cream again. (Let any 11 -year-old boy try to eat over a gallon of ice cream and then try to keep it down.)

The eating of ice cream in the 1920s had a certain formality about it and. with the help of old diaries, newspapers, etc.. I will try to recreate such an event.

It is a hot summer evening in 1920s Burford and a family with a visiting uncle and aunt from "The States" have just finished a hearty supper and have adjourned to the front verandah. There they talk about the heat and try to cool themselves by swinging in a hammock and waving palm-leaf fans. When strolling friends go by, pleasant conversations take place while the children (too full of summer fun to feel hot) are playing on the lawn. Then, as twilight begins to fall, someone says. "Let's go down street and have a dish of ice cream.

(Here I must pause fora couple of observations. The term "down street" is apparently a bit of Burford slang for, from previous investigation with linguists, it would appear that this expression is unique to Burford. Other less fortunate people say "down town". The term "a dish of ice cream" was always used in the 1920s to describe a trip to an ice cream parlour for ice cream. Why this description was cannot but importance to a trip that was not made every day.)

Returning to the front verandah, the announcement about "a dish of ice cream" has galvanized everyone into action. The kids, who have been engaged in the most noisy game, have heard it and rush up. Women take off their aprons and put on big leghorn hats. Men fasten their collars and put on Christie-stiff summer hats. Why all the formality, you may ask? Well, let us remember that in the 1920s there were no shorts and halters for men and women. "Down street" etiquette demanded that women wear hats, and no man who fancied that he was a gentleman wanted to look silly in front of his visitors from "The States" by going "down street" without a hat and a collar and tie. No indeed, a trip to the ice cream parlour in the 1920s required certain standards to be observed in both dress and behaviour.

And so our little group sets out in search for its "dish of ice cream". The kids run ahead loudly proclaiming to their less-fortunate friends that they are going to have "a dish of ice cream". The adults follow at a more stately pace, pausing to converse with strolling friends about the heat and the next garden party. In due course they arrive at George Armstrong's Ice Cream Parlour.

Burford's ice cream parlour of the 1920s was located in the building of King St. West that now houses Greenwood's Meats. It was in a large room behind Armstrong's hardware store. Bay windows, which still exist, provided good light and ventilation and access was gained to the parlour through a rustic arch and wooden walk in the space now occupied by Greenwood's parking space. The parlour itself was not a fancy place for, whereas it was clean and well-painted, no one had tried to convert it into a Hollywood cafe or a Crystal Palace. There were about a half-dozen little tables, each with four twisted-iron chairs. At each place was a clean, fresh, linen table napkin and a silver spoon. Lighting was by plain electric bulbs and at the west end was a nickel-silver soda fountain with one white-globed electric light. This was supposed to dispense fizzy sodas, but did not have the equipment to do so as few people asked for that belch-inducing beverage.

On entering the ice cream parlour, our party is greeted immediately by the genial host, George Armstrong, who shows everyone to a table and brings everyone a glass of water. Orders for either vanilla or maple ice cream are taken and. while George gets them ready, our party relaxes by chatting with other people who have come to cool off. Then, in due course. Mr. Armstrong comes from behind the soda fountain with a tray of "dishes of ice cream". The "dish" is about the size of a saucer (and may be one). On each is ball of ice cream about twice the size of a golf ball. The kids set to it at once, but some of the ladies, who feel that ice cream should be eaten with a slice of bread or a cookie, ask Mr. Armstrong for such a nibble and he obliges them without delay. Then, while our party indulges itself in the usual shudders about the coldness of the ice cream, Mr. Armstrong draws up a chair and increases the merriment w its his humourous poetry about local "characters". There is no hurry to eat the ice cream, for this is a "night out" for local people and the visitors from "The States" call the place "Delmonicos" and Mr. Armstrong whistles a tune pretending that he is the orchestra people would find at a swanky ice cream parlour in "the Big City". Then, after a time, our party folds their table napkins and the usual joshing about who will pay the $2 bill.

Finally, our party is off for home, suitably cooled and ready for another session on the front verandah before bedtime. The children, still running, are collecting their memories of the evening in order to impress their friends the next day. And so the story of a 1920s

"dish of ice cream" is completed.

Having "a dish of ice cream" was not the only way to eat this confection in the 1920s, for even then ice cream cones were common. The only difference from 1994 was the financial and social situation. Financially, few kids of the 1920s had money to buy ice cream cones and. socially, no kid felt put-upon if well dressed gentlemen fought with them over lost dimes on the morning after Burford Fair.

An ice cream cone cost five cents and, if a visiting aunt or uncle gave them such a coin, kids wanted to be sure they got their money's worth. Kids got to know the places where the people selling the product gave them a full scoop, and where, by making a half-scoop, they got more air-holes than ice cream. Thus, they flocked to the place were the kind woman who scooped the ice cream gave them a big full scoop which was patted down and given a bit more on top. Such largess sometimes inspired kids to bite the end out of the cone and try to suck the ice cream down through it.

And so the few cooling aids of the 1920s, such as the "dish of ice cream", the glass of lemonade or raspberry vinegar, and "Dr. Adam's Health Aid & Cooling Mixture", have long since disappeared into the heat mists of many summer afternoons. Methods of cooling have progressed to heights uni-magined in the 1920s.

Most of the early methods of keeping cool that I have tried to describe in this article have been forgotten, leaving (perhaps) only-thoughts of pleasant conversation with friends over "a dish of ice cream" at George Armstrong's Ice Cream Parlour. 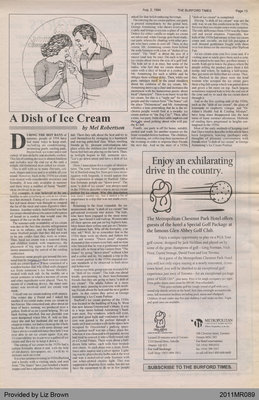