Creator
Robertson, Mel, Author
Media Type
Text
Item Type
Articles
Description
From the 1970s through the 1980s, Mel Robertson wrote many articles for the Burford Advance and Burford Times on the history of Burford Township. This clipping contains the article Local Senior Citizen Suffers Amputation. The article may not have been republished.

Last week, during the work required to move Hydro poles, one of Burford's most respected senior citizens suffered a couple of major amputations. This was a long-time resident of the village with roots deep in our local history and who was beloved by several generations of children. This citizen did not have the name of Fred or Joe, but suffered under the scientific name of "Aesculus Hippocastunum". (How's that fora soap-opera name?) Its shorter name was "horsechestnut". I refer to the tree in front of the Burford Medical Clinic on Maple Avenue North.

To be more specific, the Readers Digest Book of American Wild Life lists the tree as growing to 60 feet in height and having white flowers which produce two

or three shiny nuts in spiked husks. Its habitat is listed as streets and parks in southern Ontario and the northern States.

Its nuts are not edible. However, for many years, the horsechestnut has had a strange fascination for children of all ages and, every fall, as soon as there is a frost to drop the nuts, groups of children have gathered under chestnut trees to collect them. Often messy skirmishes take place and any child who has collected more than one has felt like a millionaire. The tree on Maple Avenue North has been no exception, and every year it has been the centre of chestnut scrambling.

Since horsechestnuts are not edible, why have they generated so much interest? This seems to be due to a couple of reasons.

Some people like to hold and rub them in order to feel the softness of the shell and to enjoy the glowing colour that finger-rubbing produces. Such people say that this makes them feel good for reasons they cannot explain, and nuts are put away and preserved for contemplation on stormy dull winter days.

Boys have made throwing toys out of the nuts by boring a hole in them and attaching a piece of string. This, when twirled around the head, becomes a missile or an adjunct to competitions. Throwing contests are held and the nut that travels the farthest becomes an object for fatuous bragging.

Another game involving horsechestnuts is "conkers". This is an English boys' game in which the "conker", or nut, is attached to a short bit of cord. Then, when a child met another with such

a "conker", each would take turns swinging at the other's nut hoping to break it in the process. Swings were limited to three and there were other rigorous childish rules. Various methods were used to harden a "conker", and the one which was able to break all others was held in great esteem.

Kids have always felt that the meat of a chestnut was poisonous. I don't know if that is the case. However, I have never heard of a child eating a chestnut and suffering piles or conniption fits for doing so. No indeed, for there was a certain awe about a chestnut and a reverence that would make any attempt at eating such a nut akin to eating a Bible.

No one, to my knowledge, has ever tried to explain the mystery surrounding a horsechestnut. Have they been regarded as good luck charms or a "comfort blanket" sort of thing that people turned to when in distress? Are they items of folklore that have influenced our course of history? Or are they just cute, little, easily-carried "pets" that replace puppies or kittens that cannot be put in the pocket?

Maybe it is the big eye-like spot on a softly-glowing horsechestnut that gives the impression that the holder is in the presence of a good spirit of some sort. Whatever the cause for admiration, it must be a good one for I have never seen a child (or adult) squash a horsechestnut under foot.

So, shout "hurrah" for the horsechestnut tree all you "nutty" admirers and heave a sigh that the old friend on Maple Avenue North has survived to entertain another generation of nut-scramblers. 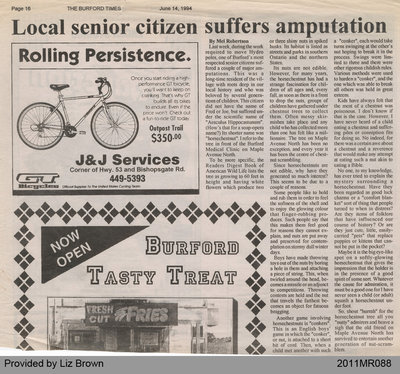