Creator
Robertson, Mel, Author
Media Type
Text
Item Type
Articles
Description
From the 1970s through the 1980s, Mel Robertson wrote many articles for the Burford Advance and Burford Times on the history of Burford Township. This clipping contains the article Burford's Big Eclipse describing the solar eclipse of 1925. The article may not have been republished.

The recent eclipse of the sun was riot Burford's first experience with this phenomena, for we had a spectacular one in 1925.

Our 1925 eclipse caused considerable apprehension for, at that time, there was no instant-news. TV, fax machines, computers, etc.. to keep us informed and electronically intelligent. Radio was in its infancy, so we had to depend on the rather sketchy and uninformed information given by newspapers.

No one seemed to know exactly what to expect and speculation ran wild. We were told that the eclipse might be accompanied by an earthquake, a tornado, unusual celestial revelations and a funny sound akin to an astronomic type of flatulence. Some religious zealots even anticipated the end of the world and got ready for it.

The day was a cold and sunny Saturday. The skies were clear and there was considerable snow on the ground. This is in direct contrast to recent newspaper reports that the day was cloudy and that people could barely see the eclipse.

Buiford prepared itself for the event. Some people climbed into the Armoury tower in order to be a few feet closer to the eclipse. Others smoked-up bits of glass over lamp chimneys as we had been warned not to look at the sun bare-eyed and few people had dark glasses. Others crossed their fingers and hoped that they would not be carried away by the passing shadow.

The time of the eclipse was 9:30 a.m. and many children (including me) gathered with their mothers on the cinder path on Maple Avenue, just north of the old public school. This was an ideal spot for the fields to the west were completely open and it was possible to see over the snow-covered fields for over a mile. Thus the approaching shadow would be seen quite clearly. No one brought telescopes or field glasses - we were too unsophisticated for that. However, most of us carried sticks or snowballs in case we had to defend the village from the unknown. In addition, most of us held on tightly to our mothers' hands lest, as a last resort, we would need her to tell the solar invaders to get lost. We stood there, with apprehension, wondering which way we would go if the world came to an end.

At 9:30 a.m. someone yelled. "There it comes!" and sure enough, off to the west, we could see the swiftly-approaching shadow. No one said anything, but our hair rose in our tassel caps. On came the shadow travelling "like sixty". (To travel "like sixty" was super-sonic in 1925 for only the Burford bootleggers travelled faster than that.) It rushed over us. turning day into night, and we thought we heard a funny noise. Nothing happened and turning around we could see the shadow retreating over the eastern fields. Someone said, "Whew" and someone else said. "Gosh" and was reprimanded by his mother for uttering such a word. Most kids felt that they had been short-changed since no earth-shaking cataclysm had taken place. "Let's go home", said someone, and we did that.

At home, everyone got old scribblers and pencils so that we could record our experiences. Most of us retreated to a big snow-house we had built behind what is now the Township Office. There we sat writing things until our pants became soaked with the melting snow and we had to go home for dinner.

I don't know what happened to the things I wrote, but I think the scribbler was used to start the kitchen stove on a less remarkable day. 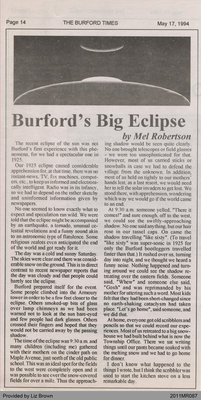