Creator
Robertson, Mel, Author
Media Type
Text
Item Type
Articles
Description
From the 1970s through the 1980s, Mel Robertson wrote many articles for the Burford Advance and Burford Times on the history of Burford Township. This clipping contains the article Unparliamentary Language. The article may not have been republished.

Since such expulsions have taken place previously in Houses of Parliament, it may be interesting to examine the term "unparliamentary language" in its application beyond the Houses of Parliament and its use in daily life. The term is clearly defined in parliament, but not so clearly in ordinary usage where its scope ranges from the worst forms of blasphemy to ordinary household expressions of disgust. This article will be limited to the milder expressions which change with the generations.

A major change in the use of "unparliamentary language" came to my attention a few months ago when I was pulling away from a parking place in front of the local Post Office. Suddenly a group of teenagers, whom I did not know, pushed one of the members of their group into the path of my car. I slammed on the brakes and foolishly blew my horn. This seemed to be a normal response to a very dangerous act. I didn't expect any thanks. However, what I did get was an outburst of excremental language from the pushee, which led me to believe that, through some process unknown to medical science, the contents of the speaker's large intestine had been transferred to his brain.

It can be argued that, since I am an older person, I am easily shocked by the way people talk today. However, I spent 25 years in the Armed Forces at a time when you could give, or

receive, an order without calling a multinational, multi-cultural, multimedia conference, without appealing to the Supreme Court, and when you weren't expected to say "please", "thank you", or "merci". Indeed there were many times when instant obedience was needed to prevent death or injury. Consequently some officers and NCO's developed a vocabulary of "unparliamentary expressions" that they used to startle people into instant obedience when such expressions as "please" and "Would you mind" would not solve the emergency. I was not such a person, but I am aware that sometimes under stress or in emergencies some people used them. Consequently, I am not unfamiliar with "unparliamentary language". My only surprise in the Post Office encounter was to note the source of the obscenity.

The uses of unparliamentary language probably go back to the earliest times. Did Noah look out on the thirty-fifth day and say "It looks like we will get some more rain", or did he say "Come on you sons of Belial, go for another load of gofer wood." (Note: My Biblical dictionary says that the word "Belial" was not only a reference to the devil, but also a reference to sloth and indolence. It also states that a type of cedar called "gofer wood" was used to construct the Ark.)

Other similar situations could be imagined from reading ancient literature and reference books. Indeed the "Dictionary of the Vulgar Tongue" that was published in 1811 contains many examples of "buckish slang", "university wit" and "pickpocket eloquence" that can be defined as "unparliamentary". Locally, laws gave great breadth of definition when it came to the use of unacceptable language. For example, unacceptable language was defined as anything

that "would entice a blush" in the hearer or anything that was considered to be "unbecoming". Such definitions must have created considerable difficulty, for in the early days many women were apt to blush at the sight of a pair of men's woolen drawers drying on a clothes line or to consider that many things were "unbecoming". Constables never hesitated to charge men for the use of language they used themselves and toll-keepers could do the same if a driver swore at a balky horse. Furthermore, the painting of certain words on fences was a serious offense, even though they were heard regularly on the street.

I will not go into that further, but before proceeding with minor forms of "unparliamentary language" it might be interesting to note that one of its earliest uses involved insults to the devil. These included such phrases as "By the old Harry", "By the old bald-headed", "By the old Billy", "Billy be hanged", "By the old nicker-nacker" and so on. These expressions were frequently accompanied by ancient gestures which were considered to be insults to the devil. These gestures were based on the ancient belief that the devil was ashamed of his unattractive back-side (the spiked tail). The best known of these gestures is "thumbing the nose" which means "Kiss my back-side". This is a very ancient gesture that appears in many old cartoons, books, and illustrations. This was supposed to indicate that the person to whom the gesture was given was the devil. Similar gestures include flipping the hand under the chin or flexing the fore arm. Maybe the modern gesture of the "one-finger salute" has the same implication.

When I was a kid, great efforts were made by families, schools, churches, cartoonists, and newspapers to steer children away from unparliamentary expressions. The use of "gosh" or "darn" in some schools or homes could result in physical punishment. Cartoonists tried to help by having their "manly" boys use such expressions as "criminately", "Oh Min", "You know me Al", "Gee Whillak-ers" or "That's all I wanted to know". Later on someone tried to popularize the expression "So'syeroldman" but this was frowned upon by many parents as being disrespectful to fathers.

Women were also expected to confine their language to "ladylike" expressions of disgust that were the sole property of women. One of these was the use of the word "grief in expressions such as "good grief or "great grief. It is hard to understand how the word "grief could be used as an almost unparliamentary expression since its meaning is great sorrow. However my grandmother Woodin, who hated profanity of any kind, could curl the paper on the walls by saying "Great grief in winter!", which was the very worst thing she could think of to use.

Other similar uses of meaningless words as unparliamentary language have come to my attention in my own family environment. For example, my father-in-law, William Dalziel, a First World War aviator, used the expression "Great Caesar's Ghost", with devastating effects. My father, also a non-swearer, could cow the opposition with the strength of his favourite expression, "Pshaw". My wife Shirley can stop an argument with the emphatic use of the word "honestly". Other families, I am sure, have similar expressions which they use when under stress win moments of disgust. I will not try to list all of them, but they include such innocuous words as "goodness", "mercy", and "pity" which when uttered at the right time and with the right emphasis could make "Texas Mule-Skinners" quail in horror or admiration. A good illustration of this is a story told about Mark Twain, the American humorist, who as a former river boat pilot, knew and used a variety of unparliamentary language. His wife did not like this, and one day after he had fired a string of oath^s she repeated them to him. Twain's reply was, "Yes, my dear, you have the words but you don't have the music." So maybe it is not the words, but the music.

However, before leaving the subject of sexually-segregated words there is one word that I have never heard a man use and that is "Rats". This was a favourite expression used by women when I was a kid. Although Charlie Brown in the Cartoon strip "Peanuts" uses this expression, I never heard a man employ it. Today, of course, we live in a sexually equal society where anyone who watches some American TV channels after midnight will note that women are just as adept with the four lettered words as men.

In going over the list of "unparliamentary" expressions used in the past it is amazing to note that, in a church and family dominated society, so many phrases had religious content such as "Holy Moses", "Holy Smoke", "Jumping Jehosephat", "Holy Mackerel", "Holy Moley", "Jumping Derision", and "Judas Priest". The realm of semi-religious unparliamentary language was also sexually segregated, for only women seem to have used such expressions as "Merciful Heavens", "For Heaven's sake", "Heavens to Betsy", "Land of Goshen", or "Land of Mercy", expressions that were fairly meaningless depending on the emphasis put on them and the circumstances under which they were used. Such expressions were in common use and did not brand the users as religious transgressors or religious crackpots. However, it may be worth noting that when I was stationed in Quebec in the 1940s it was an offense to use certain church oriented words as "sacrifice" and "tabernacle" as part of an unparliamentary expression. I don't know if this law still exists, but I was amazed at the time to hear of the severity the Courts applied against transgressors.

And so, unparliamentary language has changed with the generations and to trace the background and meaning of these expressions would consume more time than I am prepared to spend. The only suggestion I have to offer to anyone who wishes to keep abreast of the times and to renew their vocabulary of such expressions - try blowing your horn the next time some 12 year old kid jumps in front of your car. 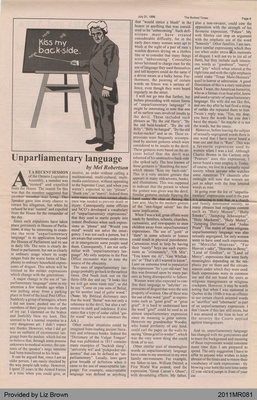