Creator
Robertson, Mel, Author
Media Type
Text
Item Type
Articles
Description
From the 1970s through the 1980s, Mel Robertson wrote many articles for the Burford Advance and Burford Times on the history of Burford Township. This clipping contains the article Rewards and Punishments describing students' life in Burford School in the 1920s. The article may not have been republished.

A RECENT NEWS ITEM indicates that an Ontario school boy is suing his area School Board, his principal and others for "conspiring" to expel him from school. The reason for his expulsion (as given in the news report) was that he was alleged to have cursed and struck a teaching assistant. Since the merits of this case have not been considered by the courts it cannot be discussed or judged. However, the fact that such a lawsuit is possible may make it interesting to compare present school disciplinary problems with those of the 1920s when I was in the educational stream.

A short time ago I wrote articles for the "Times" and the "Expositor" describing my school days and on re-reading them I feel that I may have given the impression that life at Burford Public School and Burford High School in the 1920s was all punishment and no rewards. I will not deny t

prevailed in both institutions, there were also a few rewards.

Since most of the rewards I will describe were not of a higher academic nature I will start at Burford Public School. To begin with, one of the most sought-after rewards was permission to ring the school bell. The bell was a very important part of a child's life in the 1920s for in that pre-electronic age much of our daily activity was governed by its ringing. This stern arbiter of our school days hung in a belfry at the west end of the main hall. The rope that controlled its ominous voice dangled in a little window-enclosed cubicle with two inner and two outer doors. This was an area of considerable significance and reverence for from it came the ten daily bell ringings that controlled our lives. The first of these was at 8:45 a.m. and was called "The First Bell" (why not?). This told us that we had 15 minutes to get to school. At 9:00 "The Last Bell" (how ominous) told us that if we were not at school we would be listed as "Late" and our parents would be informed. At 10 the bell told (or should I say tolled?) us that we had a 15 minute "Recess" in which to play or do anything we had to do. The 10:15 bell told us that "Recess" was over and the 12 o'clock jangle gave us permission to go home for dinner or eat it in the dirty hall. In the afternoon the bell rang at 1:15,1:30, 3:00,3:15 and 4:00. The grand total was ten.

Ringing the bell was, of course, one of the principal's duties but since it was such a nitpicking task he always bestowed the honour on a student. Thus when the big clock at the back of the room showed that a bell-ringing was approaching hands would go up all over the place as eager students asked for the honour of ringing the bell and thus giving them the brief privilege of controlling the lives of their friends. Sometimes, in a show of magnanimity, the principal would confer this honour on two children. This was the ultimate honour but it also involved a serious hazard for if the bell-ringers, in their enthusiasm, "turned the bell over" they would be punished. The term "turned the bell over" may not be familiar to some people in this non-bell-ringing age but it meant that if the bell rope was tugged too vigorously the bell would

revolve on its trunnions and create a raucous sound. Since such a sound was considered to be beneath the dignity of the educational process bell ringers who caused it were apt to get a severe "jawing" or even a whack from the ever-present strap.

Another sought-after honour was that of cleaning the blackboards and the blackboard brushes. This messy job was one of the caretaker's responsibilities but our wily custodian, Sam, had managed to persuade everyone that honour, prestige and "empowerment" were involved. As a result, kids contended with each other to be given the privilege of collecting the brushes and cleaning them by pounding them against the outer walls. This created lung-destroying clouds of dust which did little to destroy the bragging-rights the job conferred on the practitioner.

In class another messy and sought-after reward was to be given the task of filling the ink-wells. These were little hinged-top containers that were set into the top of each desk. In pre-ball-point days they held the ink into which we dipped our pen nibs during "writing" class. Incidentally, "writing" classes were not designed to make us writers of cheap fiction but rather to instruct us in the art of writing legible letters, resumes, etc. a task now taken over by electronic devices. These little ink wells had to be filled regularly. Bulk ink was kept in a large bottle at the teacher's desk and kids felt that they had received the accolade if they were given the honour of being Chief Ink Dispenser. Some kids brought their own ink bottles and kept them in their desks. This practice calls to mind an occasion when a teacher found that one boy had succeeded in urinating in his empty ink bottle and leaving it in his desk. A great ruckus arose, and looking back I don't know if I should recall this incident with disgust or with curiosity as to how the boy managed this feat of dexterity without our ever-vigilant teacher noting it.

Yet another sought-after honour was that of distributing and collecting books used in class. I don't know if this practice prevails today but in the 1920s a considerable number of publicly-supplied books were kept in classroom cupboards. These were brought out and distributed when required. Children felt that they were "one up" on their friends if they were chosen to distribute and collect the books. No risks were involved in this task as the teachers were only too pleased to have someone do a thing that was expected of them.

Some kids were always in the forefront in requesting these simple privileges and rewards. I say "reward" advisedly as kids never got a word of thanks from our remote teachers. The rest of us always wondered if these eager volunteers were really vying for the position of "Teacher's Pet". I don't remember the names of these "brown nosers" but I have often wondered if in later life they became community and national leaders. I don't know if this sort of favouritism exists in 1990s Public Schools. I doubt it for from conversations with teachers and news reports, it would appear that any form of favouritism or special kindness on the part of public school teachers today would probably result in an accusation of "sexual assault" against the teacher who tried to use it.

So those were the "rewards" of 1920s Bur-ford Public School: simple but remembered for one reason or other. However, before I leave the subject of 1920s Burford School education it may be of interest to note the rules and regulations that made the seeking of rewards worthwhile and made us older people better or worse citizens than we are. Among the forbidden things were talking in class, laughing in class without permission, standing up unless told to do so, leaving one's desk without permission, passing notes, breaking wind, chewing gum or eating things, not putting your hands behind your back when told to do so, not closing your eyes during daily prayers and not singing the National Anthem. Among these forbidden things were two that still puzzle me. One was "Being Idle" and the other was "Telling Tales Out of School." Being "Idle" encompassed almost anything the teacher didn't like and I suspect that it arose from the saying that "The Devil finds tasks for Idle Hands to do." Consequently children were punished for "being idle" or even worse "day dreaming." "Telling Tales Out of School" was another catch-all for which a child could be sent to the cloak room or made to stand at the front of the class. Capital punishment in the form of the strap varied in accordance with the humour of the teacher concerned but was obligatory for "Answering back" and throwing snow-balls. I suppose that the purpose of all this discipline was to teach children to be polite and considerate. How strange when in 1990 a person can be reviled and spat upon for merely holding a door open for a parcel-laden woman (It happened to me).

Rewards and punishments at Burford High School in the 1920s were few, as children were expected to be "broken at the wheel" before they got there. However there were a couple that would be laughable today. One was against boys standing in front of the local hotel during noon hour or going up in the Barnea Hall. Boys caught doing this were given a stern warning and a note was sent to their parents. In class, punishments were reduced to staying after four for either 30 minutes or an hour, being put out of a class or being expelled. One teacher had a nasty form of punishment. She was very proud of the subject she taught and if a student dropped it she would order them to stand and then would berate them in the most insulting terms for the whole 20 minutes of the class. She bragged later that she never stopped her ranting until she made girls cry.

So that was it: but before I close my last comment on local schools I wish to allay the suspicion that I make these comments without having experienced any of the punishments. All right! I was strapped once at Burford Public School for letting the folding part of my desk slam down. I was expelled once at Burford High School for trying to pass a note to a friend. The teacher ordered me to give her the note but I got ornery and refused. I was expelled. However the expulsion did not last long. I have often wondered if the brevity of the penalty was due to second thoughts on the reason for giving it, or the fact that my father had been the only member of the Burford High School Board who had opposed reductions in teachers' salaries.

So those will be my last recollections of my school days. I haven't made them to praise the "Good Old Days" for they were not particularly good. I suppose I made them because many kids feel that the age in which they are living is the "Golden Age" or the best of times and that anything that is past, or is coming, cannot compete with it. We thought so in the 1920s and I am sure that 1990s kids feel the same way. I don't accept the saying that "The more things change the more they are the same". The best we can hope for is that by remembering what has happened we will have the wit to see that we don't repeat our errors. 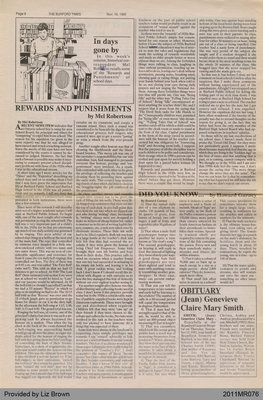