Creator
Robertson, Mel, Author
Media Type
Text
Item Type
Articles
Description
From the 1970s through the 1980s, Mel Robertson wrote many articles for the Burford Advance and Burford Times on the history of Burford Township. This clipping contains the article The First Snowfall. It describes how children celebrated the first snowfall in Burford in the 1920s. The article may not have been republished.

This new print by Harley artist Janice Tanton, called "Home For The Holidays", captures the magic of the winter season. In the following article, Burford Times correspondent Mel Robertson reminisces about that special time known as "The First Snowfall".

Why was the first snowfall each year so special? It was a guaranteed annual event but to many children of the $1920s it was a special event. Was it special because it marked the transition between summer and winter? Was it a sign that autumn was over and children could look down the road (so to speak) to the mystie festivities of Christmas and New Years? It was not that we did not like the fall with its landmark events of the School Fair, Burford Fair and Halloween, but maybe the first snowfall was like the curtain coming down at the end of an act in a play at the Barnea Hall. It marked a time when coaster wagons were put away, stoves were put up, flannelette sheets were put on beds and long underwear was donned. Fall was a sort of holding time when it was too cold to swim, or sit on the grass, too dark outside after supper to play on the lawn and too early to get loaded down with overcoats, toques and boots. It was also too early for the folks to light up the big back-parlour stove with the mica doors through which the fire sparkled. It was too early to curl up in the big corner chair while Grandpa Woodin wove his stories about "Paw and Maw, Fatty and Skinny, Sis and the Baby' or to hear Mother read "Treasure Island" or "Peter Pan". The first snowfall marked a time when a child could do all these winter things without feeling silly.

Does the first snowfall mean anything to children in 1992? I doubt it for a number of good reasons. First, most houses have central heating and thus, when winter comes, there is no reason to make drastic changes in clothing and in-house life style. Second, the wide use of Nintendo and computers and the popularity of organized

sports and after-school training classes make changes in the weather of little importance to children. Motor cars have made getting to arenas, swimming pools, gyms and other place of amusement and instruction a quick and simple thing. Such facilities were not available to children in the 1920s. Few families had motor cars and those who did put them away for the winter. Few mothers could drive cars and if they could they would not put up with the long and arduous task of getting them started in winter. Children were left to their own devices and their own imagination of what was important. I do not make these comparisons with any desire to say that things were any better (or any worse). They were, and are, us different. However, 1920s probably knew more about the environment than kids of the 1990s because they had to live closer to it by the lack of conveniences. They didn't know all the big "environmental" words but they knew what they saw and felt without being told in multi-syllable words what some unqualified environmental "expert" said was "politically correct". In other words, kids of the 1920s acquired their unsophisticated knowledge without electronic devices to assist them. I don't know if this was good or bad but most of us could count to ten without electronic assistance and could spell correctly most of the simple words we used.

So why was the arrival of the first snowflake in the 1920s such an important thing to children? While we awaited its arrival with pleasure we also placed some restrictions on when it should arrive. We could not predict its arrival for there were no radio or TV weather reports to tell us hourly if palm trees were nourishing in Calgary or if 10 feet of snow had fallen on Intercourse, Saskatchewan. Weather predictions were primitive to say the least, for they ranged from people who said that you could smell an approaching snowstorm to those who swore that snow could be predicted by a change in their vital bodily functions. Since kids lacked such intelligence and arrived "without batteries" we had to wrestle with out hopes and fears about the first snowfall. We wanted the snow alright, but we were afraid it would come too soon and thus interfere with our two late-fall festivities - Burford Fair and Halloween. These events, which are of minor importance in the 1990s, were, for the lack of other activities, major events for the 1920s child. Snow of Fair Day would have been a disaster for it would have slowed us down as we struggled with other kids to collect the pamphlets on "Green Manure" or "Dr. Numbum's Electric Corset" that the inevitable airplane showered on us. It would have created problems for the guy who tried himself into a little box and the "Quick Feel" psychopaths who tried to guess our weight. Snow on the day after the Fair would have hampered kids in their search for loose change that had been dropped at the Fair and would have given a distinct advantage to the well-dressed Burford gentlemen with the silver-headed canes, in rooting through the snow-covered trash that covered the Fair grounds. Snow on Halloween night was an equal disaster, for the kind people who asked children in for homemade fudge did not want a lot of dirty snow tracked into their parlours. Snow at Halloween also speeded up the deterioration of the cardboard false faces we wore and discouraged the holding of in-house parties by parents who did not want to contend with getting a lot of costumed kids in and out of snow-covered coats and boots. Thus we had a sort of Love-Hate feeling about the first snowfall.

With a snow-free Burford Fair and Halloween behind them, Burford kids of the 1920s still placed restrictions on when would be the proper time for the first snowfall.

We felt that since we had so many restrictions imposed on us it was quite in order for us to impose restrictions on the first snowfall. This was stupid, of course, and looking back it was almost as stupid as the restrictions "politically correct" people in the 1990s impose on everyone but themselves. To kids of the 1920s the only "politically correct" time for the first snow to fall was at noon or "noon hour" as we called it. A night time first snow was completely out of the question, for it imposed too many restrictions on kids. Most serious of these was the fact that if we were seen to be throwing snowballs on the way to school or (heaven forbid) in the school yard, this crime was good for at least a half dozen good whacks of the strap from our sadistic principal. Second, if we arrived at school with wet feet from scuffling through the snow we were screamed at and "jawed at" by our class teacher and then "plunked down" hard in our seats so that "we would never forget it." This, plus that fact that we had missed the slow magic of the first (lakes, ruled out night snowfalls. We couldn't stop them, of course, but Mother Goose or whoever controlled the snow, would pay attention to our childish requests.

So why was a first snowfall at "noon hour" we could watch the slow descent of each flake and wonder where it came from and why. It was also a good excuse to miss school for children became so fascinated with the first snowfall that they begged to stay home from school to see what would develop. Mothers who understood this childish fascination would agree and would take the time to find some way whereby their children could benefit from the afternoon away from school. Very young children were told that the snow was Mother Goose shaking her blankets before putting them on the beds for winter and that the flakes were goose feathers. Later children would wonder about any house where geese were allowed on the beds or in the clothes closets. Other more fanciful, or sanitary, tales were made up, but to most children the little white things that were coming down so slowly were only snowflakes. Some children even ran about with their tongues out hoping to capture a snowflake for whatever it might be good for.

So there it was, the long awaited, much talked about phenomenon - the first snowfall. What did kids do with it? Well, they tried to pull sleighs in it but found that the leaves under the snow clogged the runners. They tried to make snowmen but found that there wasn't enough to make one. They tried to make snowballs but fund they were too full of old wet leaves to make a good missile. The tried to make "angels" in the snow by lying down and waving their arms but all they got was a wet seat. They tried to build snow houses or forts but the snow was so wet and leaf-filled that they fell down. They tried many things before they went indoors and waited for a real snowfall. What did they learn (but forget) every year? Well, they learned that the first snowfall was like many things of life - the anticipation was much better than the experience. However, since the brief years of childhood were not years of great introspection we took off our dirty wet clothes and looked forward with great anticipation for the first snowfall of the next year.

I was six, I am sorry I squashed the cream puff in your face. I wish I had eaten it. 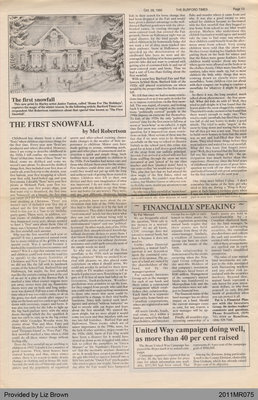