Creator
Robertson, Mel, Author
Media Type
Text
Item Type
Articles
Description
From the 1970s through the 1980s, Mel Robertson wrote many articles for the Burford Advance and Burford Times on the history of Burford Township. This clipping contains the article The Songs of Childhood. The article may not have been republished.

THE SONGS OF CHILDHOOD

By Mel Robertson AT ABOUT A QUARTER TO ELEVEN

every Sunday in the 1920s, Frank Lewis, the Superintendent of Burford Methodist Sunday School, gave a signal to the pianist. Then, to the tune of "Onward Christian Soldiers", we children of the primary grade formed a line and with much knee-high foot-stomping marched to the little room at the west end of the basement. There we met our teacher, Jane Harley, who divided us into groups of girls and boys, told us to sit down and asked us what hymn we wanted to sing. The choices were always the same: "Jesus Loves Me", "Canalittle" and "Jesus Bidjus" (explanation later). When one of these was chosen the old reed organ whee/ed into action and we sang until we were told to stop and keep quiet. Then boys and girls were segregated by a green curtain and we received separate Sunday School lessons.

Thus many Burford children were introduced to singing, and this seems to be as good a place as any to start discussing the songs of childhood.

Sunday School singing was not, of course, the first singing many Burford children heard, for in some homes music played a big part in the rearing of children. My home was one such place. One of my first recollection of childhood is of hearing my grandfather Woodin sing "mouth music" songs as he bounced me on his knee-crossed foot. The term "mouth music" may not be familiar to some people but it was an ancient way of singing meaningless words in a rhythmic fashion to accompany dancing when musical instruments were not available. My grandfather's favourite "mouth music" song was one beginning with "Keemo-Kymo-Darow-Wye, McKee-McKay-Come-a-Rum-Dum-Tiddle-Diddle". Another began with "Dumpy Overseas with a Tee-Eye-Too" and yet another was "Paw's little gel-gel, Paw's little boy". I don't recall many other "words" but "Keemo-Kymo" has several verses ending with "Sing-Song-City-Won't-You-Ky-Me-Oh" (whatever that meant). Another nonsense ending was "Johnny won't you fiddle on my banjo". Older readers will probably recall other similar nonsense songs.

Of more sensible tone were "sleep" or "toothache" songs that were sung to put a child to sleep or to help him or her forget the pain of a toothache. One such song was "The Ninety and Nine", a hymn about a lost sheep. This was a quiet, counting sort of song that was very effective in calming upset children. A more lively one was "Bobby Shafto's gone to sea. Silver buckles on his knee".

At this time, when children did not need to be calmed or put to sleep, there were songs to make them laugh. One of these was "Three little pigs lay with their tails turned up". This was a comic song in which the singer had to imitate pigs grunting, and concluded with the unexplainable words "Susannah's a funny old man". I recall this song with considerable humour, for two of my "summer uncles" who sang it to me were normally very remote and dignified; one

was a Marshall-Field executive and the other a university professor, and to hear them do the "oinking" bit was a thing to remember. This song, like "Ta-Ra-Boom-de-Aye" and "Rig-A-Jig-Jig and "Away We Go", could almost be classified as "mouth music" songs.

As children grew older, "mouth music" songs were replaced by an entirely different type of song whose origin and popularity in Burford homes I cannot understand. These were American Civil War songs, like "Marching Through Georgia", "Tramp, Tramp, Tramp the Boys are Marching", "Hurrah for the Red, White and Blue" and "Polly Wolly Doodle". In my family no one had been connected with the American Civil War and the only Civil War veteran in Bur-ford was Helen Everett's grandfather. However^ many small children sang these songs, probably because they had a rhythm that made them laugh and bounce.

The next step in the musical education of a 1920s Burford child was their graduation from home to Sunday School where they became familiar with the hymns I mentioned in the first paragraph of this article. Some of these hymns received strange titles, due to the fact that the children who sang them could not read and thus pronounced the titles phonetically. For example, when we yelled "Canalittle" we meant "Can a little child like me, help the Father fittingly?" Similarly "Jesus Bidjus" was our interpretation of "Jesus bids us shine, with a pure clear light". Since none of us heard the word "bid" used at home we thought that a "bidjus" was something that shone "like a little candle burning in the night". Such a thought was comforting to pre-electricity children who could not dispel darkness by flipping a switch. A dark room could be frightening to a small child but the thought of "Jesus Bidjus" shining in the dark was very reassuring. Religious purists and head-shrinkers may laugh at me if they like, but this is one of my recollections of childhood that always conveys a happy thought.

Similar misinterpretation was given to some of the hymns we heard adults sing in Sunday School. One of these was "Beulah Land" and the other referred to "ransomed souls". This latter hymn was particularly confusing to children for we never heard the words "ransom" or "ransomed" used at home. However, we did hear people say "I think that butter has gone rancid", and that was the only word close to "ransomed" that we heard. Thus we wondered why "rancid souls" were mentioned in this hymn. Did someone somewhere say "I thing that soul has gone rancid". We may laugh at this innocent childish misinterpretation, but maybe a person whose soul had "gone rancid" needed whatever help the church could give. The hymn "Beulah Land" was equally confusing. Its meaning confused me then and it confuses me now. My excellent Bible dictionary says that the word "Beulah" means "married". My Oxford Concise Dictionary defines it as a noun meaning "a non-denominational chapel". The book of Isaiah mentions it as "a marriage of the

land". We did not know any of these interpretations in the 1920s but when the hymn was sung we turned to the several little girls in our group who were named "Beulah" and regarded them with wonder.

I do not know how familiar 1990s children are with the Bible, but in the 1920s almost every home had a copy of "Hurlburt's Stories of the Bible" and these were read to us every Sunday afternoon. Thus we became familiar with Jesus' life on earth, and when we sang "Jesus Loves Me" or "Jesus Bidjus" we felt happy and confident. I do not feel the least bit irreverent in mentioning these childish misinterpretations so much later in life. I realize that if we had had computers we would have recognized our errors, but would we have remembered them with such quiet pleasure so many years later?

With Sunday School came Sunday School Christmas concerts with their library of songs. Of these I remember "Away in a Manger" and "Merry, Merry Christmas and^ Good-night," which was always the closing chorus. In between were songs such as "Dolly, Dolly, Dolly, Shut your Pretty eyes. Santa Claus will be here with a big surprise". This was really a girls' chorus, but now and then, if a girl got sick or had cold feet, a boy would be handed a doll and thrust into the chorus line. Those who suffered this indignity were given the cold shoulder by all the other boys. Another Christmas Concert song was "We Wish You a Merry Christmas". This song is memorable, for the person who taught it to us insisted that we emphasize the word "Wish". This resulted in the word coming out as a rather watery "Whish", and when 20 kids sang this loud and clear people must have thought that the second Flood was imminent. However, it was popular with audiences as long as they did not sit too close to the production line. "Away in a Manger" had a .cozy feeling for many Burford children even though the hymn was intended to describe the lowliness of the Holy Birth. Our cozy feeling came from the fact that in the 1920s there was a TB scare and many Burford fathers had bought "tested" cows and installed them in the little barns that stood behind ' every house. Parts of a child's day was to go to the barn and converse wish (he resident cow. Having a cow was like having a big pet and her presence in our stable put reality into the carol.

At about age six most Burford children started school and became familiar with another group of songs. Most of these were patriotic songs such as "We'll Never Let the Old Flag Fall", "The Maple Leaf and "Canada Dear Canada, Men of the North are We" (no feminists need apply), and of course "God Save the King". These were

chosen at random by the school principal as songs to accompany the Biblical reading we had at the all-school morning parades. For some reason, our current National Anthem "Oh Canada" was seldom sung. Since many of these songs emphasized British Empire jingoism, they were offset each week by a half hour of instruction by the Rev. George Kelly of Burford Congregational church in "Tonic-Sol-Fa", or part singing. We had a little book of innocuous songs for this instruction but, apart from the song "Catch the Sunshine", I can't remember a single one.

School days in the 1920s always included a school Christmas Concert in the Barnea Hall. This concert was non-religious and its songs were taken from books of "Songs and Drills for Children". Many of these songs were composed by people with nasty social quirks. One such was that toe-tapper "I don't want to play in your yard, I don't like you any more". In this one a little girl insisted that another little girl "be nice" to her "or else". Other songs were about little boys growing up to be soldiers and killing each other or any nonconformists they happened to meet. Such songs would not be acceptable today but in the 1920s parents applauded songs full of sexual and racial animosity, probably because they couldn't hear what we were singing.

In between the songs of Sunday School and the songs of day school were the songs of play and I have written about many such songs in a previous article. To these can be added "The Old Grey Mare", "Pop Goes the Weasel", "Ding Dong Bell" and a song about washing yours socks whose title I have forgotten. These were the sort of songs that were thrust into the spontaneous games our ever-loving and ever-imaginative mothers and "aunts" devised for our summer afternoon pleasure.

So when did children graduate from.the songs of childhood to the more sophisticated songs of the day? I think it was they began to notice "sheet music" on the piano at home and on the pianos of their friends. In the days before Radio and TV, "popular songs" were made popular by what was called "sheet music". This was a folded sheet of paper with a fancy cover that contained not only the words and music of a song but also signs indicating the chords that should be played on the ukulele - that four stringed horror every teenage "Harold Teen" dude of the time felt he had to strum. Some of these popular songs I remember were "I'm Forever Blowing Bubbles", "Barney Google", "It Ain't Gonna Rain No More" and "Constantinople". When children moved into this realm of music they left the world of childhood songs, and I will stop right there. 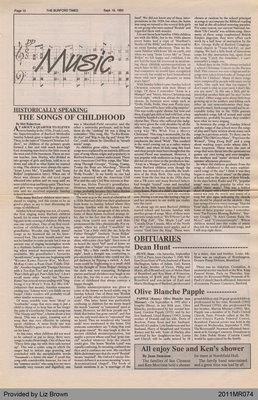