Creator
Robertson, Mel, Author
Media Type
Text
Item Type
Articles
Description
From the 1970s through the 1980s, Mel Robertson wrote many articles for the Burford Advance and Burford Times on the history of Burford Township. This clipping contains the article The In-Between Season. It describes social life in Burford in the 1920s. The article may not have been republished.

When I wrote my article, "The End of Childhood" last May, I thought I had emptied the bag of childhood memories that had supplied information for over 50 articles in the past 30 years. However, recently some of my readers who had shared the same era with me suggested some "Do you remember" items they would like to read about. One of these was that period in life of a 1920s child that could be described as an "in-between" season. By this, I mean that brief period of days or weeks that existed when the seasons changed. There were several of these seasons--winter-spring, spring-summer, summer-autumn, autumn-winter. Each had a number of rituals and activities that children followed each year. However, this article will deal with only one such season-winter-spring.

Why was this "in-between season" more noteworthy . than the others and more difficult to handle? The other seasonal changes were handled with either sadness or joy, but the winter-spring change had neither, and I think if the word "blah" had been invented, children

would have used it. It was a time when children had forgotten the thrill of catching the first snowflake on their tongue, the excitement of the Christmas concert, the magic of Christmas eve, the joy of Christmas day, and the mystery of New Year's Eve. Gone was the novelty of the Christmas toys, the first slide on the ice and the first snowball fight. Now, snow banks had become too full of cigar butts, dog poop and other things to make them sites for snow houses. The weather was either too hot or too cold, the ground was too muddy, mittens got too wet too soon, and the getting in and out of winter coats and boots had become an unpleasant task. Since there were no indoor facilities such as rinks and gyms and few organized activities for children, they were left to exercise their imagination during the few days or weeks of the "in-between" winter-spring season.

One annual diversion that mothers practiced when children complained was a competition to see who could find the first crocus in Bur-ford. This was a rare flower

in the village during the 1920s, and as I can recall, there was only one street-side bed where crocuses grew. This was a house in King Street West that is now No. 160. This house was owned by Mr. and Mrs. Errtie Spicer. The front lawn had a neat picket fence and in the center of the lawn was a flower bed in which many crocuses grew. As a child, I was familiar with this house for then Jack Spicer was, and is, my oldest friend. Therefore, when children complained of nothing to do, (continued on pg. 13)

mothers would say "Why don't you go up to Spicers to see if the crocuses are up." This inspired a rush along King Street with all striving to be first and none last. Speculation was rife with everyone giving opinions, prognostications and boasts that "my dad can run faster than yours." We approached the house with speed and fervour with each child hoping to say, "I saw it first." Then, leaning on the picket fence, we either enjoyed the flowers or looked for signs of their emergence...Looking back, I have often wondered how the Spicers put up with groups of little kids who came to see the crocuses bloom. However, they were kindly people who would sometimes come out to say friendly things to us. In return, I cannot recall any occasion when a child went inside the fence or picked a flower. This little event may sound boring and "uncool" in 1995. Maybe it was, but it must be remembered that we did not have access to computers, TV, Internet or the Information Highway, so we had to "make do" with what we had.

As we grew older, we were allowed to put in the time by going on "pussy willow trips". This meant going to the second drain west of Bur-ford where willow bushes grew in the swamp. The only problem with these trips was that the looming of the pussy willows usually coincided with the spring freshet which backed up creek water into the swamp. Thus, in order to get pussy willows, we had to reach as far as we could over the muddy water. Usually a good bunch could be picked in this way, but on occasion, someone would reach too far and get a wet foot. Then the "Don't get your feet wet" panic would seize us as we were sure from all the warnings we had received that anyone who got their feet wet would be turned instantly into a pillar of ice. With this in mind, there would be a rush home with everyone picking up sticks to fight off any dog who tried to take advantage of our "pillar of ice."

A more passive "in-between season" activity was to sit on the little wooden bridge that spanned the first drain west of Burford. The drain was much deeper in those days and large pike would come up from the creek seeking food. Consequently, we endured the boredom of watching the water flow in the hope that we would see a 3-foot pike glide under our feet. Sometimes men in rubber boots would jump into the drain to catch the pike with their bare hands. We longed for the day when we could emulate them, but when that day came, we weren't interested.

Probably the most talked about and most disappointing event of the "in-between season" was the "breakup" of the Grand River. This, according to word that was passed through the "play-ground telegraph", was a spectacular event that could be classed with the end of the world or the parting of the Red Sea. We got the impression that when the ice of the Grand River "broke up", it did so with a tremendous explosion which sent icebergs as big as the "Titanic" roaring over the dam below the Lome Bridge. We hoped that someone would take us to view this spectacle and one year someone did. We rushed toward the old iron Lome Bridge hoping that our courage would not falter when the "break-up" took place and that our kidneys would not fail us. We waited and waited, but nothing happened. There was the mighty river ready to "break up". There was the dam ready to handle the icebergs. Finally, we took our fingers out of our ears, but all we heard was a quiet rush of water and the off-tune singing of a drunk from a nearby hotel. Finally, the father who had brought us said, "Let's go home" and we piled into his Studebaker wondering if the anticipated excitement and the subsequent disappointment had taken us any closer to spring? The playing of marbles indoors was another "in-between season" activity that children practiced in the 1920s, and since the sidewalks were too wet and dirty to sit on, this took place in the basement of Burford Public School. This was a large place with two coal-burning furnaces, a coal bin and a wood shed for the small classroom stoves. The floor was coal-dust-covered concrete and there were four huge granite pillars that held up the floor. It was not the best place for a game of marbles as all participants came away with coal-dust encrusted trousers. There was also some danger involved for in the 1920s, playing marbles "for keeps" was regarded by the principal and many parents as an immoral game. The term "for keeps" meant that kids kept the marbles they won off other kids. This was thought to lead boys away from the "path of righteousness" and into "dens of iniquity". Consequently, our stern principal kept a close eye on these games of marbles and would report to parents any boy whose little muslin marble bag seemed to be too heavy. This may seem strange for the "in your face" kids of 1995, but in the 1920s, kids were ruled with an iron hand at school, church and home. While most season-hastening things of the 1920s were boy-oriented, there was one that was almost exclusively related to girls and that was skipping, both singly or doubly skipping with two girls holding the rope. Boys, who did not intend to become boxers, shunned skipping, but now and then, some smart-ass boy who was trying to "show off' would run into a double-skipping game only to become tangled in the rope and make a fool of himself. Outdoor skipping was a sure sign of spring in the 1920s and girls tried to hasten the season with indoor skipping. This was practiced at Burford Public School on days when girls had exclusive use of the hall. There were also a few homes with room to swing a skipping rope. My home was one of these, hi the 1920s, we lived in the apartment over my father's store (the brick part of Lee's corner market). This was a large apartment with a long hall down the middle off which our double parlours and bedrooms opened. It was big enough for double skipping, and my sister Emi-lie and her friends would try to skip there. The hall was an ideal place for the game, but the sound of jumping up and down on the floor annoyed customers in the store and thus the games were shortlived. The same hall was used for roller-skating with the same results.

And so the few weeks of the "in-between season" came and went. I imagine that in this age of electronic amusements, indoor facilities and organized activities, our little attempts to hasten spring may sound pretty dull. Maybe they were, but since many of our activities involved watching the changing of the seasons, we did acquire some appreciation for nature and our environment. In addition, since some of the season-hastening games involved spelling and counting, we got some skill in these things. It is also possible that we learned some self-reliance for having nothing, we tried to make the most of it. I do not suggest that the kids of the 1920s were any better than 1995 kids of the same age. We were only different. Then we could only imagine things, but now kids can put imagination into fact. For example, in the 1920s when a kid was given "one alongside the ear" by a stern school teacher, Sunday School teacher or parent, they could only imagine how they could retaliate. Now they can "surf" the "Internet" and learn how to make a pipe bomb that would quickly even the score.

Does the messy "in-between season" of winter-spring mean anything to kids in 1995? I don't think so and I hope not. However, please don't laugh at my lack of present-day values when I tell you that when I brushed the leaves off our first clump of snow-drops, I said a quiet "hello". 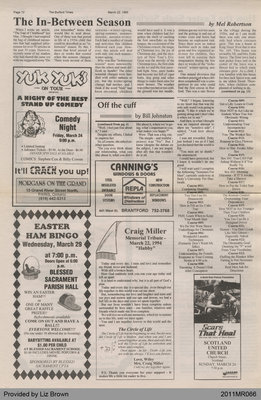