Creator
Robertson, Mel, Author
Media Type
Text
Item Type
Articles
Description
From the 1970s through the 1980s, Mel Robertson wrote many articles for the Burford Advance and Burford Times on the history of Burford Township. This clipping contains the article "Dinner on the Grass". The article may not have been republished.

DINNER ON THE GRASS

BY THE TIME this article comes to print, the summer of 1994 will be only a memory in the minds of many people - a memory of trips taken, places seen and experiences experienced (How's that again?). People will recall trips by motor car, boat, plane, bicycle, motorcycle, and shoe leather. The relating of these odysseys will produce enough hot air to inflate the exotic hot-air balloons in which some people have traveled. People who did not explore the ends of the earth will recall at-home, out-of-door parties such as barbecues, cook-outs, brunches, patio parties, and even possibly that almost forgotten event known as the one-family picnic.

Several years ago m my article "Picnics and Excursions", I wrote about the large excursions and picnics that people organized in the late 1800s and early 1900s. This included the gigantic excursions involving 1,500 to 2,000 Burford people to Niagara Falls and Guelph, as well as the well-organized picnics that local churches, lodges, choirs and other groups held in and around the village. However, I did not go very deeply into the one or two-family picnics that graced the local scene almost every summer day in the early years. In this article, I will try with the aid of diaries, letters, newspapers and photos to recall these simple, but pleasurable events.

The word "picnic" is derived from the 18th century French word "piquenique" meaning "a pleasure party including a meal, out-of-doors". Picnics, of course, go back to the earliest time with the most notable being that described in the 14th Chapter of St. Matthew's gospel where over 5,000 sat on the grass to eat a meal of "loaves and fishes". Picnics have been described in books, film and drama and have been portrayed in works of art. Of the latter category, one of the most controversial picnics (fan be seen in the French Impressionist painting titled, "Dejeuner sous les Arbres" (dinner under the trees). In this, two dignified, three-piece-suited, celluloid-collared, gentlemen are having a picnic with a completely naked (but also dignified) woman. In this picture, neither of the pompous men or the equally pompous woman, is showing any interest in the other, the food, or the park-like setting. People viewing this perplexing picture wonder if the complete indifference shown by all concerned meant either that picnics of this sort were commonplace in France at the time, or if it indicated that French gentlemen were more interested in eating a good sandwich than having a conversation with a naked woman. However, without any reflection on

Burford men and women of the time, I will try to describe the small family picnic of 80 years ago.

First, let us consider the setting. Most family picnics took place at well-known sites along Whiteman's creek north of Burford, such as "Charles Flats", "Stuarts Flats", etc. These were all on private property, but it would appear that property owners did not expect prior notice or place many restrictions on the use of their land. The only expectation was that picnickers would close gates "behind them" and clean up before they left. The shutting of gates was not a problem for in earlier times there was a great tradition of closing doors and gates "behindy era". People who did not do so were shamed by shouts of "Were you born in a barn?" The "cleanliness" was thought to be next to "Godliness". The owners of local picnic spots seemed to enjoy these summer intrusions and local papers of the time reported farmers who provided pony rides for children or who dropped their farm work to take part in picnic fun.

One of the most popular picnic spots was a place called "The Island" which existed on the present site of the Lions' Park north of Burford. This was a real island that was formed by the fact that the creek had two channels plus a mill race, under Maple Avenue North. These were crossed by tree bridges; two of which were eliminated often township Council had the present artificial channel dug. Since the "Island" was in all probability no more beautiful than other places along the creek, why was it chosen for so many family picnics? The only reason that I can think of was the popularity of such island-oriented books as "Treasure Island", "The Coral Island" and "Robinson Crusoe" which may have given people (particularly children) a sort of romantic attachment to having a picnic on an island. This lure may have outshone the inconvenience involved in wading the creek to get to "the Island". This picnic spot had disappeared long before I was a child, but I can recall the pleasure with which my mother and others, described summer picnics there.

Two of the main differences between modern picnics and those of the early 1900s were clothing and "convenience" items. As to clothing there were no shorts, halters, casual shirts, etc. that promoted relaxation. Men wore the same Sunday-go-to-meeting suits (maybe minus the vest) that they wore to church and many men and women thought it "unseemly" for men to take off their coats and roll their sleeves in the presence of ladies. Indeed, any man who dared to roll up his pant legs was considered by ladies to be either "cool" or "rude". Ladies, for their part, wore high-necked "waists" and voluminous skirts, which, when they sat on the grass, covered even the toes of their "sensible" shoes. (NO "Dejeuner sous les Arbres" stuff for Bur-ford). This attire may sound extremely unsuitable for picnics in 1994, but old photos I

have still reveal the happiness of the moment.

From a "convenience" point of view, there were no pre-packed, pre-cooked foods, no barbecue machines, no refrigeration, no picnic dishes, and no handy carrying baskets. Everything was prepared at home and carried to the picnic in baskets or pails. The only out-of-doors food preparation was the making of tea in an old kettle that sat on a little camp fire. Other beverages such as lemonade and raspberry vinegar were brought in granite pails and put in the creek to keep cool. For the lack of paper table cloths, linen ones were brought and spread on the grass (beware of hidden cow-pats). This on-the-grass table was set with table napkins, salt and pepper shakers, spoons, and if it was the right time of summer, a bouquet of flowers was put in the middle. If elderly people were present, kitchen chairs were provided for them.

The menu for a summer picnic in the early days was similar to the summer menu people found at home. Few women gave any thought to food that was particularly picnic-oriented and their minds were not taken up with such food fads as sun-dried tomatoes, salsa and things environmentalists said people had to eat in order to save the three-toed fig plucker in Puget Sound. Lacking these advantages, women prepared food they knew people liked in summer. Thus, there was potato salad, coleslaw, deviled eggs, scallions and celery. Meat was seldom served, but salmon sandwiches were the alternative. As to relishes, there were no pressure cans of mustard, but jars of pickled crabapples, pickled pears, pickled beets and nine-day cucumber pickles (what - no catsup?). Desserts could include Brown Betty puddings, tapioca pudding, rhubarb or elderberry pie and homemade cookies. As appetizers, there were humbugs or peppermints.

Transportation was usually by "horse and rig". These conveyances were parked under nearby trees where the patient horses had their own picnic of creek water and hay.

Carrying the food and chairs, plus other site preparation, was always considered to be "men's work", but when this was accomplished, the "woman of the house" yelled, "everybody get out from under my feet" to the men and children. This cleared the site for food preparation by the women and older girls. The men then sneaked off to some secluded place where they could take off their coats and try to snare one of the big pike that infested the creek. Children were led to an open place by a visiting "aunt" and kept amused with imaginative games and stories. Then, when the meal was set up, someone banged on a pail, blew a bugle or yelled, "Hurrah!" (a popular "let's go" expression of the time). When everyone had assembled, the whole group stood round the food while "Be Present at our Table, Lord" was sung. If the local clergyman was present, a longer spoken "grace" might be said. Then a rather formal meal followed, with much "please pass the ...." politeness. Children who had been taught to be "seen and not heard" stuffed their faces and wondered how Robinson Crusoe managed without a glass of raspberry vinegar and a nine-day pickle.

After the meal, the "get out from under my feet" order was given again. Then men went some place to have a smoke while children ran about looking for a bush behind which they could "go out". The women then rinsed dishes in the creek and got things ready for the trip home. When this was accomplished, there was a sing-song around the little fire until approaching darkness caused a final "clean-up" and the trip home.

Family picnics in the early 1900s received considerable newspaper coverage. For instance, I was surprised and amused to notice in the "Burford Advance" of June 22, 1912 that "the families of John Robertson and C.N. Woodin had a nice picnic at the flats last week". Since neither of my grandfathers would have sent such news to the paper, it is presumed that Andrew Messecar, the local editor, who was an ardent fisherman, had come upon this picnic while in pursuit of a fish. Probably he had been invited to have a glass of lemonade. Other families received similar publicity for Andrew Messecar spent many summer afternoons fishing at the creek.

Looking back at the family picnics of the early 1900s, feminists of 1994 are bound to criticize the amount of work women had to do in organizing them and preparing food. This is a valid criticism, but it must be remembered that, at the time, work was divided into "roles" called "men's work" and "women's work" and both men and women were expected to confine their activities to these "roles". (Woe betide any man or woman who dared to "role jump".) Few professions, other than nursing or teaching, welcomed women and few women urged other women to change the system. There were, of course, many strong-minded local women such as my mother, Mrs. Joe Brethour, Maude Mclntyre and Dr. Edith Lewis, who believed in equality of opportunity for women, but few aspired to be brain surgeons, corporate lawyers or international tycoons. That was the way it was - like it or not. However, let's not forget that many women of the time enjoyed the "empowerment" they had as "boss of the household" which diaries show they extended to be "boss of the picnic".

And so, the 1900s family picnic has, like "The Island", vanished from the scene - motor cars and "convenience" things have seen to that. Most people are now too busy, or too constipated with electronic devices, to spend an idle hour eating potato salad on the grass. Indeed, such a "bite" of food has been replaced by the "byte" of a computer. Time races on, but which "bite" or "byte" will be remembered longest? 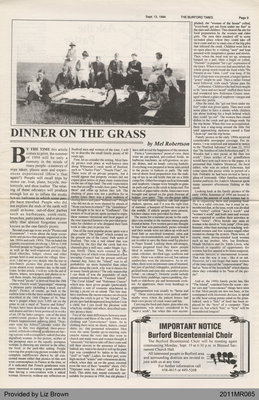