Creator
Robertson, Mel, Author
Media Type
Text
Item Type
Articles
Description
From the 1970s through the 1980s, Mel Robertson wrote many articles for the Burford Advance and Burford Times on the history of Burford Township. This clipping contains the article "In the Gloaming" describing twilight activities in Burford in the 1920s. The article may not have been republished.

Derryharney, west of Cathcart, is one of Burford Township's most significant historical homes, and no doubt was the site of many evenings relaxing in the "Gloaming". The house was owned by Adam Farrington in 1847. It is presently the home of Marion Sheridan.

By Mel Robertson THE WORD "GLOAMING" is

seldom heard anymore. It refers to "twilight", another seldom heard word. Both refer to the time of day Longfellow described as "between the dark and the daylight". Gloaming may have come from the word "glow" which describes the sunset or it may be Scottish in its origin. In any case it is that brief moment in the day when it is too dark to read and too bright to turn on a light. In earlier times, people used this brief moment to rest their eyes and their spirits.

In the 1920s the "gloaming" received considerable attention due to the simple fact that, since most houses lacked electricity, people could not create instant light by pushing a switch. Creating light could be a laborious thing depending on the availability of lamps and matches, the condition of the lamps, the trimming of the wicks and the cleanliness of the lamp chimneys. Thus people did not rush to dispel the darkness as we do today but sat for a few moments in the twilight discussing the news of the day, telling stories to children or singing familiar songs.

There were many songs about twilight or the "gloaming" in the early days. Most were highly sentimental such as "In the Gloaming, Oh My Darling", "When Day is Done and Twilight Falls", "Just a Song at Twilight" etc. Of these, "In the Gloaming, Oh My Darling" was alleged to have been written by a young governess who had fallen in love with her widowed employer but felt that she should leave rather than let him know she loved him. According to the story, when the man found the poem he sought out the young lady, married her and lived happily ever afterward. Of a less sentimental nature was Harry Lauder's comic song "Roamin' in the Gloaming, on the Bonnie Banks of Clyde". This song was very popular in the 1920s Burford as it was part of the repertory of Charlie Douglas, an accomplished Scottish singer and comedian. Most of these songs had simple harmonies

and since many people were adept at part-singing, harmonizing was a pleasant way to spend the gloaming.

Sitting in the gloaming was popular both in winter and in summer. In winter, people stirred up the big parlour stove until the flames sparkled through the mica panes. Rocking chairs were warmed and people chatted or sang while children were made ready for bed.

This was a time for bedtime stories to be "made up" and I can recall many such stories that were rendered more realistic by the sound of wind "wuthering" in the chimney. The word "wuthering" is another seldom heard word. It is not in the dictionary but may be a corruption of the word "weathering". It is best described as the weird sound of a winter wind rushing briefly down a chimney. Older readers will know what I am referring to. Children loved the gloaming, for not only were they entertained with new stories, but also they were warmed up before they were put to bed in an unheated bedroom.

In summer, the lack of motor cars made people stay within easy walking distance from home and entertain themselves by visiting friends and neighbours. Thus it was common for mothers to take their children for a short walk and sit on a friend's porch during the brief hour of twilight. There they would chat and drink lemonade while the children played on the lawn. Sometimes these visits were extended into the darkness and this was a magic time for young children, particularly if there happened to be fireflies, heat lightening or a breeze. Older people will recall such moments and will remember how things were so quiet in thf village that you could hear screen doors slam as people went in and out with tea or lemonade.

How did women of the 1920s find time to sit in the twilight? Of course, some did and some didn't. However, among the families of my childhood many of very modest means employed "hired girls". This didn't imply affluence, for my family employed a "hired girl" even though my father's pay from his father was about $6 a week. We had, of course, a free house and all our food and clothing from the business but there was not much cash floating around. Other families of my acquaintance were in the

same boat. "Hired Girls" were easy to obtain in the 1920s when apart from nursing, teaching and store clerking, there were few opportunities for female employment. Most "hired girls" came from large farm families where they had little privacy and no pocket money. Thus they were only too pleased to offer their services to village families in exchange for a few dollars a month, a private room and a life of their own. Such was the case of our "hired girl"* who came from a large family where she had to sleep with two sisters. She came to us and asked for $4 a month. In addition, she received a large, clean, well-furnished, warm room plus all her clothing and food and time off whenever she wanted it. In exchange she did the cleaning, cooking and baby-sitting. She went on all family outings, took part in all family festivities and was regarded as a member of the family.

Our "hired girl", who was named Ruby, came from a well known Burford area farm family. She was never regarded as an employee but rather as a grown member of the family. I never thought of her in any other way and can still remember her kindness. After my sister and I became manageable, Ruby moved to B.C. where she married a fine farmer, raised a family and sent Mother Christmas presents or cards as long as she lived.

You may ask, of course, why mother did not do all the household thing herself, but she, like many other young Burford mothers of the time, was involved in many community and church organizations. Moreover, she was studying singing and piano at the Brantford Conservatory and was much on call as an accompanist and soloist for church services and garden parties.

Having a "hired girl" in the 1920s would not be regarded as "politically correct" in the 1990s, but it was similar to the "day care" women use today except that children were "baby sat" in the home and not sent to someone else's place. Few people thought that having such domestic help made them socially superior to people who didn't have it. In the 1920s it all boiled down to the fact that women who had grown children let them do the "washing up" after supper. Those who didn't had "hired girls" who cleaned things away before taking on their own evening activities.

Twilight visits may have been an adult version of the "Playground Telegraph" in that news was spread. Gossip was included, of course, but in this a certain rural censorship prevailed. This meant that the question "Who said that?" or the admonition "Remember where that came from" was applied. Most people had a pretty good idea of whose information was authentic and who exaggerated, or based stories on lies or malice.

Young people of the 1920s had their own twilight activities. Since few young men had a car, or access to one, courtship was pedestrian and on a summer's evening a young man took his fiancee for a "walk" on one or another of Burford's "walks". One of

these was along Maple Ave. north to the creek. This was on the west side of the road along an avenue of trees Herm Stuart had planted. This "walk" was so well regarded that the "Advance" editor published frequent news items urging people to keep it in good shape. The other "walk" was at the west end of King Street. There the sidewalk ended in front of George Fritzley's and a wide cinder path extended along the north side of the road as far as the drain. There a wooden bridge crossed the drain and the depression west of it. This "High Sidewalk" was a favourite "walk" for young couples. The "High Sidewalk" had one advantage over the Maple Avenue "Walk" and this was a sturdy rail young couples could lean against or sit upon. However, sitters had to be extremely cautious for idle dalliance could result in a fall into the lilacs. Both of these "walks" were extremely popular on a summer evening and, looking back, I wonder how many of my older readers are here as a result of a marriage proposal made while courting on one of these walks.

When did sitting, or roaming in the gloaming, begin to lose interest? Marshall Berman, in his book "All that is Solid Melts into Air - The Experience of Modernity", feels that the interest in twilight chats on porches began to fade when TV and air conditioning made it more comfortable and interesting to stay indoors on a summer evening. I feel that the advent of radio in the late 1920s was the beginning of the decline in twilight chats on the porch. One radio show in particular had a strong impact on roaming in the gloaming. I refer to the 15 minute show "Amos & Andy" which went on the air at 7 and 11 p.m. This comic show about two black men who ran "The Fresh Air Taxi Company", drew people from their porches to their living rooms. "Amos & Andy" would not be acceptable in 1992 as it had racial slurs. I never liked it but many people did and I will not accept guilt for their likes and dislikes.

Other factors led to the demise of "gloaming" activities. One of these was the introduction of Daylight Saving Time in summer that lengthened the period after supper. Another may have been the increase in organized evening sports for children that drew both children and parents to distant sports facilities. A third factor may have been the fact that many parents had jobs that had to be taken home at night and put into a computer. Finally, and probably the most important factor, was the universal ability of motor-cars that permitted instant transportation to distant places.

In any case, the sound of "Wheel of Fortune" has replaced the "wuthering" of wind in the chimney and the slamming of a porch door is not followed by the clinking of a glass of lemonade but by the sound of a car being started. Times, attitudes and interests change with the years and I will not say that those of 1992 are better than those of 1922.1 do wonder sometimes, though, what the people of 2092 will imagine is important? 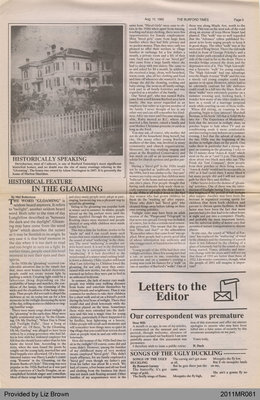