Creator
Robertson, Mel, Author
Media Type
Text
Item Type
Articles
Description
From the 1970s through the 1980s, Mel Robertson wrote many articles for the Burford Advance and Burford Times on the history of Burford Township. This clipping contains the article "Many Happy Birthdays, Canada" describing celebrations of Canada Day in Burford throughout history. The article may not have been republished.

^ 125th birthday last week it may he of interest to recall how Burford celebrated "Dominion Day" in the past. However, before recording these events we must remember a number of things.

First, since I do not have a complete list of old papers I must confine my observations to the papers I have.

Second, since transportation in the early days was not as easy, or as available, as it is now people tended to stay at home and organize their entertainment from the local talent that was available. Few people had cottages at the lake and even though train service was good most people did not wish to spend the day making the train changes that were necessary even to get as far as Port Dover.

Third, in the late 1800s and early 1900s there was great stress on the British Empire and its military successes throughout the world. Consequently, most holiday festivities revolved around some sort of military display. This was much in evidence locally where almost every man belonged to the Dragoons and "God Save the King (or Queen)" was sung at every gathering no matter how small. Children were taught such jingo songs as "We'll Never Let the Old Flag Fall" at school. "O Canada" was never sung although "The Maple Leaf Forever" was used occasionally. Papers seldom mentioned pride in being Canadian but confined their patriotic editorials to the hope that Canada would become "A jewel in the British Crown".

Fourth, no one in the Burford area had ever heard the word "multiculturalism". The population was almost all Anglo-Saxon and the stress was not on understanding people of other racial backgrounds but rather in trying to establish your own position in the Anglo-Saxon social ladder. No attempt was made to hang guilt on people for the social errors their forebears had made in the past. That was the way it was and personally, even in 1992, I refuse to accept any guilt for the fact that one of my forebears was the captain of a convict ship that took prisoners to Tasmania. He probably did not serve them filet mignon every day but that was the problem of his time and not my problem.

Thus I record the attitudes of former

times with the hope that people will recognize the errors that were made and not try to repeat them.

My first record of Burford area "Dominion Day" celebrations is in the "Times" of July 1, 1886 which advertised that the main event would be the Congregational Garden party. The following week the paper reported that the garden party had taken place on the lawn of Mr. & Mrs. J. Padfield (the 1851 house on King St. East) Entertainment was provided by Prof. Carpenter's music club. Prof. J. Carpenter taught violin, piano and organ in Paul Harris' house on Maple Ave. South where he gave lessons in "scientific violin teaching" which he advertised as the quick way to become a fiddler. The paper noted that the Burford Brass Band would not be available as it had been invited, along with the local cavalry troop, to be part of a big parade in Norwich. The absence of the band also curtailed the annual "Nightshirt Parade" with which Victoria Day and Dominion Day were ushered in. This was the parade that was started at daybreak with a heavy explosion of gunpowder to wake people up. Then the band led an impromptu parade through Burtord which was so impromptu that men in their nightshirts joined the revels. The July 8 "Times" also recorded the fact that local runner, Martin, Dunn had received a gold tie pin for winning a race in Norwich. The "Hatchley Chips" correspondent noted that many residents of the area had gone to Norwich. These did not include the "local wheelbarrow expert" who had been warned that a heavy fine awaited him if he repeated his former efforts at upsetting vehicles and ticket booths. This apparently referred to a local drunk who had run amok in 1885 while pushing a wheel barrow. Other references to drunkenness came from the correspondent of the "Vandecar Items" who expressed the hope that the "celebrants" from that area would have recovered sufficiently to be "fit for work about the beginning of next Fall".

The inclusion of the Burford Band and the local dragoon troop gives a good idea of how military things were stressed in 1886. The band and the militia men (complete with horses) would have had to travel by special train to Norwich and back. A later paper records the Norwich report of the parade and how everyone cheered

when the "Manley and warlike" dragoons "issued" on the scene and how they attracted the "admiring glances" of Norwich young ladies. In Burford the young ladies had to be content with Professor Carpenter's rendition of "Humoresqiie".

Jumping ahead to 1909, for the simple reason that I do not have papers to cover the intervening years from 1885, two events dominated Burford's celebrations. One was the lawn bowling tournament with Norwich that took place on the green behind the present Township office. The other was the Trinity Church supper and garden party at the Fairgrounds. There a sumptuous outdoor supper was provided and the Burford Citizens Band played. Speeches were made by the Hon. J.H. Fisher M.P.P. and T.S. Rutherford. The grounds were lighted with coal-oil torches provided by Mr. Kelly of Cathcart which, from reports, provided a "romantic setting" for strolling young couples. Over $100 was taken which was a considerable sum in 1909 when many men made only $1.00 a day and teachers taught for about $100 a month, if they were really lucky.

The local editor confined his remarks about "Dominion Day" by writing that as many people left Burford on the day as came in. The main thrust of the "Dominion Day" editorials was the proposed formation of a local Scout troop. This proposal inspired the editor to hope that the boys would have use of the armory where they would be drilled, taught sword drill and prepared in every way to become militia men when they got old enough. People who felt that Scouts should not be a form of military service were condemned and the possibility of "sham battles" with other Scout troops was anticipated with relish. The "Advance" of July 6 only referred to the names of "Dominion Day" visitors. The editor reserved his commentary to the hope that the government would put a plaque at the public school to commemorate the first telephone concert that Alexander Melville Bell had conducted between the school, the Burford telegraph office and Tutela Heights.

In 1910 the chief Dominion Day excitement was the first lighting of the streets with electricity. These were installed by the local electric company after an almost endless debate as to whether the lights should be on poles or on wires down the centre of the street. Since the local electric company's generator at the mill broke down frequently and was shut off at 11:00 p.m. each night these lights were hardly the boon that they were expected to be. On the day itself there was a bit of British Empire muscle-flexing but the main event was a tennis tournament at the Alpha Tennis Club that maintained two grass courts in front of what is now the nursing home on King St. East.

Out-of-town events dominated the July 7 "Advance". At the Princeton Methodist church garden party the Burford Band played so sweetly that visitors from several places rushed to sign it up for their garden parties. In Norwich, July 1 was the main day of the town's celebration of its 100th anniversary. The "Advance" editor attended the Norwich festivities and noted that many Burford people were present including Dr. F. Johnson and his brother Will, Mr. & Mrs. Chas. Johnson, Mr. & Mrs. G. Secord, Mr. & Mrs. Frank Smith, Mr. E. Chrysler, Mr. J. Shellington, Master A. Metcalf, Mr. & Mrs. J. Gavin and Dr. & Mrs. T. S. Rutherford. In "Bonnie Scotland" the Congregational church held a large garden party on the school grounds that took in $137.

In 1911 Dominion Day celebrations were completely overshadowed by week-long activities that revolved around the opening of the canning factory. These involved the erection of the 60-foot steel smoke stack, the testing of the machinery and the arrival of 24 "hands" from Buffalo to operate it. All Burford flocked to see this enterprise get started and editorials flaunting the power of the British Empire were replaced by exhortations for farmers to grow enough peas to keep the machines running. Local toughs eyed the Buffalo workers with mistrust and began to flex their muscles for the knife-wielding fights that followed. As on previous Dominion Days garden parties were prominent and in Scotland the annual Congregational festival drew $120 more than it had made in the previous year. This garden party was such an outstanding success that a ViMf roUimn of the "Advance"

was devoted to the names of out-of-town guests. In Burford the local Congregational church also held a garden party and supper on Henry Cox's lawn. There dinner was served on tables under trees on one end of the lawn, a booth at the other end did a "roaring business" and in between the verandah of Mr. Cox's residence offered an excellent stage from which the Oakland Quartet sang and local dignitaries made speeches. Filling the intervals was music of the hard-working Burford Band. This would appear to have been a well-run garden party for in the next issue of the paper Henry Cox thanked people for not tramping on his flowers and plants.

And so Dominion Days came and went and the types of celebration changed. In the 1920s, before everyone had an automobile to take them out of town, "Field Days" at the fairgrounds dominated the festivities. These included various athletic contests, Softball games and sometimes equestrian events including jumping. On one occasion things were made more exciting when a horse refused to jump a barrier and leapt into the ball diamond backstop instead, bringing the whole thing down on top of the catcher, batter and umpire. This unexpected intrusion delayed the game but after the horse and rider were untangled the backstop was re-erected and the game continued. Later when the powerful Bluebirds girls softball team became widely known, Dominion Day "Field Days" usually included a game with a strong team from London, Hamilton or Toronto.

Eventually day-long celebrations were replaced by evening fire-works and then, when automobile transportation became universal, people either sped away to far-off celebrations or stayed at home to watch them on TV. More people now sing "O Canada" but more people also take the country for granted and choose to push their own personal "Rights and Freedoms" ahead of their responsibilities toward the country and their fellow Canadians. However, let us hope that the enthusiasm aroused by our 125th birthday will be carried on into future years. 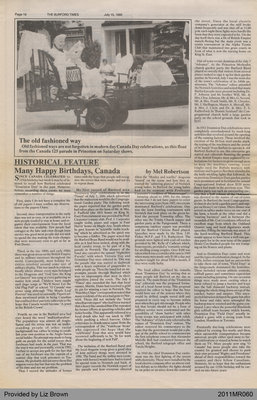