Home (Advanced) → What's New → Details
The Villages of the Plain by Mel Robertson, from The Burford Times
Description
Comments (0)

Creator
Robertson, Mel, Author
Media Type
Text
Item Type
Articles
Description
From the 1970s through the 1980s, Mel Robertson wrote many articles for the Burford Advance and Burford Times on the history of Burford Township. This clipping contains the article "The Villages of the Plain". The article may not have been republished.

THE VILLAGES OF THE PLAIN

DURING THE PAST FEW WEEKS I have received a number of requests from public and high school students for information about communities in this area that have increased, or decreased, in size over the past 125 years. This is required for the preparation of essays. In compiling this information I came upon considerable data from old "Brant County Gazetteers", which include industries, schools, churches, etc. as well as the location of all inhabitants. I pass this on for whatever it may be worth.

In 1861 Burford Township has 5,599 inhabitants of which 502 were natives of England or Wales, 359 came from Ireland, 216 from the United States, 16 from Nova Scotia or P.E.I., 273 from New Brunswick and 16 from Prussia. The main bulk of the population is described as "Natives of Canada,not French".This totaled 4,078 without further explanation. Don't bother to add all those figures and tell me that my total is wrong. I am more interested in wondering why the diligent people who made the count could not find one more person so that the grand total would be 5,600.

In 1868, Burford (or Claremont) is described as follows: A Post village on the London-Hamilton gravel road... It contains four churches - The Episcopalian (Anglican) was built in 1855 and seats 302. Cost $1,800. The Weslyan Methodist cost $1,000. The Baptist was built in 1866 and cost $800. The Congregational church was built in 1835. This church, plus the cemetery, is worth $3,000. The schools are brick and frame in two departments. There are 150 students under principal John Lin-ton and Miss Green... There is a Masonic Lodge No. 362 and a Temperance Lodge No. 81. General merchants are Ira Day and Henry Cox. There is a large cabinet shop run by Wm. Hearne. There are two hotels, three doctors, three shoemakers, three blacksmiths, a saddler, three butchers, a weaver, a cooper, a milliner and a carriage and wagon make. Population - 400. There is a good hall and a drill shed with a strong militia unit. Mails daily.

Cathcart (or Sydenham or Cathcart's Camp) contains a Weslyan church, a school house, one hotel, two stores, one wagon shop and one blacksmith. Population - 50. There is a large cheese factory.

Harley (or Derby) Population -100. Has a Weslyan church,a fine brick school for 150 under Mr. J.B. Moore and Miss H. Moore. Two stores, a good hotel under Mr. Conklin. Mr. Muirhead's carriage factory is 26x40, two stories high where four or five hands turn out carriages, wagons, sleighs and cutters, There is a shoemaker, a tailor and a teamster. Jas. McLellan is postmaster.

Kelvin - A post village. It contains two churches - the Congregational erected in 1861 cost $800 and the Messiah church erected in 1866 at the cost of $1,000. There are two Weslyan churches - one east and the other west - both on the townline. Hall Malcolm's shingled and stave factory

New Durham - A Post village with mail daily. Population - 80. Two stores, one hotel, a wagonmaker, a church, a tavern and a blacksmith.

Bishopsgate - Laid out in 1846 by Col. Whitehead and Russel Smith. Lots were $50 to $100. Surveyed by Lewis Burwell. Population -100. One store, one foundry, a machine shop, one hotel, two blacksmiths, one watchmaker, one lodge - Imperial I.O.O.F. No. 37. Mr. Bingham's foundry was established in 1845, size 40 x 50, three stories high with wings for blacksmith and moulding shops. Twelve men are employed with an engine of 12 h.p. They turn out $7,000 worth of reapers, mowers, drills, stumpers, ploughs, harrows and cultivators annually. One Presbyterian church. Once the home of Col. Perley, noted politician and government supporter.

Scotland - Village laid out by Eliakim Malcolm. Lots sold for $50. Post office opened in 1836. First hotel by Horace Foster in 1830. First gristmill 1861, first saw mill 1848. The village now (1868) has one coopershop, one cabinet shop, two stores, three blacksmiths, one fulling & milling factory, three doctors, two schools with average attendance of 115 - one grammar school under F. Haight and one common school under Mr. Thomas; two churches -The Baptist built in 1849 cost $400 and the Congregational built in 1847 at a cost of $800 -; four wagon shops, one harness shop, one stave factory, one saddler. Mails - daily.

Mt. Vernon - (or "Checkered Sheds") -Laid out in 1836 by T. Perrin. Surveyed by L. Burwell. Post office -1848. T. Perrin first post-master. First store was Perrin's in 1835. First hotel 1830. First gristmill by Perrin in 1848. Perrin also established a woolen factory, a cooper shop and barrel factory. Has one store, two tailor shops, two hotels, two wagonshops, three shoe shops, one harness shop. Was once called "Checkered Sheds" from a horse shed that stood opposite Kenny's store. One hotel was so large that early papers describe large crowds going there to dance on New Year's Eve. The Mt. Vernon Academy was built in 1855 by Mr. Gadson. Attendance is 100. Mr. Furcham is principal. One Weslyan church built at a cost of $2,000. Mail received and dispatched twice daily. Population is 150. A very prosperous village.

There are other places such as Fairfield, Hatchley, Mt. Zion, Victoria, Northfield, etc. which do not appear in the Gazetteers I have. However, they were very active places. For example, in 1886 the Salem reporter for the Burford "Times" mentioned an active Literary Society, a Library and school activities. In the same paper the Northfield "Nubbins" section refers to Literary Society meetings and organizations at St. Paul's church. It also calls the place "a town". Likewise, the "Fairfield Whispers" refer to a host of activities involving the church, the school, a men's club, sports teams, etc. Hatchley is mentioned frequently in Mr. Yates' writings. When I locate more information about these places I will pass it on. In the meantime, if students wish to do essays on any of the local communities I would suggest that they seek copies of the Brant County Gazetteer that were published annually. These should be ..available in the Brantford Public Library or the Brant County Historical Society.

Before closing it may be necessary to explain some of the terms used in the "Gazetteer" to describe industries, etc. A fulling mill cleaned and thickened cloth. A cooper was a barrel-maker who made barrels with the staves turned out by a stave factory. Pot and Pearl Ash were two forms of Potassium Carbonate made from vegetable ash in iron pots. A common school was another name for a public school. Grammar school was a more refined name for a public school. It was based on the early schools that emphasized the teaching of Latin, writing, language and grammar. A Weslyan Methodist church was one of the forms of Methodism that was founded by John Wesley. Other forms were Primitive Methodist and Free Methodist. The main portion of the Methodist church joined with the Congregational church to form the United Church.

As a final note, I would like to emphasize that this article is not intended to be definitive. My only intention in publishing this information is to give students a base on which to work if required to do an essay on local communities. There is, without doubt, more information available and it is "Yours to discover". 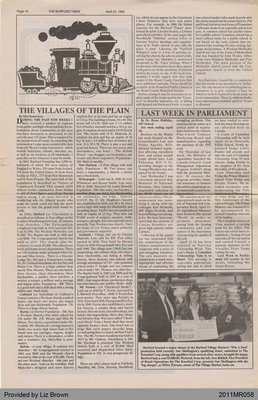