Creator
Robertson, Mel, Author
Media Type
Text
Item Type
Articles
Description
From the 1970s through the 1980s, Mel Robertson wrote many articles for the Burford Advance and Burford Times on the history of Burford Township. This clipping contains the article "The Secret Club of Childhood". The article may not have been republished.

The Secret Clubs of Childhood

NO HISTORY OF BURFORD boyhood in the 1920s would be complete without some reference to the many little secret clubs, lodges or whatever they were called, that existed among the little boys of the time. What were they like and why did they have their brief existence?

Here I must pause to say that these were boys' clubs from which little girls were excluded. Why did these early signs of "gendering" exist? For those people to whom such words are important I would like to emphasize that in the 1920s sexual separation was the accepted thing. There were separate doors at school, separate playgrounds, separate Sunday School classes, separate stairs and drinking fountain at high school, separate skate changing rooms at the rink and separate days when boys and girls could use such facilities as the gym and library at the High School and the hall at the public school.

Indeed, sexual separation was stressed so much that one of our male Sunday School teachers warned us regularly that if we wished to get anywhere in life we should shun the company of girls. He argued that such associations would stunt our growth and even recommended instant jack-knife surgery for any boy who showed any precocious interest in girls.

Thus little boys tended to congregate with other little boys except at birthday or Halloween parties. If there were secret clubs for little girls we never knew for, whereas most of us had sisters, we never heard them discuss such organizations. So that is the way it was (like it or not), and anyone in 1992 who suffers a trauma in hearing about such nonsense can stop reading this article right here.

One of the main reasons behind the formation of so many little boys' clubs was the fact that in the 1920s there was no TV, no Nintendo, no computers, no organized sport, no electronic toys and no sports facilities. Thus, little boys were left to organize their own play time and much of this was based on the books they read or the stories mothers or "aunts" told them. There was also considerable emulation of adult activities such as going to lodges and the bustle after supper when Dad had to go to "lodge night".

"Lodge night" was a mysterious night to most little boys for we knew nothing about what went on at the lodges. All we knew was that our fathers said the Masons kept a goat which was used to butt people who were being initiated into the lodge. We listened to such tales with wonder and snooped around the local Masonic Temple hoping to catch a glimpse (or a smell) of the fabled creature. We never saw any evidence of the goat and since our fathers smiled when they talked about it, we doubted its existence.

Many lodges have existed in Burford from the earliest times. These have included the Masons, the Odd Fellows, the Orange Lodge, The Young Britons, The Woodmen of the World, The Grange Society, The Foresters, The United Farmers, etc., etc. The existence of these societies must have had some bearing on the desire of little boys to form secret societies of their own.

Most little boys' clubs of the 1920s were spur-of-the-moment things formed on the spot without previous planning. The discovery of a little hidden place in someone's barn or a clump of bushes on an island at the creek would inspire someone to say, "Let's form a club and have this a our club house." It was just a "club".

Membership was usually limited to the boys who had found the place and such restricted membership was rigidly enforced. This was often the cause of confrontation with other boys who wanted to join or who wanted to "have their own way". I recall one such confrontation when a group of dissidents attacked one of our clubs. The club house concerned was in an old chicken house that stood at the back of the Lat-timer property on King St. East in Burford (now Holy Trinity parking lot). The front of this little building was mostly glass and the attackers smashed this with a volley of stones, one of which severely cut the face of a club member. The boy's father, who was manager of the Royal Bank, immediately cancelled the club's charter and all members followed him to the home of the stone-thrower to hear him berate the boy's parents. This club was short-lived but it taught us the dangers of throwing stones and of living in glass houses.

Another favourite place for little boys clubs was an old smoke house that stood behind the 1851 house on King St. East. This was an ideal location for a club as it was rain-proof and had a door that could be locked. The only drawback was the fact that the floor was covered with ashes that stuck to your boots and the walls were covered with soot that came off on your hands (Talk about the feared Black Hand society of the day!). Another advantage of the smoke house was the fact that it stood by a large grove of tall lilac trees that could be swung through when we were in a Tarzan mood, or where we could hide when we were pretending to be "Fearless Hunters".

One smoke-house club was highly religious in nature and the boys who founded it felt that the soot-covered walls were not in keeping with this aspect of the club. Consequently I donated a number of large card-board cartons from my father's store. These were cut apart and used as wall board.

Club meetings were "after four". They

consisted in reading the Sunday School lesson and reciting long prayers from "The Onward" and "The Northern Messenger". A couple of meetings were held and then I was expelled as a heretic as several members declared that they had seen me open my eyes during a long prayer. (How could they have noted this if they had not opened their own eyes?) I then emulated Cromwell and trashed the club by confiscating the cardboard siding. Thus another club was disbanded.

Yet another clubhouse location was in a drive-shed and garage that stood on what is now the Township Office parking lot. This consisted of a three-rig shed for horses and a concrete addition that housed a one car garage, the Royal Bank outhouse and a little concrete room of no particular use. This little cell was the home of several little clubs. I can recall that most of these clubs were less religious in nature than the one in the smoke house. One feature of the meetings were comic skits performed by two boys who are now well-known retired businessmen. I will not mention their names but I would like them to know that their antics of long ago still remain in my mind as some of the most humorous things of my childhood.

Considerable ingenuity was involved in the formation of some "club houses". One of these was in the Methodist church sheds. In the 1920s two long sheds stood behind the United church. They faced inwards and were closed at the south by a high fence. They provided excellent shelter for the many horses that drew people to church before motor cars became commonplace. In the 1920s the church was heated by two forced-air furnaces, one of which burned four foot lengths of wood. These mighty sticks were piled in one end of the church shed. Boys found that by shifting the wood they could create a little cave which, when roofed over, could accommodate about six little boys. Like most clubs this one did not last but when Alex Forbes, the church custodian, found the little cave he was sure that someone had stolen a large quantity of

Another club was located in the barn that still stands behind the former Sprowl's store. The upper part of this barn housed a hay loft that in the 1920s was half full of hay. It was an excellent place for little boys to tumble and build trapezes. It was decided that a club should be formed in the loft. It so happened that the boys who decided to form the club had been reading books where there were secret doors and consequently it was decided that a secret door would be built. At the time a large wood shed was attached to the west side of the

barn and it was found that in one dark corner a little secret door could be cut that would give access to the woodshed. This was done. Later the wood shed was torn down but anyone looking at the west end of this old barn will see, high up, the crudely-cut little secret door.

I don't know when little boys stopped forming clubs but I think it was when we had graduated into the double figure age of 10. Then we began to realize that we could have more fun in such real clubs or groups such as the Scouts, The Trail Rangers and the Tuxis Boys.

What went on at little boys' clubs? Nothing in particular. There was no agenda for meetings, no executive, no aims or plans. No - everyone just sat there and everyone talked at once. No one said, "I borrow to be president" or, "I borrow to be third Recording Secretary", or to us.e the frequently-employed word "borrow" to gain "empowerment". The only authority that existed in these clubs was the authority assumed by the kid with the loudest voice. The only satisfaction gained in these clubs was the satisfaction of "togetherness" and comradeship.

Did these little boy clubs accomplish anything? I don't know and I'm not particularly interested in trying to find out or to search through psychiatric books seeking multi-syllabic words to describe the serious social and mental disorders that prompted us to form them.

Did we learn anything from our little clubs? Probably not. They may have had a certain inspirational value, for a few members became high and useful leaders of lodges, clubs and charitable organizations. There was, of course, the lifetime friendships that were created.

Do little boys of 1992 have clubs? I doubt it, for judging from my observations, most little boys of the eight to 10 age group now consider themselves too electronically sophisticated to get involved in such "kid" stuff. There is nothing wrong with kids becoming skilled in the operation of complicated electronic devices at an early age except that most of such activity tend be rather grim. After all, why belong to some silly kids' club when you learn to break your teacher's arm by a do-it-yourself book or wreck someone's computer program by inserting dirty, four letter, "virus" words into it?

Do I look back at the kids' clubs of my childhood with nostalgia? I don't think so. My only occasional remembrances are of humour and friendship, two scarce things in 1992.

As an historian, I will leave it at that. 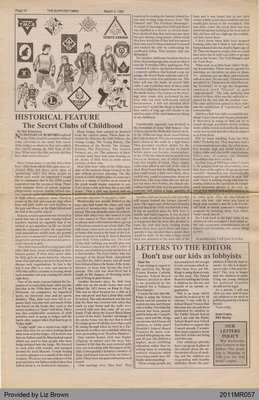