Creator
Robertson, Mel, Author
Media Type
Text
Item Type
Articles
Description
From the 1970s through the 1980s, Mel Robertson wrote many articles for the Burford Advance and Burford Times on the history of Burford Township. This clipping contains the article "The North Wind Shall Blow" describing winter conditions in Burford in the 1920s. The article may not have been republished.

The North Wind Shall Blow

During the past few weeks we have had some very severe weather with wind-chill factors that would freeze exposed flesh quickly. During my necessary travels in this weather I have noted the almost complete absence of little boys doing anything out-of-doors that they did not have to do. I could not help but contrast this with little boys of over 60 years ago who played out-of-doors in every sort of severe weather.

This reason for this, and that, is obvious. Today little boys have Nintendo, computers and other electronic devices to keep them indoors and there is a covered arena where they can play hockey. Also, many homes have rec rooms where they can "keep out of the way". Consequently there is no need for them to emulate brass monkeys and risk dismemberment by facing the bitter cold.

Sixty years ago there were no arenas, no rec rooms and no electronic playthings. Most houses had a kitchen, a dining room, a parlour or double-parlours. There was no place for a little boy to "keep out of the way" and parents thought nothing of saying to boys "after four" and on weekends, "Get out from under my feet. Why don't you go outside and play?"

This was never said to little girls, for 60 years ago people still felt that "a woman's place is in the home" and that little girls could stay indoors and learn to "take their place in the home". Consequently, they stayed inside in winter and did "house work" such as cleaning, washing dishes, etc. Thus, there was as little chance of a mother saying to a daughter "go on outdoors" as there was for her to give a boy a dust cloth and tell him to "get on with it". Thus, little boys became hardened to the winter elements and thought nothing of setting off through a blizzard to skate on the "Dead Pond" a mile north of the village or in going sleigh riding at Bishopsgate hill.

However, in mentioning the way little boys were shoved out into the cold, we must not think that parents did not consider their comfort when out-of-doors. Thus, it maybe interesting to recall the winter clothing that protected little boys from the blasts that "beat across the moor".

Let us start at the bottom. That was was protected by a set of long underwear consisting of woolen drawers and a "ganzey" shirt or, if the parents were more up-to-date, by a suit of Stanfield's "combinations". Next came a pair of Mackinaw pants that laced at the knee and were flared at each side like riding breeches. These were usually brown or in a colour called "heather mixture". They were very warm, could break almost any wind and were smart to look at. Feet were shod with home-knitted black, ribbed, knee-length stockings that fitted into either rubber shoe-like boots or galoshes. Some boys boasted knee-length laced-up boots while others sported laced-up leather leggings that fitted over the socks and buckled under the instep. These

latter leggings were considered to be very smart and little boys endured them because they felt that such leg-wear made them look like cavalry officers, Mounties, gold miners or some other character from the books they read. Indeed, there were many story book characters like "Connie Morgan in Alaska", "Bobby Blake in the Frozen North", etc. to emulate.

Up top was at least one home-made sweater of such blazing hue that you felt warm before you put it on. Then to top everything was a Macknaw coat. This was the universal winter wear for most little boys. It was made of dark heavy material that reached to the knee, had belts on the waist and sleeves and a collar which, when turned up, reached the top of the head. Parkas had not been invented for little bovs 60 years ago but a few "show-offs"had leather aviator's helmets someone had saved from the War. The less fortunate wore tassel caps or toques plus bandaging scarves.

Hands were protected by as many pairs of woolen mitts as the wearer chose to put on, but since wool tended to get wet most boys wore leather "gauntlets". These had fingers and were not as warm as mitts, but they had cuffs with fringe on them and big red stars. These, along with the leather leggings, the flared breeches and the leather helmet made the lucky wearer feel sartorially splendid.

Being forced to face winter's wrath 60 years ago may sound cruel in 1992, but in fact it was endured with a combination of stoicism and indifference. Most houses in Burford lacked central heat and were warmed (not heated) by two or three stoves whose operation was determined by someone's ability to "poke up" the fires. As a result, many houses had places where the only noticeable difference with the outside was the absence of snow on the floors. Thus, the transfer from indoors to outdoors was not the traumatic thing it might seem to be in 1992. In other words, little boys of 60 years ago did not face a dramatic change in temperature when their mother, or the "hired girl", told them to "get out from under my feet and go outside and play".

Little girls of 60 years ago did not have to face involuntary eviction from their homes in the way little boys did. In other words, they went outdoors in winter when they wanted to and not when they were ordered to go. When they faced winter, little girls, like little boys, were clad in warm and heavy things. The big difference was the fact that 60 years ago many parents still felt that it was "unladylike" for little girls to wear slacks or trousers. Thus, they wore heavy skirts over long woolen panty-hose type tights. Next to the skin they were protected by woolen "Long Johns" (what a gender-forbidden word). Feet were protected by galoshes and hands with mittens. Sweaters and scarves completed the cozy bundle. On top was a "Red River" coat - the female equivalent of the boys' Mackinaw. This coat was called "Red River" because it was blue with a red woolen lining. How this smart and practical coat got its name I cannot say. Did the little girls who lived by the many Red Rivers in the world wear such coats or was the name (like Mackinaw) a sales promoter's choice? For head gear little girls wore tassel caps, toques or homemade hats. A perusal of 1920s Burford Public School photos show that many little girls rejoiced in big, round, velvet hats obviously made by the diligent local dress-makers whose nimble fingers produced such warm uniformity.

So, that is the way little boys and girls faced winter 60 years ago. Did little boys become better men for having been forced to face the winter weather? I don't think so. None of us developed into Arctic explorers, Zamboni operators or managers of quick-freeze factories. The only benefit I can think of is that we may have developed an

appreciation of Nature and a realization that if we accepted our own limitations we could enjoy the out-of-doors in winter.

For my own part, I think that my childhood exposure to severe cold in winter helped me to understand the sever cold I had to endure when, as an adult, I was stationed in the sub-Arctic. There it was obvious that the most chronic "belly-achers" were not the older people but people who had never been forced into the cold as children. I also think that my childhood experiences in the snow gave me an appreciation for the ingenuity of northern people who live in severe cold for most of the year.

In ending this article, I suppose that as an older person, I am expected to say that the "good old days" were better than the present. Not a bit of it! Every age has its accomplishments.

Today kids can insert a "virus" into someone elses computer program. In the.1920s we knew when our ears were frozen and what to do about it. 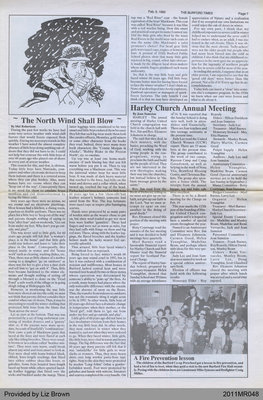