Creator
Robertson, Mel, Author
Media Type
Text
Item Type
Articles
Description
From the 1970s through the 1980s, Mel Robertson wrote many articles for the Burford Advance and Burford Times on the history of Burford Township. This clipping contains the article "The Unheard Sounds of Spring". The article may not have been republished.

THE UNHEARD SOUNDS OF SPRING

By Mel Robertson The Unheard Sounds of Spring

Every year when "Spring has sprung and the grass has riz" several things happen. In the real old days the fancies of young men turned to thoughts of love. Cuckoos, if present, began to think of summer by singing "Ihude" (this meant loud, not lewd) and people either headed for the woods or went on pilgrimages. Later when people could write and had something to write on, sloppy verses were penned to girls or young men, who probably could not have read them if they had received them. As we became more civilized and began to have big wars, generals always planned "Spring Offensives" that killed a lot of young men who would rather have been making love instead of war. Everyone has thoughts of what his, or her, Spring has been, or will be. My memories are in keeping with my attempts over the years to chronicle the life of a 1920s Burford child and these are memories of the "Unheard Sounds of Spring".

What are the "Unheard Sounds of Spring", you may ask? Well, they are sounds that were heard in the 1920s that are not heard today. Sure", you say, "But why were the Sounds of Spring in the 1920s different from the Sounds of Spring in the 1980s?" They are different because in the 1920s things were less mechanical and electronic. No. 53 Highway had no night traffic and little by day. Houses did not have furnace motors, refrigerator motors, air conditioners, heat pumps, electric fans, water pumps and other electrically driven things that made one sort of noise or another. In other words life was quieter and, if that is a good thing depends on if you need constant noise to keep you going. Of course, some will say, "Why bother about the unheard sounds

of the 1920s and why do older people always talk about The Good Old Days?" To this I say, very quickly, that the so-called "Good Old Days" were not particularly good and the only reason for recalling them is the hope that people will have enough sense not to repeat the silly things they did then.

So let us go back to first light on a Spring morning in 1920s Burford and more specifically to the bedroom of a child who has been awakened by the rising sun He lies there listening to the distant barking of farm dogs and the funny noises in the stove pipes that are made by the dying fires in the stoves. If it is about 6 a.m. the sound of the "Wildcat" whistle of a Brantford factory is heard which, for the lack of other loud sounds, carries the 10 miles to Burford with ease. Closer at hand are the sounds of a rising family and the rat-a-tat noise of father shaking the stove grates and "poking up" the fires. This was a familiar sound in the 1920s as most houses lacked central heating. Stoves had to be kept going all night until almost June and "poking up" a dying fire required special skill and even inspired such verses as "Willy dressed in silks and sashes. Fell in the fire and was burned to ashes. Though the room is getting chilly No one wants to "poke up" Willy". Indeed, the ability to keep fires going was valued so highly that marriage counseling books urged young women to seek husbands who knew how to keep fires going and how to "poke them up" when necessary.

Meanwhile back in the bedroom the wide awake child hears a whole series of now "Unheard Sounds" - the priming and pumping of a wooden pump, the rattle of kitchen things and the impolite clink of chamber pot covers. Since most 1920 Burford houses lacked bathrooms, this latter sound was a common one, although in houses

where people did not want to be embarrassed the noise was deadened by crocheted cover silencers of exotic design and hue. Amid all this racket was a curious rasping sound as of beavers eating shredded wheat and that was father shaving in his bedroom with a straight razor. This sound varied in loudness depending on the sharpness of the razor and if it grew too loud and father's expressions became too scriptural (not my father) there was the "slap-slap1 as the dull blade was 'stropped" on a leather strap.

Shortly before 8 o'clock, off to the south-west, the morning "express" train blows at the 8th Concession and Maple Ave.

crossings. If it is a particularly clear day the church-like ringing of the train bell is added to the "off and away" appeal of the train. Closer at hand, the "off and away" thing is repeated by mother, or the "hired girl", coming to the bedroom door and shouting "Hurrah". This was the common word for "Let's go" in the 1920s and the child got up.

At 8:45 the school bell rings for the first time to hasten the tardy and at 9 it rings again to tell them they are late. With school "in" the sounds of the village become the sounds of horse-drawn traffic, the musical clinking of Scotty MacDonald's hammer as he beats out horse-shoes on his anvil, the "Gee Hup Thar" of teamsters, the sound of iron-shod wheels on gravel and the watery snorts of horses who had "Gee Hupped" as far as they wanted to.

At around 10 the local freight train arrives and as it shunts cars there is the screeching of wheels as it negotiates the tight siding behind the station.

As the day progresses a couple of unusual, and occasional sounds arouse the village. One is the rattle and rush of hooves as herds of cattle are driven along the streets to the

weighing scales in front of the present site of Al Manning's Drug store. Such herds were a real nuisance to people who valued their boulevards but all was not lost for appreciative gardeners rushed out with dust pans to collect anything that was dropped along the way. Later in the day another strange sound is heard form time to time and that is the sound of a steam tractor engine and if Charlie Woodin is moving houses the sound of his big, black, steam engine is heard long before it is seen. There was always something menacing and powerful about the approach of a steam traction engine. Its pace was slow and determined and its voice, though soft, had a very authoritative sound. This was due to the fact that steam engine shave always seemed to have a life of their own. So afar off a heavy panting and the grinding of steel wheels is heard and in due course there is the engine coming down the street like Juggernaut, trailing a house or barn and accompanied by its "handmaiden" the water tank that bore its life fluid. people run to their doors and pre-school children stand open-mouthed hoping that the driver will greet them with a toot on the whistle and since they cannot imagine super sonic speed, dreaming that they might drive such a machine some day.

Of lesser magnitude are the sounds connected with the preparation for next winter's heating and if the Muir Brothers and the Aulseybrooks have advertised bargain-priced coal people rushed to fill their bins. The delivery of coal creates another now-unheard sound for it was shot

into basement bins along a steel chute. Thus there is a rattle and swish as a shovelful goes down the chute. Then there is a pause as the delivery man gets another shovelful. People could tell who was doing the work by the frequency of the swishing. Also fire-connected is the sound of cord-wood being sawed. This is the sound of a one-cylinder gasoline engine that powers the circular saw. It is a "chuck, chuck, chuck (pause) Bang, (pause) Chuck" interspersed with the "zing" of the saw as the log is cut and the thud as the wood is thrown on the pile.

Not to be outdone by the sounds of preparation for next winter is the sound of preparation for the coming summer and I refer to house-cleaning. No housewife in the 1920s feels that she can face summer without taking up all her carpets and beating them and thus the "Whup, whup" of the metal rug-beater is heard.

Interspersed with the less musical sounds of a 1920 Spring day is the almost constant ringing of the school bell, for added to the four morning ringings is one at 1:15 known as the "first" bell and one at 1:30 as the "second" bell. Then there is a clanging at 3 to announce recess followed by one at 3:15 to say that recess was over. At 4 is the final bell of the day, and the rope gets a rest until next morning.

When the school day ends the academic sound of the bell is replaced by the ritual shouting of children at games. Since there are no organized sports, no video games and no computers to entertain children, or turn them into myopic smartasses, children organize their own entertainment.

This is divided into certain games each with its own vocabulary such as "Auntie I over", "I touched you last", "Cheese it", "Home Free", "I borrow not it", "I borrow First Base" (I never knew what the word "borrow" meant), "Lie Low", "One Holy Cat", "High Water", "Three holy Cat", "8-9-10-Red light", etc. These sounds dominate the air until 5 when the east-going "express" blows at the crossings and at 6 when the west-bound train does the same thing. Then people begin to think of supper and a quiet evening at home reading the "Expositor", the "Family Herald" or the "Delineator". Then if there is a radio, KDKA Pittsburg is tuned in for the "A&P Gypsies" hour. Shortly after 9 men begin to "poke up" the fires for the night and by 10 the streets are quiet except for the few boys the "Advance" editor condemns as "Shiftless" for staying up until 11. After that the only sounds are the coming and going of the local bootleggers.

If you have read this far you may ask why I have described certain sounds as now "Unheard Sounds of Spring" when they could have been heard at other times of the year. This is true but I described them as sounds of Spring because that was when people got their windows open for the first time in several months and began to notice such sounds. As the year progressed and windows were open all day people began to take the sounds for granted and not listen to them. However if you need detailed explanations, mathematical equations and computer print-outs to explain everything, we don't speak the same language. 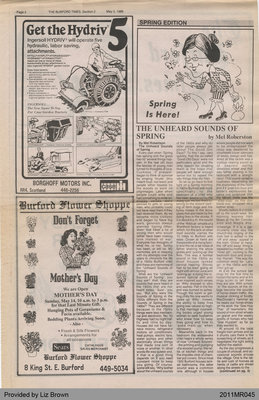