Creator
Robertson, Mel, Author
Media Type
Text
Item Type
Articles
Description
From the 1970s through the 1980s, Mel Robertson wrote many articles for the Burford Advance and Burford Times on the history of Burford Township. This clipping contains the article "Walking on Water and Other Silly Winter Activities". The article may not have been republished.

Walking On Water And Other Silly Winter Activities

The ultimate pleasure, in those days of simple pleasures, was a walk on the frozen creek. There was something in such a walk that placed it in the realm of imagination like the fantasies we conjured from our Christmas books. Here we were doing something we couldn't do at any other time of the year; walking on water, so to speak, and experiencing an ability to visit places that were denied to us in the summer. This was the realm of fairies, or trolls, or whatever other exotic creatures inhabited the books we heard read at night just before sleep; and peering under the creek banks we beheld a world of little caves and weird root formations obviously inhabited by "who-can-tell" folks.

A walk on the creek was something we anticipated from the time of the first frost and if that event took place on a Friday night, Saturday morning would see children rushing to the creek to cast stones on the new ice and crunch warily on the slintery edges.

Thaws were greeted with dismay and frequent trips were made to the creek whenever the temperature dipped below freezing. When the water had endured several nights of frost, the Dead Pond (one mile north of Burford) was tested by throwing stones along its surface and judging the thickness of ice by the sound of the ricocheting rocks. Finally, the day of days dawned when the ice would support a child with only a slight bending. This was called "rubber" ice and if you moved fast enough and didn't bunch up, you could venture on its undulating surface. Then some daring soul would race to the other side leaving damp depressions where the imprisoned water tried to reach the surface. Others would follow until the ice became so "rubbery" that water gushed through the cracks. Then the more cautious remained on shore while the daring got their feet wet.

We were wary about getting our feet wet in those days before intelligence seized us, as we were sure that the least dampness would turn us instantly into pillars of ice to decorate the flats until Spring, or St. Bernard dogs, came to liberate us. Spring we could accept but the thought of great St. Bernard dogs sniffing about our ice-bound feet filled us with dismay. Strange to say, no one ever seemed to think about drowning. Death was a temporary condition experienced only by some unfortunate characters in the books we read and we never fancied it happened to anyone we knew. The warning "don't get your feet wet" was enough to keep us in line for in that caution was compounded everything from decapitation to flat feet.

A walk on the creek was an adventure, thought about, but seldom planned. Lake most of the activities of children fifty years ago, it was spontaneous and completely unorganized. Adult participation was limited to giving permission to go. If any adult had offered to accompany us the trip would have been instantly canceled for few adults were prepared to enter into the fantasies a walk on the creek inspired. Some "aunts" might have qualified, perhaps, but not with a large group for their fantasy-acting was reserved for the special few.

The big bend in the creek was a popular spot for people during the days when walking was thought to be fun and there were many well-worn paths along the creek. The big bend is a picturesque place for here the creek, flowing east, makes a right-angled, left turn to run musically under high, oak-topped banks. The bend is not easily accessibly to-day but anyone with the time and ambition to walk a couple of miles up the creek from the bridge on the North Road, will encounter a scene of beauty not found in many parts of the country.

A walk on the creek west of the big bend offered stretches of good ice through a woods with no deep holes in case anyone fell in. There was a little chute and whirlpool back of Jay Williams' to gladden the eye, followed by a smooth run all the way to the bridge on the Quarter Townline. Then, for the more adventurous, it was clear going to the High Banks several miles farther on.

Sometimes progress along the creek was so effortless and exciting that time stood still and evening found us far away from home with the shadows growing heavy on the ice. Then something akin to panic set in and a race for home, or the open fields, took place with everyone striving to be first and none last. Rabbit tracks that had crossed our westward tracks became signs of pursuing bears as we raced for home.

Every shadow under the banks held some fearsome creature waiting to grab us. Up in the barren tretfs, old bird nests hid silent watchers from that strange land at the borders of sleep, we saw sometimes just as the lamp was put out. Snow-filled wood-chuck holes loomed as entrances to an underground world from which little people peered. Fence posts became sentinels and there behind a stump something moved, warning us of an ambush, at the next bend, that never took place. "There it is again" someone whispered, without saying what "it" was and a renewed burst of speed thrust us on. We all grabbed sticks and wished we had brought the dog to protect us. The business of being frightened on trips of this nature, was part of the "make-believe" world children lived in. It was really "make-believe" fear, manufactured for the situation and any child who did not pretend to be scared was thought to be getting too old for the rest of us. I suppose that to-day this bit of fantasy would earn a trip to the headshrinker but I can't think of anyone in our bunch, who went home and murdered his parents, or wet the bed, as a result of this

Walks east on the creek were seldom attempted due to the lack of good stretches of ice and the fact that at several places, houses were close enough for people to rush out and bellow "You kids, Gedoffa the ice". This would have spoiled the fantasies of the walk. In addition, a walk east soon brought us to the mill dam and pond which were considered to be a bit scarey at the best of times. However, on occasion, the mill pond would be visited and occasionally swimming muskrats were seen under the ice - never a summer fish and we were simple enough to think that they had all gone South.

Another winter activity of fifty years ago that could not be classified as either a sport or a task, was the clearing of paths and walks. Before the advent of mechanical snow-blowers, which have made the maintenance of straight paths relatively simple, the straightness of a man's path was considered to be a reflection on his integrity, character and social position which was almost on a par with the prestige conferred on him by his ability to maintain good fires in his stoves. No man who fancied himself to be a pillar of society ever allowed anyone else to dig his paths and

whenever there was a snowfall he saw to it that good, straight, neat, paths were dug to all the necessary places on his property i.e. the street, the barn, the ash-pile, the woodshed and the backhouse. To maintain respectability, these paths had to be mathematically straight with right-angle walls. Snow had to be piled neatly at one side and the paths discreetly sanded with well-sifted ashes. To do otherwise branded the man as "Trashy" and unfit to hold up his head in the community. Wives, or "hired girls", were never trusted with pathmaking in any socially-conscious family. No indeed, the man of the house garbed himself in suitable raiment (never a holey sweater) a clean cap, and well-brushed galoshes and with a proper shovel, arranged the snow in "suitable" fashion. If ladies trundled by, the shovel was brought to proper attention, the cap was raised and all action ceased until safe passage was ensured. Men seldom worked on backyard rinks. This was not considered to be "man's work" - paths made the made and not rinks.

Looking back it would seem that no matter how much money a man had, he didn't amount to much if he could not dig a straight, neat path in the snow and keep good fires in his stoves.

Well, what was so "big" about walking on the creek, sliding on ice, "bobbing" on sleighs, or coasting down hills? These activities didn't qualify children for anything. They didn't gain Life Masterships which would qualify them to walk on creeks with Life Master Creek Walkers or slide down hills with International Downhill Sliders. What did they do anyway? The answer is as simple as the activities themselves. They gave children simple pleasure and taught them more about their environment that it is possible to learn from books. The only "big" thing about them was that they were small.

Someone wrote "Where are the snows of yesterday, Ah, where are they?" Well, they're still here; just as heavy and deep as fifty years ago buy obviously, more oppressive now that labour-saving, mechanical devices have made them so labourious to handle and regimentation has made children too complicated to cope with them. 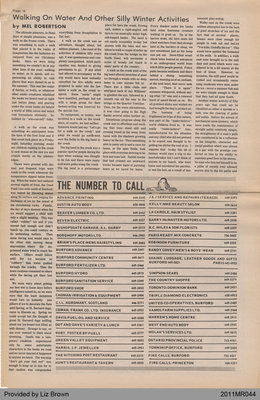