Home (Advanced) → What's New → Details
May I Have Your Autograph? by Mel Robertson, from The Burford Advance
Description
Comments (0)

Creator
Robertson, Mel, Author
Media Type
Text
Item Type
Articles
Description
From the 1970s through the 1980s, Mel Robertson wrote many articles for the Burford Advance and Burford Times on the history of Burford Township. This clipping contains the article "May I Have Your Autograph?". The article may not have been republished.

May I have your autograph? by MEL ROBERTSON

At almost any event where celebraties are present, you will see people running about with books asking for autographs. Most of these people are so pushy, t$4-tramping and rude that it is hard to picture them as the descendants of practitioners of what was once a gentle and sentimental pastime.

I had the good fortune recently, to collect a number of old autograph books which trace the progress (or otherwise) of autograph-seeking in Burford Township for over one hundred years. These books are interesting not only for their local content but also for the fact that they include autograph verses from visitors who came from distant places.

The first of these books is a small, embossed-leather, volume entitled, "The Sutybeam". Its owner was a young girl named Helen who was also known as "Ellen" and "Nelly". She was well-known locally and died in the 1920's at an advanced age. In 1857, when "Helen" opened her autograph book, she would have been a teenager.

The first entry in "Helen's" book is an intricate design known as "The Lover's Knot". It was prepared by someone who signed himself, "J. L. of Paris" and dedicated his work to "True Lovers All". The design consists of several hearts entwined in such a fashion that no mater how you look at them you see at least two. Along the edges of the hearts is the following verse -

The verse is so contrived that when you come to the end, the lines lead you back to the first so, presumably, you could continue to read it over and over until someone came and said, "There, There" and led you away. Nonetheless, the design shows great care and must have taken at least an hour to draw.

Other autographs in "Helen's" book are less intricate although one six-stanza poem written by "E. A." of Gait on July 7th., 1857 has each ine from a different verse of Holy Scripture with notes to prove it.

Almost all autographs dwell on death and seem inappropriate for a teen-age girl. Typical of these lives are those penned by "W. C." also of Gait, on November 1st., 1857, which ran - "May thy passage o'er life's ocean, Calm and pleasant, prove to thee.

Fortune's storms and strife's commotion Blow not on the troubled sea. May thy bark glide smoothly over To that distant happy shore. Where friends, lost friends, again discover, Meeting there to part no more.

One exception to the poems on death is a love poem from which the signature has been cut, presumably by "Helen" after she married someone else. These tender lines declare - Your precious little heart And all thy wealth of love With which I'd scarcely part, For all the joys above. It holds a fairy spell O'er this fond heart of mine. When can it be and shall I tell?

My second autograph book is a gold and silver volume entitled "Forget Me Not". It was opened in Burford on November 4th., 1875 by my Grandmother Emily Wooden with the sentence, "This little book of odds and ends. I dedicate to all my friends". A perusal of this album reveals that the art of Autograph-book writing was undergoing a change. To begin with, the initial entry was not an elaborate "Lover's Knot", but a matter-of-fact comment by Amos and Sydney Littleton, who, presumably, were guests of Mr. and Mrs. Wooden when the book was opened. Their observation on the first page reads, "Nov. 4th., 1875 it was quite snow/j We wee at Charles and Emily Wooden's". Other contributions to Mrs. Wooden's book tend to be equally short and to the point. Sentiment was still there as in Katie Rounds' wish, "May just enough clouds cross your path to ensure a golden sunset" and Ada Ledger's verse - "When floating down the stream of life In your little bark canoe.

I hope you'll have a jolly time, With lots of room for two."

Humour was also evident in Bertha Searles' contribution -"When in the kitchen washing dishes. Remember me and my good wishes" and in the rather bilious offering of someone who signed herself "Ebbie" in 1885 - "Long may you live, happy may you be, Sitting on the woodpile, drinking onion tea".

However, the sentiments of 1857 were not to be denied for the book closes with a verse by L. E. Powell of Toronto - "Gently down the stream of Time, Oh, sailing away our vessels glide, "Til we, at last, through Christ's good grace, Anchor in heaven, side by side."

Five years after Mrs. Wooden opened her autograph book, another local woman started a book which gives evidence that the liberalizing trend of the 1870's was not to be carried into the 1880's. This is a black, gold and silver volume which bears the inscription, "To Nellie from her sister Pollie". Ownership of this book cannot be determined with certainty, but it is understood that "Nellie" was related to "Helen" of the original book. The only definite information about her is that she became an R.N. and died in the early 1950's.

This book, which returns to the older style of autograph writing, opens with an elaborate pen and ink sketch by someone who signed himself, "BBH". This work of art includes palm trees, church steeples, storks, ravens, mountains, lilies and a pond in which a fashionably dressed woman with a bustle, is fishing sedately. In the centre of the pond the name "Nellie" is reflected while from aloft a celestial hand lowers a wreath of flowers bearing Nellie's name. All this activity does not seem to have frightened the fish for the lady with the bustle is landing a whopper. "BBH" must have been noted for his sketches for later in the book we find another illustration entitled "The Garden of Eden" which includes palm trees, birds, vases of flowers, fountains and modish damsels exercising dogs on leads. With this idyllic scene is a verse signed "Nemo" - "If scribbling in albums Remembrance ensures, With the greatest of pleasure, I'll scribble in yours." Sentimental entries show a remarkable recovery in this album but lack the tear-jerking quality of earlier days. Examples are the admonition penned by J. E. Matthewson of Chicago on May 1st., 1883 - "Store in your memory bright days and let the dark ones be unrecorded" and the verse of someone named "Maymie" of Drummondville, whose entry of September 1st., 1889 said - "When the evening sun is setting, And from care your mind is free, When of others you are thinking, Will you sometimes think of me".

These contributions were followed by a verse in Greek whereby someone who was a clergyman, a scholar, or a "show-off" attempted to air his erudition. To use a slang term of that day, I can imagine that this verse was "all Greek" to Nellie.

However, lighter sentiments were beginning to penetrate the aura of doom and death and on August 1st., 1888, H. W. Mcomb of "Castle Frank" Welland, wrote a page that has a touch of romance and mystery about it. His advice "Be sure you are right and then go ahead" was innocuous enough but under his signature Mcomb wrote in small letters, "We whispered softly together on Thursday, December 21st., 1888. For further particulars apply to M.G." The meaning of this postscript is unclear but since Mcomb signed himself "Votre Ami" he can be ranked with the "swingers" of his day since in the 1880's anything French was thought to have a slightly improper air about it, probably because so few people understood the language.

Cynicism a sio reared its head on January 25th., 1889 when Jane Hamilton of Pittsburg, penned this warning -

But never, never, fall in love."

Finally, some wag who signed himself "R. G." entered a verse that must have been a real shocker - "I see you in the future, In a garden full of flowers, Standing by a wash-tub, Scrubbing babies' drawers." One has to wonder if the recipient of this offering was more shocked by its levity, the sentiments expressed, or the fact that the words "flowers" and "drawers" do not rhyme.

The next autograph book in my collection was started in about 1890 and continues into the 20th. century. It belonged to my mother. This book shows another change in autograph verses in that they are almost all one-liners such as that of Allison Martin of Winnipeg who wrote on February 20th., 1889 - "When this you see, remember me" or Nettie Cairn's "Remember me when I'm far off where the woodchucks die of the whooping cough". Other one-liners are "May you never be like a rose whose beajky hides a thorn" or "May your life be full of beauty like a rose without a thorn" or "May your life be a snow-flake that leaves a mark but not a stain". The only lengthy verse is one by someone who signed her entry "Aw there" on February 20th., 1890. It ran thus -"May you ever by happy and live at your ease.

Have a good husband and do as you please".

The final book in my collection is one that was circulated in Burford High School in the late 1920's. It contains no sentimental or religious verses but is strong on "Joe College" humour and nonsequitors. Chief of the latter is a verse - "In the garden of your heart. Let me be a cherry tart." Other contributions seem to vie with each other to be smart-alecky or cute such as one by a musician who wrote - "Don't B flat, Don't B sharp Just B natural", or another "Two in a hammock attempted to Kiss, When all of a sudden they landed like this" (The word "this" is spelled upside down).

Parody was also in vogue as demonstrated by "Lives of great men all remind us, We should choose our wives with care, Or departing leave behind us, Half our natural growth of hair".

One selection, from the many entries in this brown volume, contains a vision of verses to come and was thought to be rather "far-out" for its day "I love you much, I love you mighty.

I wish my pyjamas were next to your nightie, Now don't get excited and be misled, I mean on the clothesline and not in bed."

This album closes with two entries that seem to have been popular at the time. One reads, "By hook or by crook I'll be last in your book". It is capped by a declaration scratched on the cover - "With the help of this quill, I'll be hanged if you will".

Autograph books are still with us in various forms but they have advanced to a point were most of the entries are unprintable. Sentiment, religion, taste and wit have departed in favour of stuff such as "If I wasn't so lazy, I'd love you like crazy", "You remind me of King Kong", and "I love you a lot like a joint of pot". These thoughts may be a far cry from "The Lovers' Knot" of 1857 by they seem to reflect the cynical times we live in. 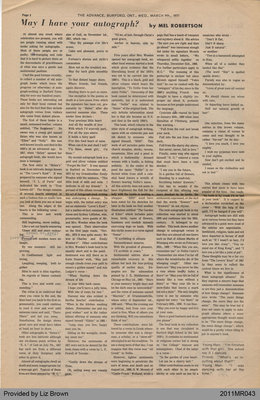