Home (Advanced) → What's New → Details
Away to the Crick by Mel Robertson, from The Burford Times
Description
Comments (0)

Creator
Robertson, Mel, Author
Media Type
Text
Item Type
Articles
Description
From the 1970s through the 1980s, Mel Robertson wrote many articles for the Burford Advance and Burford Times on the history of Burford Township. This clipping contains the article "Away to the Crick". The article may not have been republished.

AWAY TO THE CRICK

(Author s Note: This story was published in the Burford 'Advance" about 25 years ago. It is repeated for this edition of the "Times" at the request of a number of

OUT NORTH of Burford is the "Crick" otherwise known as Whiteman's Creek. Why I say "out" north I don't know except that when I was a kid North and South were "Out", West was "Up" and East was "Down" to say "Up South" was unthinkable and anyone saying this, or "Out East", was regarded as some kind of nut.

"Out North" it was and "Out North" it is - a pretty little stream even in these days of irrigation, you may pass it without realizing that in the eyes of kids 40 years ago it ranked with the great rivers of Canada, majestic as the St. Lawrence, mighty in flood as the Niagara, and containing in its depths creatures of surpassing beauty and curiosity. Doubtless the grown-ups of the day were blind to the creek's qualities but I assure you that they were quite apparent to the kids and any youngster who was worth two pumpkins knew the "Crick" like the back of his hand. In fact the "crick" ruled our lives and we ruled the "crick". It was a friendly arrangement.

Geographically speaking we divided the "crick" into several parts, each named for the man who owned the property through which the stream flowed. Our particular beat was limited by the length of our legs and the variety

of pleasures offered. Our Western limit was "Sheapheard's" flats, good for fishing but without a swimming hole of any kind. Noxi wat. Wiiiidnii where our aunts took us for picnics and sat in the water in house dresses. Women (and particularly "aunts") never swam in those days nor did they wear the fancy bathing costumes of the comic strips. No, they got into house dresses and running shoes, put on a garden hat and sat down in the water. They never swam, paddled or splashed. They just sat there looking pleased and telling us not to scare the cows or throw sand. Then after a time they would slosh into the bushes to appear, in due course, clad in an entirely new outfit of a house dress, running shoes and garden hat. Where this new outfit came from, I never knew. Then, spreading a tablecloth among the milkweed and the cow pads we would dine like princes on salmon sandwiches, raisin scones and,raspberry vinegar.

Down "crick" from "Williams" was "Bakers" and this was our real stamping grounds for not only did it have fishing and swimming but also there were places where we could act out the scenes that occurred in our imagination. Imagination played a great part in our lives as the time was 1922 and every boy's mind was filled with stories of the recent World War. Moreover, 1922 was the heyday of boys serial books such as "The Boy Allies", "Tom Swift", "Bob Hanson - First Class Scout", "Bobby Blake", etc. in which boys ex-

perienced outlandish adventures, overcame evil and attained success through clean living and expressions such as Bless.

Yes, 40 years ago we were absorbed with imagining that we were one of our serial book characters. We did not realize, of course, due to our inexperience with psychoanalysis, that we were really hating our uncle Ewart when we pretended to be "Tom Swift" or "Turn Turn the Jolly Elephant". We were having too much fun to understand that we were really unhappy, mixed-up, psychopaths with built-in frustrations.

Play-acting of this sort needed a suitable setting such as the "crick" and during the long summer holidays we would trot off day after day through the fields; not as you, me, or the other fellow, but as "The Boy Scouts of the Air" or "The Boy Allies". As we went along through the clover our khaki knickerbockers and blue jerseys were transformed magically into uniforms or hunting costumes while our running shoes became riding boots caked with the mud of Vimy Ridge. Thus attired we would burst through the butternut trees into our world of the "crick" and slay the milkweed with our sword-sticks. In other roles we would creep up to the rail fences and snipe at the mid-eyed cows who never realized that they were really a squadron of Uhlans.

Several parts of "Bakers" flats were ideally suited for our games. In particular, the old dry mill race served our purposes.

From time to time, it was the moat of a castle, the sunken road at Waterloo or San Juan hill. Then we would charge in and out of it, firing Tom Swift's "Electric Air Rifle" yelling "bang" or "Row" and sprawling in the heroic postures we assumed sol-diers took when struck down by a "Revolving Dynamite Slinger", that forerunner of the atomic bomb. At other time_sin more peaceful moods, we would roll down the grassy slopes and pick buttercups where the water had been. Nearby was a thorn-apple thicket where we "swang" on grape vines NkeTarzan, built houses or helped "the Boy Allies" with the Prussian Guard.

Just to the west was "the Dam". It wasn't a dam then but one had been there years before, nothing remained in 1922 but a deep, sandy pool of clear rushing water, several big hunks of concrete and a crumbling sluice gate. Here we experimented and learned many useful things such as "Belly Floppers", standing on our heads in water, diving for stones in a handkerchief and walking on the bottom carrying a big rock. We made up rules as we went along in accordance with the particular book we were reading. Most rules were simple. The only real sin was to bang stones together under water. This was a serious crime as everyone knew that this sound would deafen you permanently, split your skull or render you impotent.

We loaded many things at the "Dam" and saw many wonderous sights; chief of which was the vision of one of our fathers entering the water in cotton, balbriggan drawers and swimming a sedate side-stroke. This was deemed to be a real rarity as most grown-ups never went swimming in 1922, or owned a bathing suit.

The "Island" was part of "Baker's" flats and it was our own discovery - or so we fancied it to be. We were certain that no one had noticed that the "crick" divided at a certain place and formed an island. We kept this fact a secret, wading over furtively to carve "Pals Forever" on the Beachnut trees and to build brush huts where we vowed to live out our days as "Fearless Hunters". The "island" was good for imagining things for no adult could show up suddenly and ask silly questions.

Our other stage setting was "The Red Bridge" which was called "The Red Bridge" because it was made of red painted wood with loose floor boards that rumbled majestically when a wagon went over. Along the top were strips of tin on which the capers of our forebears were portrayed in pornographic verse and pictures. This was the Kinsey Report of our day and we crawled along the burning tin wondering what the words meant, under the bridge were iron rods on which we learned to "turn ourselves inside out". When a horse and rig passed over the bridge showers of gravel, etc. would descend through the cracks. There was a good swimming hole at the "Bridge" arid "The Dead Man's Float".

We spent most of each summer day at the "crick" going down each morning as soon as the dew was off the grass and trotting home at noon summoned by the faint chimes of the post office clock. In the afternoons we returned as soon as "our stomachs had settled" and sometimes we even went back in the evening.

I returned to the "crick" a few years ago after an absence of many years. As I went along I noticed that the old paths were blocked with trees. In vain did I look for fence-rail bridges to the "Island". The big swimming hole was silted up and there were no rafts or diving boards. The thorn thickets where we had fought the "Prussian Guard" were the abode of rabbits and the haunts of the "Fearless Hunters" were bramble patches. There were no tree houses and the "scrambly" places where kids had "rassled" were no more. Everything looked as if the "crick" had beaten the kids. However things began to look up when I noticed afar off two childish figures approaching along the edge of the field. Obviously "The Boy Allies" were returning to the fray. As they drew closer I became aware of the fact that one of the children was a girl and that the two were holding hands. Then I knew that these were not "The Boy Allies". Then the sound of music was heard and the hard fact was clear that this a little boy and girl holding hands and carrying a portable radio.

I turned away with the realization that "The Boy Attier" home for dinner on that summer day of long ago would not be coming back. 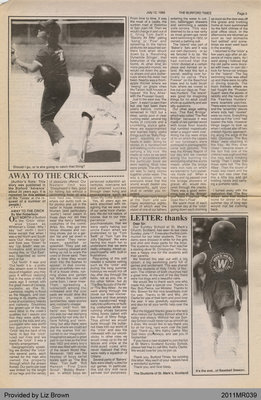