Creator
Robertson, Mel, Author
Media Type
Text
Item Type
Articles
Description
From the 1970s through the 1980s, Mel Robertson wrote many articles for the Burford Advance and Burford Times on the history of Burford Township. This clipping contains the article "Arbor Day - 1923" describing the celebration of Arbor Day in 1923. The article may not have been republished.

The recent well-organized "Arbor Day" at Burford Public Schools brings to mind the rather disorganized "Arbor Days" of the 1920s. They were disorganized because few children knew what the word "Arbor" meant and what one was expected to do on an "Arbor Day". To those children who read books, or had books read to them, an "Arbor" was a little resting place made of tree branches where children could play or where knights and "fair ladies" rested and "Dallied" (whatever that meant). Others thought that "Arbor" was a verb meaning to clean up some sort of mess. Our English friends told us that an "Arbor" was a place where boats anchored like Hamilton arbor or someplace over come. It was all rather confusing. The only clear part was that when Burford Public School held an "Arbor" day it

meant a day free from studies and classes.

There was never any regular day set aside in the 1920s for "Arbor" day. It seemed to be a spur-of-the-moment thing inspired, I suspect, by the care-taker Sam Smye going to the principal and saying that since he had got a bit behind in his work it would be nice to have an "Arbor Day" to get the school and the grounds cleaned up. So on some nice Spring morning Mr. Field, Mr. Macdonald, or Miss Kendrick, or whoever was principal, would announce at our morning parade that next day would be "Arbor Day" and that boys should bring rakes, shovels and wagons and girls should bring dust cloths. This meant that the boys would fulfill the masculine role of doing the outdoor cleaning while the girls would look after the female role of indoor housekeeping. No one though about traditional "role-playing" and any boy or girl who tried to join the opposite sex-group was jeered from all sides.

When the next day dawned the little hill on Maple Ave. North vibrated to the sound of iron-shod coaster-wagon wheels as children hastened to school with their wagons, rakes and shovels. The morning parade with its prayers and National anthem was cancelled as teams of boys and girls were formed to do the necessary cleaning.

Before the teams set to work it may be interesting to describe the work place for the 1923 Maple Ave. Public School was much different from the present lay-out.

Burford Public School in 1923 was a T-shaped white brick building that occupied the southern part of the present lot. There were two rooms at the front plus one behind and a wooden temporary class-room to the south.

in the centre was a large hall and behind the east room was a small room that had been designated as a "science room" but in 1923 was used mainly as a place where the principal made soup for the rural students and where the books of the defunct Public Library were stored. Classrooms had very high ceilings with windows that were well above the heads of students. In each room a 10-foot partition along one wall enclosed a "cloak room" where children hung their coats and where they were taken to be strapped or to have their heads examined for "nits". The central hall was a rainy-day play place and a twice-a-day parade square. Here classes were assembled at 9 a.m. and 1:30 p.m. to sing the National Anthem or other patriotic songs, to recite prayers and to hear windy threats form the principal. At the north and south were separate entrances for boys and girls. Outside the segregation of boys and girls was even more pronounced. To the north was the boys' playground which consisted of a stony ball diamond and an abandoned tennis court. To the south, and separated by a high board fence, was the girls' playground which was relatively small and mostly grass. At the end of the high board fence was a building that housed a woodshed and the toilet facilities. The expression "toilet facilities" is much too dignified an expression to describe those awful, unsanitary, hovels which no one entered unless they were in dire need or felt like adding to the graffiti on the walls. Behind the school was "the Big Field" which extended as far as the Anglican church yard. This contained a couple of segregated ball diamonds and the school dump. At

the east boundary was a row of quaking aspens where the more precocious boys and girls went to be precocious. This was the stage on which 1923 public school students acted out their version of "Arbor Day".

No one started work until the principal gave a signal and then every team began to rake and shovel with enthusiasm. As wagons were filled with trash it became a contest to see which team could deliver the first load to the dump. Then there was racing and pushing until the road to the dump was covered with trash that had fallen from racing wagons.

The highlight of the work was reached when the ash-piles were cleared. These were formidable heaps for not only were there two coal-fired furnaces in the basement but also each class-room had a wood-burning stove. Thus large ash-heaps accumulated during the winter and as they were dug out quantities of unmelted winter snow were revealed. Then snow-ball fights erupted with wet, ash-filled, snow adding to the general mess.

Inside the school the same spirit of competition prevailed with teams of girls contending to see which could clean a row of desks first. Girls ran to the pump and fought to get pails filled with water and there were violent confrontations in the hall over the use of the only step-ladder.

As the morning wore on, things became noisier and more frantic but as noon approached whispers would begin to be heard "Are we going to the creek this afternoon?"

Going to the creek after "Arbor Day" was the usual treat children received for being good workers. This wasn't really a treat for those of us who spent our

summers at the creek but there was a certain fascination about going there in a school group. Part of the fascination was having -an afternoon free from school work and part was the hope that our rather severe teachers would relax for a few hours and show us that they were really human. This may sound strange to 1989 students but in 1923 most teachers were formidable people. Male principals always Effected the dark buttoned-up suit, stiff collars and gold watches with heavy chains, many were adept at on-the-spot corporal punishment and dealt out slaps, blows with wooden pointers and hurled chalk knowing that they would never be charged with assault. One particular sadist at B.P.S. bragged in September that he intended to strap everyone in the school (including girls) before Christmas - and he did! Female teachers tended to be remote disciplinarians, some of whom wore pinch-nose glasses with black ribbons. Students often wondered if these examples of divine rectitude were capable of relaxation and we hoped that a trip to the creek might reveal their human traits. However, we were usually disappointed for the principal never accompanied us and the teachers who did remained as remote as they were in class.

A hike to the creek was always a merry one with the girls brightening the path with round songs such as "Row, Row, Row, your boat", etc. Ar ITO creek the girls gathered flowers while the boys skipped stones. Everything was left to chance with the afternoon's activities lasting until someone fell full-length into the creek or into a cow-pat. Then we plodded home with much less enthusiasm than when we had set out. "Arbor Day" was over for another year.

At this point in the story I suppose that some people will expect me to say that 1923 "Arbor Days" were superior to those of 1989. However, quite to the contrary. In 1989 children do useful things such as planting trees which will improve the environment for years to come, in 1923 students were just clean-up suckers who did a job that the caretaker was being paid to do. Sure we were conned into cleaning up a few messy places but we did nothing of permanent value. The only thing we learned from a 1923 "Arbor Day" was not to let temporary enthusiasm success into doing something stupid.

Looking back over the 66 years that have passed since the 1923 "Arbor Day I can see nothing on the Avenue Public school grounds that reminds me of our "Arbor Day" efforts. However, when a 1989 student looks back in JD49, he or she will be able to touch a large tree and say, "I helped to plant that tree". 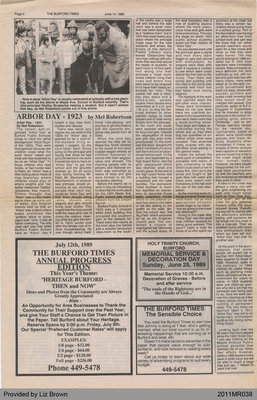