Creator
Robertson, Mel, Author
Media Type
Text
Item Type
Articles
Description
From the 1970s through the 1980s, Mel Robertson wrote many articles for the Burford Advance and Burford Times on the history of Burford Township. This clipping contains the article "The Maple Leaf Forever" describing the history of this patriotic song that was sung at Burford Public School in the 1920s. The article may not have been republished.

Once again the Maple leaf, "Our emblem dear, has completed its cycle. In the spring its tender green brightened our lives after a dreary winter. During the summer we rested in its shade. In autumn we admired its various colour but now that it is withered and fallen, it, like other old things, had become a nuisance that must be discarded as soon as possible. Leaves, like people, come and go, some brightening the lives of others and some leaving a stain but not a mark. So before all the leaves have turned to ashes or mulch, let us examine the numerous types and uses of the maple tree and its leaves.

In the 1920s the patriotic song "The Maple Leaf Forever" was sung every morning at Burford Public School as part of the morning ritual when students lined up in the hall by classes. A portion of Holy Scripture would be read and then everyone repeated the Lord's Prayer, the 23rd Psalm or some other portion of the beautiful Scriptural writing. Then we came to attention and marched to our classes with feet stamping on the floor so hard that everything rattled. If one of the girls, like Jean Thomas, was there to play a march on the piano we stamped so hard that the Principal John Macdonald would shout and rage warning us to "take a hint" or he would strap us all.

"The Maple Leaf was not a national anthem but since it was a belligerent song like "We'll Never Let the Old Flag Fall we treated it with reverence. It recalled British victories at Quebec and Lundy's Lane and contained a line "And those dear rights that they maintained, We swear to yield them never.' This line caused problems with us "Little Red Hen1 students for the word "rights" meant nothing to us. Since we had no "rights' we couldn't understand the word especially since it was accompanied by the word "dear". We did know the word "wives" from overhearing parental conversation. Thus we stood at rigid attention singing 'And those dear wives that they maintained, We swear to yield them never1. Since no one straightened us out we grew up with a rather pluralistic view of pioneer life.

The Maple Leaf is not sung in schools anymore for its reference to Wolfe our dauntless hero is thought to show racial bigotry and boasting about Queenston Heights and Lundyls Lane is considered to be Anti-American. However, I do not think that the fact we sang this song made us bigots Most of us thought that history was something that may, or may not. have happened to someone else, somewhere else, at some other time - sort of a pre-TV Star Wars thing. We enjoyed stories about our ancestors but didn't look down on our American or Quebec friends just because Wolfe or Brock had beaten their folks away back in time.

Children of the 1920s became acquainted with the maple leaf early in their school life for the first Art" project each fall was to bring a maple leaf to school and make a copy of it. Water colours and crayons were used to create realism and some weird and wonderful leaves were produced. Creating a maple leaf in an "Art" class was not as easy as it may sound. Tracing was out and teachers always insisted that both sides of the leaf be identical; a thing not found in nature. Other maple leaf projects were contests for the largest leaf, the smallest leaf, the most colourful leaf, etc., etc. Indeed, we brought so many leaves to school each autumn that we looked like the Green Berets going into action.

In the days before traffic was so heavy that smoke could impede its progress everyone burned his own leaves and on any bright autumn day many columns of smoke could be seen rising from the village. No one worried about the environmental problems that the smoke might be causing because no one had heard the word "environmental" and "pollution" was something you smelled only when you passed the local pig ranch. In total ignorance, people stood around their little fires, day-dreaming, coughing and pushing errant leaves back into the fire. Little did these fire-watchers realize that they were reenacting a ritual practiced by their skin-clad ancestors who stood around their fires pushing back human sacrifices who objected to what I suppose would be described in our multiword society as "A pre-termination-of-all-vital-forces culinary process."

The burning of leaves could cause religious conflict and I can remember the indignation that arose when a local professional man burned his leaves on a Sunday. In a community where merchants drew their window blinds on Sunday and children were chastised if they went swimming, this was considered to be a grave act of sacrilege. Men rushed out of doors to investigate and my father told me that several hastened to the sinner's home to warn him that his action could have a damning effect on his future hope of salvation. Some even suggested that the fires he would be tending "later on" would not consist of maple leaves.

Another 1920s autumn ritual for children was the building of leaf houses which, unless you had a fence corner to work on were not houses in any sense of the word. Most were merely outlines of houses without roofs. The building of leaf houses was always accompanied by a bit of deceit on the part of parents for they knew that by saying "Why don't you build a leaf house?" the children would rake all the leaves into a pile that could be burned later.

Leaf houses were ephemeral things; useful for a few hours play. If left overnight they became damp and full of bugs. However, they seemed to attract "aunts" with bags of cookies who would gather children on top of the pile of leaves that passed for a house and regale them with Made-on-the-spot stories. These were always about little people who lived in the tree-tops and who travelled about on the falling leaves. Some of these were so vivid and well-told that children would squirm about wondering if they were sitting on "Uncle Fred" or if the prickly feeling of the dry leaves meant that someone was trying to get out.

Apart from the shortlived leaf houses and the little story-telling parties they engendered, leaves were not good playthings. They couldn't be eaten. They couldn't be thrown in a ball and they wouldn't stay in one place. Nonetheless, at a time when the minds of children were taken up with a simple, nonelectronic, fairy-tale world, dead leaves had a

mystic aura about them. Children were fascinated by the sound of dry leaves being driven by a late-night wind "like ghosts from an enchanter fleeing", as Shelley put it. This was an eerie sound particularly if the leaves happened to be blown against a bedroom window, our childish imagination was stirred by such sounds but we knew that nothing really bad could come from something so friendly as a maple leaf.

Maple trees have been plentiful in Burford Township from the earliest times and in Col. W. Bowen's 1817 report on area resources they are noted as first among several species of tree. This prominence was probably due to the fact that the sugar maple was the source of the sweetener that added so much to pioneer cooking and that sugaring-off parties were so much fun. Maple sugar was a prized commodity and when Gen. McArthur's

American raiders passed through Burford on the morning of Nov. 5, 1814 they seized large quantities of it. Some idea of the amount of maple sugar that was available was the fact that even after several months consumption, Henry Lester still had 400 pounds confiscated

Books like the readers' Digest North American Wildlife list the following types of maple for this part of the country - the sugar maple, the Norway maple, the red maple, the silver maple (or cut-leaf maple), the striped maple and the ash leaf maple. There is also the despised Manitoba maple which may not be a maple. The maples that are listed produce leaves which are form four to six inches in width. However. I have in my backyard, a maple tree that produces leaves that are from eight to 10 inches in width. We have always called this the 'big leaf maple" but since the "big leaf or "Oregon" maple is only found in Oregon I must conclude that my tree is merely an unusual specimen of one of the maples mentioned above.

There is, of course, one type of Maple Leaf that is not mentioned. 1t appears every Fall, flourishes briefly and then falls before winter has really set in. It is blue and white in colour and is found in Toronto. It is called many unprintable things. I refer to the Toronto Maple Leafs which are grammatically incorrect and athletically inept. Thank goodness they are not our "Emblem dear"!

How does something become an "emblem dear"? Most countries have an animal, a tree, a fish or a plant. For example, England has the rose, the lion and the bulldog. The rose is beautiful but its thorns keep you at a distance. The lion is majestic and looks down its nose at all other animals. The bulldog symbolizes the grim determination of the

ordinary British soldier who helped Britain gain an empire. (If a symbol had been chosen to represent the British general it would have been the dodo.)

France has the lily (the flower of the virgin Mary) and the rooster cock. The Americans, the Germans, the Austrians and the Poles have the eagle. The Russians have the bear. In Canada our animal symbols are the beaver - a stupid, industrious animal with the idiotic desire to ruin the environment; the moose whose intellectual attainments led it to charge locomotive headlights; and the loon whose claims to fame are its secretiveness and its ability to scream. Sure Canadians have more sense than to admire these animals!

That leaves us with the maple leaf. How was it decided that this would be our "emblem dear"? Did someone say. 1 move that the oak leaf be our emblem dear", only to have someone say, "No, the British have the song "Hearts of Oak" already"? Did others suggest the

pine, the walnut, the willow, the hickory, or the basswood? Did someone even suggest the pisselm? (Don't gasp, it's a legitimate name for the stately elm.) Were these rejected as un-Canadian or because they would sound silly in a patriotic song?

Can you imagine anyone leaping to attention or rushing to war in defence of "The Pisselm our emblem dear"?

So we have the maple leaf - short-lived, pretty to look at, a nuisance when it is dead and of more value when it is rotten than when it is alive. Is there any Canadian symbolism in this? Let's hope not! Let us rather think of the maple tree as the pretty producer of maple sugar and not try to work any silly patriotic fervor into it. Let us enjoy its promise of Spring, appreciate its shade in summer and admire its colours in Autumn.

If a song about maple leaves is necessary let someone write one in praise of the labour-saving devices that help us get rid of them. 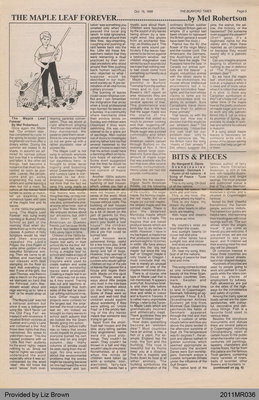