Creator
Robertson, Mel, Author
Media Type
Text
Item Type
Articles
Description
From the 1970s through the 1980s, Mel Robertson wrote many articles for the Burford Advance and Burford Times on the history of Burford Township. This clipping contains the article "Penny Christmas Cards". The article may not have been republished.

WHEN WE think of Christmas & New Years cards today we tend to think of beautiful folding cards in exquisitely-lined envelopes bearing a seasonal message in flawless script. Cost per card when purchased separately is over $1 and postal charges are at least 37 cents. However, 80 or 90 years ago these greeting cards were mostly penny post-cards that could be sent anywhere in Canada for one cent or to the United States for two cents.

My recent acquisition of a rather large collection of Penny Christmas & New Years cards reveals a number of interesting things.

It is understood that the first Christmas & New Years cards were produced in about 1843. I have one of these early cards and apart from a small inscription it does not bear any of the accepted Christmas symbols and doelPresemble a modern card in any way. It is large, stiff and heavily edged with red fringe. It displays a fancy plate, an earthenware pitcher and a bunch of flowers. It can be opened with some difficulty revealing more unseasonable plates, pitchers and droopy flowers. It can be imagined that the cost of such a card would be well beyond the means of ordinary people. Other unseasonable greeting cards were the engraved cards such as those of Mr. & Mrs. Ronald of Paisley, Scotland and Capt. & Mrs. Dalziel of 8 Percy St., Glasgow which in 1890 extended stiff formal greetings engraved in gold on calling cards. Cards of this nature always bore a coat of arms if one was available, or a hunting scene. They give the impression that the senders viewed Christmas as an extremely serious season.

As the years passed

greeting cards became less formal and more seasonable. Symbols such as the holly and mistletoe that had been introduced in 1848 became entwined with English robins and country lanes. However, things that we would consider to be unseasonable continued. For example, in 1890 there is a daisy-covered Christmas card that declares "I weigh my friends' affection with my own thus leaving the recipient wondering what the verse meant and what was being celebrated. Even as late as 1905 there is a Christmas card on which violets are so plentiful that the verse is almost hidden.

It is not known when the penny Christmas card was introduced but it was a natural outcrop of the "rage" for post-cards that flourished in the late 1890s. The most prolific of card printers seems to have been Raphael Tuck & Sons of England, "Art Producers for the Royal Family." Tuck produced many series of Christmas post-cards such as Series 509 "Winter Glories", Series 510 "Hoar Frost and Winter Snow", Series 515 "Christmas Carols" which included parts of well known carols such as "Sing 0 Sing this blessed morn, Unto Us a Child is born", Series 525 - "Santa Claus & Scrolls", and the "Artistic Series" which used verses by "famous poets" - "Neath this roof with thee and thine. May Content and Gladness dwell. And each hope's fulfillment be. Rung by every Christmas bell". The "Oilette Series" of 1923 was outstanding in its reproduction of well known oil paintings, while Series 600 and 606 were devoted to New Years cards.

Tuck's cards were all produced with consummate skill and it was a common thing, at the time,

to frame them and hang them on the wall. The most unusual Tuck series of cards was No. 3, the "Express Series". This group of full colour cards featured British express trains and locomotives. They were very popular with young boys and although they had little to say; about Christmas they a great deal to say about the dimensions of locomotives, their builders, their propulsion machinery and the trains they drew.

New Years penny post cards displayed horseshoes, shamrocks, four-leaf clovers, wishbones, daisies and violets. Many were so full of Irish symbols of good luck that apart from a small New Years greeting they could have been used for St. Patrick's Day. Indeed, one gets the impression that the printer kept a stock of blank cards and merely added the greeting appropriate to the holiday being celebrated.

Penny Christmas cards that were printed in countries other than England or Germany had few of the traditional Christmas decorations. For example, my Italian-printed Christmas cards show men in medieval romper-suits strumming on lutes with one hand and eating artichokes with the other (you people who play guitars will tell me that is impossible and will agree with you). Other Italian-printed cards display nngets with funny faces knocking out hot licks on bugles and children dressed as animals and animals dressed as children. These cards, as well as other cards from postal union countries, have instructions tor use in several languages, including Russian. This was highly informative but left little space for anything else.

When photography became popular in the early 1900s many card companies began to produce greeting cards by the rotary press method. The popularity of

photographic cards coincided with the popularity of snowshoe clubs. These clubs, like the bicycle clubs, were rather military-like in their activities. Thus the card*, showed large numbers of men and women all clad in Hud-sons Bay coats and toques conducting precision drills to the orders of a frost-bitten bugler.

An outstanding exception to the grim snowshoe-club Christmas cards were the photographic cards produced by Sted-man Brothers of Brantford in 1910 which show people on sleighs who seem to be enjoying themselves. However, generally speaking, the photographic cards were never able to compete with the artificial cards for, try as they might, photographers were never able to catch the happiness of Christmas. In their efforts to show how much they

were in touch with the times, photographers frequently obscured their pictures of unsmiling families in Hudson Bay coats with large "Merry Christmas" signs and notices telling the world that "This card was produced in the United States by the Rotary Press method."

An examination of the messages on the backs of penny Christmas cards reveals that they were not reserved for the sending of Seasonal Greetings but were used, when available, for a variety of messages that had little to do with the season. Several of my old cards bear messages such as one from Norwich to my Mother in 1904 "I will be down on the 5 o'clock train" and another from Brantford, reading "I will be up on the 11 o'clock train". Yet another to someone else reads "Send us some butter as soon as you can and some grain and come over and eat." Other notes are "Come over. We have a new car. Do you want a ride?" Another also in 1905 reads "I am very lucky. I can get a car ride almost everyday.1 In 1910 someone wrote "Chickens can be had for 20 cents, turkeys cost 23 cents a pound so we won't have much turkey this year." A

humourous note to Nell Shaw in 1910 says "Do you have a tree to roost in this year?" One of the most cryptic notes on a Christmas post-card came form a Methodist minister in Michigan in 1911. He wrote "We have had a bathroom installed. Now i can give my wife a bath for Christmas." This clergyman, who was born near Burford, was known all over Michigan for his humourous sermons. One has to speculate, if the post-office people in his little town read this card, what they thought of it?

If may seem strange in 1988 that penny Christmas cards were used to convey such unseasonable and trivial comments but we must remember that in the early 1900s telephones were scarce and unreliable whereas postal service was good. Consequently, when people wanted to send a message that would go by phone in 1988, they grabbed a penny post-card. It did not matter if the post-cards showed Mohawk Park, a morgue in Peoria, Illinois or Santa Claus, people who were in a hurry grabbed them and sent them off not worrying too much if it was December or May.

Any discussion of early

Christmas greeting cards would be incomplete without a reference to the home-made cards, bookmarkers and menus that every school child had to produce ip the 1920s as part of their "Art" training. I have two of these homemade greeting things. Both are book-marks made in Burford Public School around 1922. One shows a little candle with the verse "This little candle burning bright. Will Keep your place from morn til night." The other has a winter scene and the words "Little book-mark thee I send. With Christmas greetings to my friend. Be my messenger indeed. Every time my friend shall read." One has a red ribbon woven into it and this must have taken the eight year old girl some time to accomplish. Since every child who attended Burford Public School in the 1920s was obliged to make these cards e-book-marks I imagine that there are still a few in dusty attics.

Times and Christmas cards change. Messages vary from the ridiculous to the ultra-religious but through it all shines the friendly light of Christmas and the joy of the Christmas message. May it always be so. 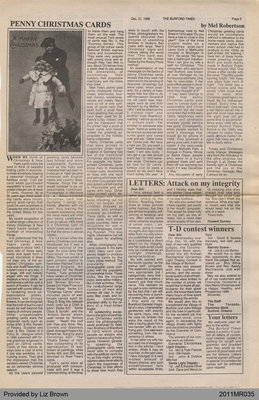