Creator
Robertson, Mel, Author
Media Type
Text
Item Type
Articles
Description
From the 1970s through the 1980s, Mel Robertson wrote many articles for the Burford Advance and Burford Times on the history of Burford Township. This clipping contains the article Remembering the Old School Fairs. The article may not have been republished.

Now that Autumn is here again and Fall Fairs are flourishing on all sides it may be interesting to recall the School Fairs that were held in this area some 60 years ago. Many older people will remember the annual School Fair as the brightest part of the autumn school term and as a time when they could display their creative ability. Now thanks to information obtained from the Public Archives I can go into the history of these fairs.

School Fairs began in the spring of 1906 when F.C. Hart the Waterloo County Ag. Rep. and his assistant R.S. Duncan distributed bags of seed in three rural schools. Children were asked to plant the seed and then have the Ag. Rep. examine the growth and advise them on the best methods of cultivation. In the fall of 1906 a small fair was held at Riverside Public School on the West River Road near Gait. This was not a fair in the accepted sense but rather an assembly where children and their parents gathered to view the material that had been grown and hear the experts give their reasons for awarding prizes.

This experimental fair was so successful that in the following year all the rural public schools in North Dumfries were included. A system of yearly fair rotation was worked out and lunches were arranged. A tent 30 ft. wide, 50 ft. long and six ft. high was purchased and local farmers with O.A.C. education were obtained as judges, and local Women's Institutes were solicited to provide lunches.

From this simple beginning the School Fair movement went forward in leaps and bounds with many new competitions being offered such as first aid, cattle judging, domestic science, physical exercises, singing, drill marching, stock naming and the judging of fruit, vegetables and poultry. Great emphasis was placed on teaching proper methods of judging as it was felt at the time that there were no standards for judging at

Fall Fairs. This deficiency had been recognized in the Burford area in the classes on livestock judging that had been initiated by such internationally known experts as Joe Brethour, J. Lloyd-Jones and Frank Lewis.

The popularity of School Fairs can be judged by the 1928 statistics put out by the Department of Education which indicated that there had been 560 fairs, 4,859 cooperating schools, 162,199 school gardens, 373,371 fair entries, 158,811 children and 201,046 adults attending the fairs. Since there were about 300,000 children attending Ontario public schools at the time the presence of one third of the school population the the fairs was a good indication of their popularity.

School plots, or gardens, were an early feature of the School Fair movement as it was felt that the growing and cultivation of vegetables and flowers should be as close to the classroom as possible. Consequently small gardens were set aside in the corner of play grounds. Teachers were encouraged to become proficient in agriculture and grants of $30 a year were given to teachers who had passed the three-month agriculture class at O.A.C. At Burford Public School in the early 1920s, principals J. MacDonald and J. Field were active in forming a school garden at the southwest corner of the maple Ave. School. This flourished for a number of years but with the departure of Mr. Mac-Donald it was allowed to go to seed. Some idea of the popularity of school gardens can be gained from the 1920 Department of Education report which lists 522 in the province.

School Fair Day was very popular in rural Ontario public schools and 1934 the Report of the Department of Education described it as follows: "School Fair Day is one of the highlights of the year for rural boys and girls. From early morning until 4 o'clock a program of competitions and demonstrations make the day a busy and interesting one. In addition to making the

awards, the official judges explain the reasons why and thus value at all times is kept to the front. While the Ag. Reps, are the managers of these events they are at all times ably assisted by the Public School Inspectors and teachers."

As the years went by interest in separate School Fairs waned in Southern Ontario where their activities began to be integrated into the regular Fall Fairs. However, in Northern Ontario they continued unabated. I do not know if these fairs continue. The last report that I can find in the Department of Education reports is in 1953 when 236 schools had held fairs and 1,817 schools and their pupils, individually, had sent exhibits to local Fall Fairs.

As a pupil in Burford Public School in the 1920s I can recall the great interest that was generated by the School Fair. This was begun in the Spring when lists of available seeds and plants were received at the school and pupils were asked to select things they wished to grow. Each item was available in limited quantities and it was 'first come first served." One year everyone wanted to grow Irish Cobbler potatoes. I had won a prize with them the previous year and was very disappointed when I had to settle for Green Mountain.

Fairs were held at different schools each year and in most cases the Bur-ford Board supplied transportation in the form of a vehicles called an Reo Speedwagon. This was a truck with a covered box and wire sides. Benches were put in for seats and even though we looked like animals in a zoo, we traveled in reasonable comfort. One year the Fair was at Fairfield School and no transportation was provided. Since I did not have a bicycle I decided to ride on the cross-bar of a friend's bike. I arrive in Fairfield with a horizontal crease of magnificent proportions on my backside and the determination never to be so foolish again. Then to cap it all, it rained all day and we spent our time sitting in the wood-shed. Fortunately, someone | provided transportation< back to Burford.

The main interest every year was the drill competition. This consisted of various marching patterns plus a yell and a patriotic song. For some reason we were expected to march bringing our knees up waist high and stomping down hard on the earth -sort of a "Knees Up Mother Brown" step. I never knew why this was expected at Burford Public School when it was not done at other schools. Everything was done in silence and without music, or anything else, to keep us in step. Oakhill School always won this competition. They achieved better precisions by having their leader bawl out orders like a Marine drill sergeant.

One year Burford was determined to win the competition and we practiced hard every day. We drilled in two lines - one of girls and one of boys. The leader of each line had to memorize all the moves and the rest would follow. The leader of the boys' line was the son of the Baptist minister and during all the practices he led us without a slip. I was second in line and since I merely followed the leader i did not concentrate on the moves we had to make. The School Fair was at the Burford Fair Grounds and there were several hundreds in the stand. We were all ready to take the field when it was discovered that the leader of the boys' line had disappeared. He was sought out but had developed cold feet and refused to take part. Therefore I was left to lead the boys' line. We got through the drill alright but of the few tight corners I have been in during my life, this was probably the tightest. We didn't win the competition and if the boy concerned is still alive I want him to know that I still think it was a pretty rotten trick.

The main center of attraction at a School Fair was the 30 x 50 tent which, in a small school yard such as Oakhill, completely dominated everything. Exhibitors had to have their entries in the tent by 10 o'clock. After that the judges retired into the tent, the entrance was tied up and children waited breathlessly until 4 o'clock when the tent was opened and everyone rushed in to see if their entries had won prizes. W,e never knew who put of the tent, tor apart from the energetic Mr. R. Schuyler, the agricultural representative, and a few women from the Institute, there were no men around to do the heavy work. We just assumed, in our ignorance, that Mr. Schuyler had done it all himself. Indeed, I cannot imagine that any local School fair could have succeeded without the endless and untiring work of Mr. Schuyler, who, during the whole day seemed to be everywhere at once, organizing, advising and settling arguments. Mr. Schuyler was the heart and soul of local School Fairs and I hope that somewhere along the line he got credit for his work and for the inspiration he gave.

In the beginning almost all the work of School Fairs fell on the shoulders of the local Ag Reps although in some places they received help from interested School Inspectors and teachers with qualifications, or interest, in agriculture. However, in May 1932 the Department of Education issued instructions asking School Inspectors to cooperate more closely with district Ag Reps. There was an im-mediate and wholehearted response and a plan was set up whereby

Inspectors and Ag Reps would meet each Spring :o arrange the program for their area School fair. A division of duties and responsibilities was arranged and the fairs were placed on a more businesslike basis with regular meetings between representatives of the Department of Education and the Department of Agriculture to discuss improvements and iron out difficulties. This was a great step forward but one has to wonder, at the same time, if this formalization of what were informal events might have marked the beginning of :he wane in interest for having School Fairs as a distinct separate Fall Fair. In looking back over some of the competitions at School fairs one has to wonder how some would nave been received in 1988. Would such competitions as button-hole making, sock darning and grain-bag patching be assailed by feminist groups as demeaning, role-playing contests that were unfit for girls? Would the simple drills have been condemned by the so-called "Peace Movement" as military training that threatened the peace in Nicaragua? Would left-wing organizations have jeered because prizes were given for the best essay on "Why I am proud to be a Canadian"? Would our vaunted Charter of Rights and Freedoms have been searched by other pressure groups to find, if in some obscure way, the Fairs were infringing on someone's rights and freedoms? Who is to say? For my part I feel that School Fairs gave children a sense of responsibility and a feeling of self-worth at a time when children were expected "to be seen but not heard". The fairs were simple, straightforward and unsophisticated. They did not boggle the minds of children with big words and electronic devices. They taught children respect for the things of nature, the environment and their fellow creatures. As far as I am concerned that says it all. 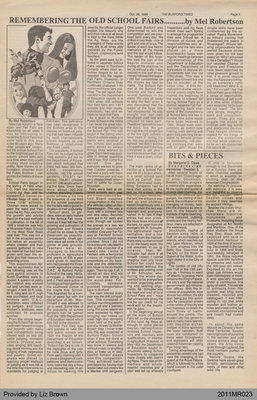