Creator
Robertson, Mel, Author
Media Type
Text
Item Type
Articles
Description
From the 1970s through the 1980s, Mel Robertson wrote many articles for the Burford Advance and Burford Times on the history of Burford Township. This clipping contains the article Dr. Morley Jull – Poultryman to the World. The article may not have been republished.

Did you have bacon and eggs for breakfast this morning? Have you had turkey for Christmas, ham for Easter and chicken either as a roast bird or in the several forms in which it is sold by Col. Sanders, Chicken Villa or other fast-food chicken outlets? If you did and if you enjoyed your meal you can thank a couple of Burford men for your enjoyment. I refer to Dr. Morley Jull and Joe Brethour who probably did more than almost anyone else in the world to improve and promote these products.

Of the two men Joe Brethour is probably the best known locally for he lived a mile south of Burford for most of his life. During that time his skillful breeding of swine added one foot to the length of the Canadian bacon hog and the quality of his product got Canadian bacon on the British market. Throughout the world Joe was known as "Brethour of Burford", However, while the Jull family is well-known locally, Dr. Morley Jull did most of his work in the United States and consequently his name may not be as familiar to the Burford People as that of Joe Brethour.

Morley Allen Jull was born on a farm near Burford on August 26 1885, the son of John Henry Jull and his wife Ann (nee Winskel). Both the Jull and Winskel families were early settlers in this district with John Jull being listed in the Brant County Gazetter of 1861 as residing on Concession 7, Lot 7 and the Winskels on Concession 7 Lot 5 of Burford Township.

Morley Jull's interest in poultry began early in life and seems to stem from an incident that took place one Sunday morning when he was six. On that particular day Morley felt ill and was allowed to stay home from church. When he began to feel better he set out to explore the barnyard where he found a dead hen. Being curious as to what had killed the fowl the young lad went into the house where he got a kitchen knife and cut the bird open. This apparently sparked an interest in poultry that was to absorb Morley Jull all his life.

School began for Morley at the age of five - a rather early age in 1890 when children usually began school at six. However, in the case of Morley Jull, his school enrollment was brought about by the fact that he insisted on following his sister Grace to Mt. Vernon school every morning. Eventually, Morley's persistence induced the teacher to enroll him.

After graduating from local schools, Morley Jull enrolled at Guelph Agricultural College from which he graduated with honors. The O.A.C. "Review" of 1908 had this to say about him - Morley Jull, Burford class more reliable, no member of the class more unobtrusive yet more often in the line of duty that Morley Jull...He never lost his temper and was always willing to look on the other side. As Secretary of his class he performed the drudgery of such a position with light heartedness and even gladness. Though not often a first-class winner in sports, he was a good runner in long runs and he finished just as happy and contented as if he had come in first. His equalness of temper should stand him in good stead in the battles of life as it did in college harum-scarum. He had secured a good position down south in the Poultry line."

The "good position" Morley had secured was at the West Virginia Agricultural Experimental Station where he remained from 1908 to 1909 when he was appointed Poultry Commissioner for the British Columbia Dept. of Agriculture. During his three year tenure of this position Morley Jull organized one of the first egg-laying contests.

In 1912 Morley Jull was appointed head of the Poultry Department of MacDonald College of McGill University. While at MacDonald Morley Jull continued his post-graduate studies and in 1914 accomplished two important things i.e. he was awarded the degree of Master of Science by McGill and published his first paper "Farm Poultry."

During the First World War Morley Jull's academic work was interrupted by military service. He was commissioned as a captain and lectured to officer candidates on military tactics; a field in which his fine analytical mind received fall play.

After the war Morley Jull was granted a leave of absence from McGill and was granted the degree of Doctor of Philosophy in genetics from Wisconsin University.

This was followed in 1923 by his appointment as head of the Poultry Unit at the poultry research centre of the Belts-ville Research facility of the American Government, Bureau of Animal Industry. There Morley Jull laid plans for the development and completion of the largest poultry research centre in the United States and it was there that he developed the breed of turkey known as the "Belts-ville Whites". This was a very important step in the production of the smaller turkey that is so popular on tables today. In addition to his research with turkeys Dr. Jull worked closely with the American Egg Society in the promotion of better eggs and better meat quality in chickens. Dr. Jull's work at Beltsville was recognized by the American Government in his appointment as American representative to the World Poultry Congress in Ottawa for 1927 and again to the London England Congress in 1930.

In the 1930s Dr. Jull added to his laurels in the literary world with two long articles in the prestigious National Geographic Society magazine. These were "The Races of Domestic Fowl" and "Fowls of the Forest and Stream Tamed by Man". In addition Dr. Jull began to publish a series of books which are considered by geneticists and poultry breeders to constitute the "bible" of Poultry and Egg culture for the world.

In 1936 Dr. Jull went to the University of Maryland where he supervised the setting-up of an entirely new department for Poultry research including courses in Poultry Husbandry leading to the degrees of Master of Science and Doctor of Philosophy in Poultry Husbandry. His efforts were crowned by the splendid Poultry building and the magnificent Jull Hall in 1953.

Dr. Jull's skill as an investigator was paralleled by his excellence as a teacher and in 1950 he received top honors for excellence in teaching and in 1952 he gained the Teaching Award of the Poultry Science Association. Other awards included Fellowships in the Poultry Science Association and the American Association for the Advancement of Science. Honors from academic associations included men: scholarship in the Sigma Xi and Phi Kappa societies as well as the American Academy of Science. Dr. Jull's LUX. accomplishments brought him the editorship of the Poultry Section of "Biological Extracts" and a listing in the "Who's Who of American Scientists."

Dr. Jull's work with Maryland University, the World Congress of Poultry and the American Government brought him many invitations from foreign governments to assist them in establishing facilities for the production of better and cheaper eggs and fowl for their people. As a result Dr. Jull traveled extensively and the facilities he designed can be found in many parts of the world. He remained very active in his chosen field until his death on Oct. 25, 1959.

Dr. Jull did not confine all his efforts to the academic side of life. He was an active Rotarian and President of the College Park Rotary Club. On the domestic side he married Marion Louise Monkley in 1930 and fathered a son Morley Allen who graduated from Maryland in 1953.

Dr. Jull's illustrious career was marked by a number of abilities. He was able to work with little more than a brief afternoon nap and it was said by his associates that the "A" in his name stood for "Allwork" and not Allen. He was also noted for the clear and interesting way he was able to lecture his students. His constant goal was to see that the purchaser of eggs of fowl got the highest quality and quantity at the most reasonable price. Dr. Jull's memorial is probably the great broiler industry of today. Among the benefactors of mankind Morley Jull holds a prominent place.

Information concerning Dr. Jull was obtained from the "Processing News of 1953", the University of Maryland publication issued for the dedication of Jull Hall and a number of newspaper clippings including the "Burford Advance". These have been provided to me by Mrs. Ruth Lester (nee Jull) a former resident of Burford. I would like to thank Ruth for her kindness. 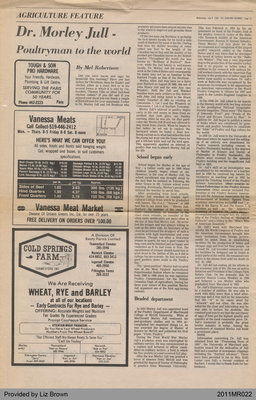