Creators
Robertson, Mel, Author
Maver, Ken
, Author
Media Type
Text
Item Type
Articles
Description
From the 1970s through the 1980s, Mel Robertson wrote many articles for the Burford Advance and Burford Times on the history of Burford Township. This clipping contains the article Remembering When Trains Stopped By... describing the history of the Burford Railway Station in the 1880s. The article may not have been republished.

Remembering when the trains stopped by...,

There was a time not too long ago when the rusty railroad tracks running behind the Burford Fairgrounds were clean and shiny from regular use. Although there is little there now but empty space, the site was the location of a rather busy railroad station with a unique history all its own.

Sometime between November 9, 1875 and March 30, 1876, the Burford Railway Station was built by the Brantford, Norfolk and Port Burwell Railroad. Burford residents relied upon the railroad for transportation to and from Brantford. The train service was not a luxury. It was a necessity. Many of Burford's senior citizens have fond memories of taking the train to attend Brantford Collegiate Institute in Brantford to complete their secondary school education.

At one time in the history of the station, as many as four passenger express trains, in addition to the regular freight traffic, arrived at the station carrying passengers to and from Brantford each day. As more and more people bought automobiles however, passenger traffic slowly declined until the early 1930's when passenger service was discontinued. The station remained open for parcel and telegraph service until the 1950's when it was eventually closed. It remained unused until 1973 when Rev. Gordon Hoult and his wife M. Douglas Hoult bought the station, transported it to St. George and remodelled it into a unique home.

The Hoult's sold the station in September 1981 to Mrs. Janet Elliott. Today the station is nestled in a private hollow alongside Highway 5 on the way to St. George and Mrs. Elliott has converted it into an interesting antique store aptly named, The Station.

A portion of the old Burford train station with its roof already removed. The station was purchased by Rev. Gordon Hoult and his wife M. Douglas Hoult in the fall of 1973. The Hoults moved the station to St. George and converted it into a remarkable home.

The following items were compiled by Burford Historian MEL ROBERTSON.

In the 1860's there was talk of a RR from Brantford to Port Burwell. Burford citizens wanted the RR to go through Bur-ford and tried to get Township Council to pay $40 to the RR company. A vote was held and the proposal was defeated by 90 votes.

In 1868 the Brantford, Norfolk and Port Burwell RR was incorporated. The Canada Southern RR (NYC) and the Great Western RR (now the CNR), chipped in with rails to help the RR get started and work began. The Burford station was completed sometime between November 9, 1875 and March 30, 1876. The completed line was opened on April 1, 1876. A company memo filed in the Public Archives of Canada states the cost of construction for each station was not to exceed $450. 5 In 1876 the first trip from Burford to Brantford was an excursion in open cattle cars with boards for seats. My grandparents were on this trip. One woman lost her hat en route and her husband wouldn't let her go up town in Brantford until he bought her a new one. It was considered immodest in 1876 for a woman to go without a hat in the city.

The station was a centre of community life with people walking down to see the trains come in and talk with people they knew who were on the train. The local hotel provided a coach and there was a freight wagon for the baggage and express parcels.

Two of the biggest events were the annual Sunday School Association excursion which attracted up to 1,200 people from the Burford area, plus hundreds from Harley, New Durham and Mt. Vernon etc. The trip was usually to Niagara Falls or Grimsby Beach. The other big event was the departure each year of the local Cavalry unit for summer camp. Everyone, including the Burford Citizens Band, turned out to see them go. On a smaller scale was the annual Agricultural Society excursion to the Agricultural College in Guelph.

Burford. This continued until the early

1930's when motor cars carried most of the passengers.

In the early days the station platform was level with the passenger cars so passengers could step right in as they do in the Toronto subway and similar RR's.

Some of the early station masters were Mr. P.A. Robertson (no relation), Mr. Wes Meredith, Mr. J. Warren and others.

The RR station was subject to frequent break-ins and robberies. These clearly demonstrated the stupidity of the criminal mind as the—safe which contained no money and was unlocked, was regularly hruled out and blown up for no gain. The last robbery was probably the most stupid as the hold-up men, who were known locally, held up the station master in broad daylight while men were roofing a nearby building. They were recognized immediately, arrested and served time in the penitentiary. The station robberies were so frequent they became a local joke.

The station was divided into four parts-the waiting room, office, express office and the freight shed. The passenger room had the traditional pot- bellied stove in the centre with plywood benches along the two walls. On the east side were two wickets with ornamental bars and glass windows. Apparently in the early days passenger traffic was so heavy two employees were needed to sell the tickets.

The floor level of the office and express room were of normal height but the freight shed was raised so that freight could be unloaded from a rail car with a wooden ramp and car. There were ramps on the platform and at the east side of the station so customers could wheel their goods to their wagons.

Until he 1920's there was an express and freight service from the station to downtown Burford. The service was operated by George Secord and Mr. Hall. In those days commercial travellers or Drummers travelled by train and took large sample trunks of their wares to show to local merchants. The local express wagon took their trunks to the Cornish House (at the corner of King and Maple) and displays were set up for merchants to examine and place orders. 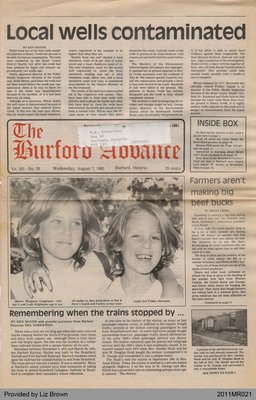