Home (Advanced) → What's New → Details
Back is a 4-letter Word by Mel Robertson, from The Burford Times
Description
Comments (0)

Creator
Robertson, Mel, Author
Media Type
Text
Item Type
Articles
Description
From the 1970s through the 1980s, Mel Robertson wrote many articles for the Burford Advance and Burford Times on the history of Burford Township. This clipping contains the article Back is a 4-Letter Word exploring the use of unsuitable vocabulary in Burford in the 1920s. The article may not have been republished.

Back is a 4-letter word

In the 1960s people under 30 felt that it would be politically profitable to shock people over 30 by using certain four-letter words in song, verse and story. To their dismay, they found that whereas people over 30 were disgusted, they were not particularly shocked. This was due to the fact that the words employed had been in common use for centuries. Their unsuitably for public use had been recognized in many Countries and ill Canada the Municipal Manual of. 1859 provided fines for their verbal use or for writing them on board fences. Consequently, the term Tour-letter word" became associated with words that were not used in polite society. However, there were a number of "four-letter words" that were used profusely in polite society 60 years ago and one of these was back."

To illustrate the use of this word let us walk along any of the older Burford streets and note the long, narrow lots. Some of these extend a couple of hundred yards behind the house white others stretch even to the next street. Most of these areas: are now well kept lawns. However, in the days before frozen vegetables were available all year long, our big lots held big gardens. These, like ancient Gaul, were divided into parts. Near the house was the "Kitchen garden which held such perishable items as lettuce, parsley, peas, etc.; things that the housewife could pop out and gather for the table. At the rear was "the back garden where large quantities of potatoes, squash and other storable things were grown for winter use. This was always called "the back garden and it was out of bounds to children unless they were asked to hoe it.

On farms, the counterpart of 'the back garden was "the back forty" which was composed of fields too far from the house for the men to be summoned by a whoop and a holler" and where some other means of communication had to be employed. Usually a child was sent, but some farms had bells whose belfries can still be seen on a few older farm houses. One exception was the Luard family which owned the MacKenzie farm east of Burford. They used an old

dawn. But let us return to Burford.

Leaving "the back garden and drawing closer to the 1920 Burford house another use of the word "back" would be encountered in the structure known as the backhouse" which, before Thomas Crapper (yes, that was his name) invented the valveless water waste preventer", or flush toilet, was found behind every house. People tended to be embarrassed by the word "backhouse and some called the building 'the little house", the out back or the house of parliament." However, call it what you like, there it was, covered with ivy, wild cucumber or Virginia Creeper and bearing the much used adjective "back."

Passing the backhouse" the next use of the word back was 'the back yard" which needs no explanation. It was an area inhabited by children, chicken coops, clothes lines and clothes Tine poles. If there was a front yard it was usually called the front lawn." I cannot find the reason for the different names for a grassed area but I suspect that in the class conscious Burford of the 1920s it was thought to be more classy" to call the front yard a "lawn. Another use of the word "back was that employed by my grandfather an Aberdonian, who always referred to his back yard as "the backside of the house" - a term which was acceptable in Scotland but thought to be obscene in Burford. From the "back yard we would enter the house by the "back stoop or "back porch' which was the term applied to anything from a few steps to a rather large covered shelter.

Whatever it was called, the structure protected the back door which in turn led into the back woodshed where

kindling, split wood and coal was kept. Since there were very few houses with two woodsheds the use of the term back is difficult to understand. Next to the "back woodshed" and sometimes part of it, was "the back kitchen where the laundry was done and where meals were prepared in hot weather. This was also called "the

summer kitchen. Many older houses in Burford still have back woodsheds' and "back kitchens but most have been converted to other uses. My "back woodshed" was converted many years ago into my office where this article is being typed.

Dodging the mass of stored material that was usually found in the back woodshed" and the back kitchen we approach the house back entrance.

When we enter the 1920 house we will skip the regular kitchen and go directly to the parlours, in 1920 many Burford houses had double parlours divided by folding doors. The "front parlour" was the formal room reserved for weddings, funerals and visits from the minister. It was not in everyday use. By contrast, the back parlour was an informal place where the family gathered in the evenings to read the Expositor' and listen to the phonograph. It was a room with comfortable chairs where you could lie back" and enjoy life. Today we would call it the family room.

Leaving the variours and going upstairs we find that there was always a back closet" which was not only a real clothes closet but also an imaginary place. In reality, it was, of course, the closet nearest the back of the house. In imagination, it was a term used to describe an unknown place. For example, if someone asked Where are Aunt Lucys drawers? the person who had thrown them out would say "I put them in the back closet knowing full well that by the time all the "back closets had been searched Aunt Lucys drawers would have ceased to have their original importance.

The term "back bedroom" was used in many large houses where there were enough bedrooms for all, plus a spare. This "back bedroom" was a special place. If it was over the kitchen a stove pipe would run through it and it would be used by invalids in winter. If it was on the north side of the house the husband and wife would enjoy its coolness in summer. If it was in one of the many Burford houses where a "hired girl" was employed, she might steep there. If not in use "the back bedroom became a temporary storage place for things that were awaiting removal to the attic.

In addition to its many applications to things about the house the word "back" was part of a considerable slang vocabulary. For example, one came to the

Another strange use of the word "back is the fact that Dufferin street in Burford has always been called the back street by older members of the community. There does not seem to be any particular reason for this since King Street has never been called front street" or Maple Ave. north-south street" or something. One can only assume that in the early days since King Street

was a well traveled planked thoroughfare, the people living there tended to equate it with the language they used to describe their "front doors", "front yards", etc. Dufferin Street has also had to bear up under the name of Shine Street after a name who lived there.

In preparing an article of this nature I am quite aware that some people may think that it is silly and trivial to make so much of a simple "four-letter word such as "back. However, before we are too quick to condemn it let us not forget that 1986 life is smeared with

buzz-words and expressions such as interfacing, countervailing, structured, up the flagpole, down the road", etc. There are used briefly by people who don't know what they mean and are then discarded for some other fatuous word or phrase such as interverbalize!

I am not interested in going back to the time when the word "back" played such a part in peoples lives but I do feel that by discussing the ways our forebears did, and said, things we are able to put a little life into our history and thus bear, with equanimity, the many silly and pompous things that beset us. 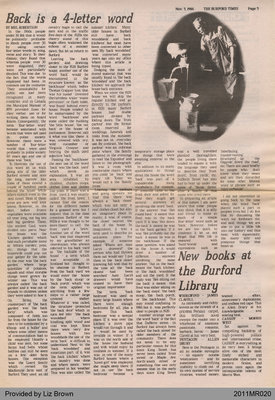