Creator
Robertson, Mel, Author
Media Type
Text
Item Type
Articles
Description
From the 1970s through the 1980s, Mel Robertson wrote many articles for the Burford Advance and Burford Times on the history of Burford Township. This clipping contains the article 285 Years of Burford Postal Service History. The article may not have been republished.

Postal service began in this area before there were people to use it. In 1701 when the French established a fort at Detroit, they also established a postal service to keep in touch with that fort. This operated monthly between Montreal and Detroit. In the summer the courier traveled most of the way by water but. in the winter he was forced to go by land. In the Burford area this meant travel along the ancient Indian Trail that is now No. 53 Highway. The monthly express (as it was called) consisted of a courier and two Indian guides. This group, which traveled on snowshoes, passed through the Burford are twice a month and if we had had any inhabitants at the time they, no doubt, could have arranged for their mail to be picked up.

When the British defeated the French at the Plains of Abraham they expanded the postal service to include all the outposts in the Niagara region and by 1800 the courier left London on the 23rd of each month . and reached York (Toronto) on the 6th of the following month. There he would rest for a day and return to London on the 8th. Arrangements were made for the couriers from the Niagara region to meet at a Burlington tavern for the exchange of mail. In 1800 a check was made of the East-West mail route and Burford was described as "Between the Mohawk village (Brantford) and Oxford (Woodstock) - 29 miles.

There were no Burford area post offices before 1812 but surviving letters of the Daytons and Benajah Mallory, who came here in 1795, show that they had no trouble sending and receiving mail. However, the postal service courier was very active in this area before 1800 and Gov. Simcoe recorded two meetings with Mrs. Clark the courier when he passed through Burford in February - March, 1793. These meetings were in the swamp west of Burford on Feb. 13th and March 5th.

During the War of 1812-14 many letters emanated from Burford.

Some are headed "Burford" while others have the location as "Yeighs" (now 67 King St. East residence of Mr. & Mrs. L. Cleverdon). There was no regular post office and from the military nature of the letters it is probable that they were carried by military courier.

In 1819 LtrCol. William Bowen became Burfords first post master. Bowen had entered the area in 1802 and acquired land on the 5th and 7th concessions. He had served with distinction during the war of 1812-14 and after the war had headed a committee of Burford men who drew up a list of the area assets. Bowen does not appear to have been an appointed post master but seems to have assumed the post as a public service at a salary of $5.00 a year. The post office was in Bowens farm house west of Burford and during the first three months of operation total postage amounted to eight shillings 10.5 pence (about $270). This may not seem to amount to much in 1986 but with the letter rate' of one penny it can be' seen that there was considerable mail sent.

Bowen died in 1821 and was succeeded as post master by his son in law William Van Allen who held the post until Col. George Whitehead was appointed post master in 1822. In 1825 the first postal contract was awarded to William McGuffin for the carrying of mail between Burford and Delaware.

Whiteheads post office was in his farm house on Lot 6 Concession 7 of Burford where mail was received and dispatched every day.

In January, 1839 George Whitehead turned over his duties as post master to his brother Willard who retained the position until January, 1858 when John Catton, another military officer, was appointed to the job. Catton was both a merchant and hotel keeper who maintained a large business east of Sprowls store in Burford. Salary was then $152.91 per annum and mail was handled at 230 and 7:00 p.m. daily. Mail was carried by the regular stage coach. In 1874 Catton relinquished the job of post master and W.H Woodin assumed the position until 1875 when Henry Cox was appointed. Cox moved the post office into the Sprowl store building for a time but when business became so heavy that it interfered with his store he moved the post office to a little building north of Sprowls which was, in reality, our first post office.

In 1914 Burford got its present post office which, at the time, was much larger than most post offices in villages of comparable size. It has always been said that in 1914 the government assumed that the population of Burford Township was that of Burford village and gave us a building commensurate with that size of place.

Rural delivery began in Burford Township in 1911 when Route No. 3 at New-Durham was opened under Mr. W.H. Mogg. The Canadian Postal Department in Ottawa, who gave me this information, cannot give any reason for this route being numbered 3. Other rural routes were Hatchley No. I Nov. 1912 -contractor W.L. Young, Burford No. 1 - contractor W. Young, No. H5 Burford May 1913 contractor A. Ferrell. Burford No. 2 July 1913 G. Pite, Burford No. 3 Nov. 1913 - S. Cavin,

Some idea of the postal service offered to Burford residents in the early days; can be gained from copies of letters I have between the Rev. George Petrie of Holy Trinity Anglican Church, Burford and Bishop Strachan of Toronto in 1841. Letters written in Burford or Toronto one day were delivered the next. Similar service existed between Burford and London.

One of the hazards of being a post master in Burford during the late 1820s was the fact that the only stage coach went through the village at 4-.00 a.m. While this was a very early hour the rumble of the coach wheels on the planked road could be heard long before the coach arrived and the post master had plenty of time to leap out of bed and handle the mail.

Later when Burford had four passenger trains a day a civilian contractor was employed to meet the trains and deliver the mail to the post office.

Burford Postal history has been marked by a

couple of un-postal incidents. In the winter of 1838, following the unsuccessful rising of patriots against the corrupt government, the Burford post master organized a gang of toughs who called themselves "Rebel Hunters", tied red arm bands on and went rampaging around Western Ontario beating up people they thought had been rebels". They invaded homes, smashed windows, urinated in flour barrels and did other nasty things. They finally reached Otterville where they raised a flag and declared that they had "liberated the town. To their surprise, the people of Otterville said that they did not know that they needed liberation. Faced with this replay, the cowardly mob sneaked back to Burford where I hope they felt thoroughly ashamed of themselves. Since over 400 Burford men had joined the Patriotic: revolt it can be imagined that the local rebel hunters' were not welcomed with enthusiasm.

The other un-postal event that took place in a Burford post office was in the early 1900s when Dr. Robert Harbottle shot and wounded Herat Stuart who he thought was the leader of a group who had been harassing the doctor for his pro-Boer feelings in the Boer War. This took place

"Documentary History of the War of 181244 and the Diary of Gov. Simcoes Journey from Newark to Detroit in 1793.

This is the first of a series of articles on Burford buildings sponsored by the Burford Township Historical Society. I will be doing the historical aspects and Clayton Barker will do the architectural parts. 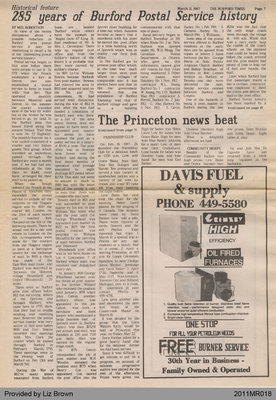