Creator
Robertson, Mel, Author
Media Type
Text
Item Type
Articles
Description
From the 1970s through the 1980s, Mel Robertson wrote many articles for the Burford Advance and Burford Times on the history of Burford Township. This clipping contains the article Bang Bang describing the history of the celebration of Victoria Day. The article may not have been republished.

During the past couple of weeks we have been celebrating the official birthday of Queen Victoria who died on Jan. 22nd. 1901 and who is remembered as the Good Old Queen and Britain's longest reigning monarch. It is not known if this day is still celebrated in other parts of the former British Empire, but in Canada it has always been associated with bangs" of varying intensity and exploding colours of marvelous hue.

Many countries have a "bang day In England, it is the day in November when Guy Fox tried to make parliament rise with gunpowder. In France, it is Bastille Day to commemorate the day the Paris mob attacked the Bastille prison. In the United States it is July 4th, or Independence Day In Germany, fireworks are set off on New Years Eve and in Northern Ireland and the Middle East it is any day when opposing factions feel that they can gain a bit of publicity. Indeed, it would be hard to find a country which does not have a day for a good "bang".

In the years, to chronicle a Burford childhood of the 1920s I seem to have missed the 24th of May which, before the advent of TV and radio, played a great part in the lives of children. This was due to the fact that there was not so much to attract a childs attention in the 1920s and thus our interest span was longer and instead of thinking about the next episode of 'Star Wars' or Sesame Street", we were able to concentrate on the few "landmark" days of the year such as Christmas, Easter, Halloween and the 24th of May.

What were the fireworks of the 1920s? The basic firework was a one cent package of about two dozen little fire crackers woven together with a fuse. They were about the size of a wooden match and about

half as long. They were of red paper and enclosed in a little red paper package with Chinese writing in gold on the outside. Since our knowledge of the various Chinese languages was rather limited we did not know for care) if these markings wished us a Happy New Year or if they condemned us as ignorant, Western, Big Noses". The little packages were intended to be fired all at once but the state of a 1920 child's pocketbook was such that the packages ,.were always taken apart and the crackers fired separately. Anyone who was so reckless as to fire off a whole package was regarded as a spendthrift who would come to no good.

Next in the rising scale of bangs was: the cannon cracker which only the idle rich were able to buy. These were about six incites in length and a couple of inches in diameter. They were supposed to produce a sound equivalent to the discharge of a cannon but in reality most were a district disappointment whose "bang could easily be exceeded by some of the vulgar sounds of hie.

squibs and the cannon crackers was a really nasty thing known as a dragon salute. These were about two inches long and came packed in a little box with a dragon on the outside. They produced a wicked explosion that could injure or blind an uncautious child The best way to fire a dragon salute was to get a length of pipe and a tin can. The lighted dragon salute would be dropped into the pipe and the can dropped on top of it. The resulting explosion would hurl the can about 50 feet into the air. Little did the childish practitioners of this: trick realize that in the 1940s some of them would be sending mortar bombs into the air with a similar device known as: a trench mortar and that the people at the receiving end would not be greeting the explosion with shouts of joy.

In the days before moon shots and space travel, our only incursions into the atmosphere were by means of sky rockets. These came in three sizes - five cents, 10 cents and 15 cents. There may have been more expensive rockets, but we never heard of them. Undoubtedly they were reserved for the inventors of hair tonics

and the bootleggers whose big, Mack Hudson touring cars sped through Burford in the small hours of the night. However, since none of us knew any of the famous Burford bootleggers we never expected to see any of these marvelous devices.

The performance of sky rockets in the 1920s depended pretty well on the price. The five cent rocket seldom got off the ground. The 10 cent rocket went about 20 feet into the air and exploded with two stars. The 15 cent outfit was an engineering marvel that took off with a tremendous "bang" and not only exploded 50 feet in the air with many stars but could also produce a flaming stick that could start a fire when it hit the earth. All rockets were fired (forty, ash piles for in the days of wood and coal fires everyone had ash piles in their back yard which were notable as rocket launches and for the fact that you could find snow under them when they were shovelled away to the dump in June.

Ground set pieces were limited to Roman Candles. Lawn Lights, Pin Wheels performance of each depended on how much you paid for them The Roman Candles shot out balls of fire and were too dangerous for children to hold The Lawn Light was just that - a light for the lawn and when set off behind a bush, as directed, brought every ones attention to all the winter trash that had been caught in the bush The Pin Wheel, or Catherine Wheel, had to be nailed to a fence post where, with a bit of encouragement, it would spin for a few seconds spewing out flame and balls and then expiring with a pop". Volcanos were rather obscene things that came in a cone and were supposed to sparkles, flame and bubble However, most were a distinct disappointment. They were very hard to ignite and in the absence d a brilliant explosion would produce a long, stinking, worm - like substance which was supposed to simulate lava from an erupting volcano but in reality seemed more like things we were warned not to step in.

The simplest firework was the torpedo which was a little paper bag about the size of a small onion. Inside the bag were a few little stones and a powder cap' When these were thrown on the ground the weight of the stones set off the cap with a small 'bang Torpedoes came packed with sawdust in boxes of several hundred. They were bought by adults on occasion and older people will recall a yellow Studebaker roadster that used to speed through Burford in the middle of the night while its driver threw handful of wake people. This was thought to be hilarious at midnight but since some of the big, black Hudson touring cars noted previously were known to carry Thompson Machine Guns" the sound of rapid fire explosions was not as funny as some people thought.

There were no community fireworks displays in the 1920s but Burford children knew that a few families had uncles and aunts who would buy extra fireworks for the children of the house and that these places could be visited to see the displays. People concerned were the Balsdons, the Carnrikes, Roy Miles, Scot Rutherford, the Bowermans at the Royal Bank, Billy Meredith, Lapierre Muir and my place. For some reason there was never any overlapping of these displays and children could go from one place to another without missing much. Most of these displays were informal but I recall one place on Maple Ave. South where we were all required to sit on the front steps while the boy of the house read off the instructions on each piece and told us what we could expect to see

In the early days Burford celebrated "the 24th" in a number of ways The day always began with a big "Bang" of some sort at about 530 a.m. as various groups of young men vied with each other to be the first to set off an explosion of gun powder in the streets. This was followed by an impromptu parade of early risers led by the Burford Brass Band. Then in the afternoon a Field Day" was held at the Fair Grounds where many novelty races were run. One of these was called a Hurry Scurry race in which contestants drove their horses and buggies half way round the track. There they would unhitch the horse from the buggy and ride it bare back to the finish tine where they hitched it up again. The winner received $2.00. Another contest was a tug of war between men and women with the men pulling with one hand only (the women usually won). Other events were foot races of all sorts including a night shirt

race in which men ran with night shirts over their clothes. At the finish the contestant who got out of his night shirt fastest was considered to be the best man. On a more messy plane, were the cased pig and the greased pole climbs. And through all this merriment the Burford band under leader composer. Andrew Messecar played The Jolly Walt?", The Passionate Dream, and As We March to the Burford Band.

For those who did not want to face a Field Day there was always an excursion to Grimsby Beach or Niagara Falls. At Grimsby Beach you could improve your mind by listening to speeches about imaginary trips to China or the decline of the Holy Roman Empire, while those who journeyed to Niagara Falls could cross to the States and sample the American "lager On the way home you could join the train newsboy in singing popular songs, you could spark your girl if the RR lights went out,

or you could sleep off the effects of the American Jager. It was always a day to remember.

Would Queen Victoria have been amused by the annual bangs and celebrations? The answer is yes for there is ample evidence that she enjoyed a good laugh and the wild Highland parties at Balmoral Castle. It is also known that she delighted in practical jokes such as short sheeted beds and Seltzer powders in chamber pots and with her husband the studious Albert would break into gates of laughter if a servant dropped a tray of dishes or if someone fell down stairs.

In the 1920s adults expected that any activity of children should be either uplifting or should point a moral to them. Today this is known as a structured activity. So what great truth was gained by the firing of those petty squibs: on the "20th"? The only one that I can think of is not to expect too much from a five cent sky rocket. 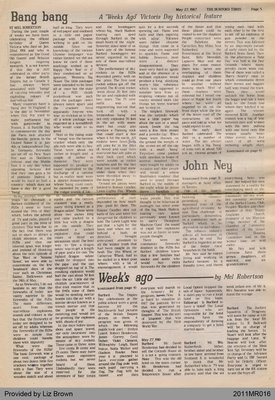