Home (Advanced) → What's New → Details
Coaster Wagons Were a Child's Entertainment Back in 1924 Era by Mel Robertson, from The Burford Times
Description
Comments (0)

Creator
Robertson, Mel, Author
Media Type
Text
Item Type
Articles
Description
From the 1970s through the 1980s, Mel Robertson wrote many articles for the Burford Advance and Burford Times on the history of Burford Township. This clipping contains the article Coaster Wagons Were a Child's Entertainment Back in 1924 Era. The article may not have been republished.

Coaster wagons were a child's entertainment back in 1924 era

Away back in those "unstructured" days before boys were given all-terrain, all-wheel-drive, motor vehicles almost as soon as they could walk, the standard gift for being "a good boy (whatever that meant) was a coaster wagon.

Although coaster wagons are still with us in greatly reduced numbers and under other names, it may be necessary to define what was meant by a coaster wagon in 1924. It had a wooden box, four wheels, two of which could be steered and a tongue by which it could be pulled. By name, coaster wagons were usually "auto wheel coasters", "disco flyers" or "fairy soap wagons". The names, of course, did not describe the wagons. The "auto wheel coaster" had steel-shod wheels and therefore was not like an automobile. The "Disco Flyer" had rubber-tired disc wheels and did not fly because the rubber tires stuck to the pavement. Moreover, although the name "disco" was used you could not dance in it. The "fairy soap wagon" did not promote cleanliness among fairy-tale people, as the name implied, but rather encouraged people to use the soap manufactured by the Fairy Soap Company.

Why the name "coaster"? The dictionary defines the word as meaning a small ship that trades along the coast. The verb "to coast" means to slide down a hill on a sled or to run down a hill on a bicycle with your feet off the pedals. None of these descriptions applied to the coaster wagon or the effort required to propel it.

Coaster wagons were propelled by the feet with a method described as "pumping". This was a widely us word that was also used to describe the propulsion of a swing or a bicycle. Actually the word "pumping" has nothing to do with any of these activities. The noun "pump" means a type of snow or a device to raise water, oil, or air pressure. The verb "to pump" means to pry information from someone, to shake hands, to inflate tires, to be out of breath, or (of all things) to urinate. None of these definitions applied to "pumping" a coaster wagon and kids flew along King Street in 1924 quite oblivious of the fact that what they were doing had nothing to do with pumps or pumping.

'Pumping" a coaster wagon was an art. Boys maintained that speed could only be obtained if the non-pumping foot was over the end of the wagon box and it was claimed that girls could never achieve speed in a coaster wagon because they kept their non-pumping foot inside the box and in the macho days of 1924 any boy who pumped his wagon with his foot in the box was regarded with suspicion. "Pump-in" a roaster was

not without some risk for the wheels were attached to the bare axle-end with a split pin and consequently when a boy was "pumping" hard his ankle was apt to strike the axle end and a nasty scrape would result. However, it was a point of honour never to cry "ouch" or to let on that anything had happened. After all our heroes in "The Youth's Companion", "Chums" or "The American Boy" magazines never flinched when their limbs were blown off, sawed off, chewed off, pulled off or shot off so why should their imitators let on that they had sustained an injury? Kids kept a stiff upper lip until they got home where they would prophesy that they would never walk again unless they received an immediate application of witch hazel.

Sometimes the coaster wagon was described as an "express wagon" as the word "express" was used in 1924 to describe speed and railway travel. In the days before jet aircraft, trips to the moon and Friday night traffic in Bur-ford, a kid's idea of speed and daring was to

fly an aeroplane or to drive an "express" locomotive. Since aeroplanes seldom visited Burford, kids had to be content with the role of "the brave engineer" who drove trains at 60 miles per hour and when involved in an accident was always found "with his hand on the throttle" presumably trying to get more speed out of his engine. Railroad engineers were the 1924 criterion for heroic daring and thus kids accepted the name "express wagon" as a vehicle capable of speeds almost equal to that attained by the four "express" passenger trains that passed through Burford every day.

So what was so big about the coaster wagon? By 1987 standards of childhood entertainment it would rate very low as a totally unsophisticated plaything. It does not have computers, computer chips, software, microfiche sheets or word processors. It did not convert to a person-eating monster or an interstellar rocket by the touch of a switch. It did not sing, make print-outs, or tell people to "have a good day". It did not have expensive batteries to go dead nor did it have preprinted electronic circuits. It did not present "a structured program of pre-teen modality or activity." It was not "a personally motivated, recreationalized device for inter-sexual relationship between post-infancy peer groupings." No, it was just a simple toy that parents gave to their children with the unspoken wish, "There it is. Make the most of it and keep out of the way."

Any comparison between the 1924 coaster wagon and the high-tech toys of 1987 is bound to create a laugh but we must remember that in 1924 there was no TV and little radio to entertain children when school was out. There were no organized snorts or recreational programs. Motor cars were not available, at a moment's notice, to take

children to places of entertainment. Few homes had labour-saving devices or even ice boxes,and while it was not unusual for Bur-ford families to have "hired girls", parents were required to undertake much hard, sweaty, labour in order to keep things going. Most children were left to organize their own entertainment with few accessories other than their own imagination. Imagination played a great part in the fives of the 1924 child and this imagination was based on stories children read in their Sunday School papers, the weekly "funny papers", or for the more fortunate child in such magazines as "The Youth's Companion", "Chums", "St. Nicholas" or "The American Boy".

The coaster wagon was an ideal vehicle with which to exercise the imagination. If there was a circus in Brantford with a parade, you could be sure that in a few days a "circus parade" of coaster wagons would appear in Bur-Ford with docile and bewildered dogs looking from cardboard boxes unaware that they were really tigers and lions. If two coaster wagons were hitched together they became the Burford "express" stopping at every crossing. If they were upside down they became Grey-Dort limousines being repaired at Billy Mclnally's garage. If the owners had cap guns, coaster wagons became black Hudson touring cars whose occupants were the Burford Bootleggers speeding to Detroit. IT there were cardboard boxes big enough to hold kids the wagons were settlers' covered wagons heading west. If the cardboard boxes had holes in the side and the occupants had cap-guns, the wagons were tanks going into action on the Western Front. Sometimes imagination turned to Biblical scenes from Sunday School and on one occasion coaster wagons were turned upside down by a mud puddle where kids, by turning the wheels and thrusting mud and grass between the spokes, imagined that they were Israelites in Egypt turning straw into bricks. When everyone's imagination failed to produce a new scene, the wagons would be hauled under a tree to serve as a spot for serious conversation and boasting - "My aunt plays the slide trombone, "My uncle knows an elephant", "My Dad can lick your Dad", etc., etc. On rare occasions imagination was replaced by reality and I can recall an occasion when three coaster wagons were fastened together so that a raft could be transported to the creek one mile north of Burford.

Ownership pf a coaster wagon had some disadvantages' one of which was the fact that certain little girls felt that they had the right to sit in wagons and nave little boys haul them all over town, day in and day out. The more precocious boys obliged them but the shy boys. either ran off or yelled "Haw Haw". It doesn't say much f9r interpersonal relationships to relate that the way this tedious task was terminated was to pull the wagon as fast as possible towards the girl's front lawn where by a sudden stop and turn the persistent passenger could be tossed out on the grass and left to bemoan her fate with howls of rage.

Most of the frivolity of coaster wagon days has long since departed from the local scene with one exception - In 1924 kids who had coaster wagons knew the location of every crack or hole in the sidewalks that might impede their progress. It is interesting to note that many of these cracks and holes still exist over 60 years later. However, in 1987 when most kids of "coaster wagon" age play among the 24-wheeler traffic on ten-speed bicycles I don't imagine anyone cares about such trivial things as holes in the sidewalk.

Looking back at the "coaster wagon" days of more than 60 years ago I neither praise nor condemn them. They were part of a different time and represented different attitudes and thus must stand on their own. However, having said that, an obvious comparison seems to be necessary In 1924 when children were left on their own they developed independent initiative by using what few resources were available to them. Now when high-tech devices rule the lives of children, it is sad to hear them say "I'm bored, There's nothing to do" whenever their batteries go dead or the hydro goes off.

July 21st, 1911 Burford - Dr. F.H. Johnston entertained about 65 of his "young friends" at his home last Friday. Note - Dr. Johnston was very kind to children and used to entertain large numbers at his home on Maple Ave. South on frequent occasions. As a child I attended several of these parties and was amazed how the doctor had time to organize games and romp with the children. After the death of his wife his sister kept house for him and organized the large amounts of food needed for the parties. Dr. Johnston seldom made a round of house visits in the country during the summer without filling his car with children. Many older area people will remember Dr. Johnston's kindness and his rather "rough and ready" approach to medicine.

Burford - The new canning factory has completed its canning of peas and has canned 150,000 cans. Tomatoes and corn will now be canned and there are plans to can pickles and meat in the winter so that

we can look forward to all-year work.

ML Vernon - The enterprising men of this village nave succeeded in getting a sidewalk laid on Main street. Mr. Stewart Amy drew the first load. Note - Parts of this sidewalk can still be seen. At one time Mt. Vernon had over 300 people. There was a grist mill a woolen mill, a barrel factory, a carriage works, a saw mill, a cider mill, several hotels, the Mt. Vernon Academy and several stores. 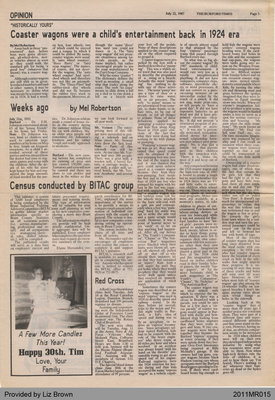