Creator
Robertson, Mel, Author
Media Type
Text
Item Type
Articles
Description
From the 1970s through the 1980s, Mel Robertson wrote many articles for the Burford Advance and Burford Times on the history of Burford Township. This clipping contains the article True or False discussing assumed facts from Burford's history. The article may not have been republished.

TRUE OR FALSE by Mel Robertson

During over 30 years of research into Burford Township history certain assertions keep coming up that are not supported by historical fact. It is difficult to understand how these suppositions have assumed the guise of facts but it is due, possibly, to errors in word-of-moutn transmission, faulty memory, or downright imagination. It may oe interesting to compare some of these supposed facts with what 1 have located through research in various archives, etc.

A. Thomas Homer (or Hornor) was the founder of Burford Township - This is not a fact. Thomas Homer was born in New Jersey on March 17th, 1767. His parents were well-to-do ana well-connected, Quakers. He received a igood education at the college of New Jersey (now Princeton University) which had been founded by one of his uncles. During the summer of 1794 Thomas Homer and his cousin Thomas Watson Jr. brought 20 settlers into Watson's Township (now Blenheim), an area that Gov. Simcoe had given to Thomas Watson Sr.. Homer established a mill near the northern border of Burford Township on what is called "Homer's creek" in 1795. When Gov. Simcoe rescinded Watson's grant for Blenheim Township, Homer received 600 acres, about half of what he had requested.

When the District of London was formed in 1800 Horner received a host of government and local offices both in Oxford and in Middlesex in return for his support of the government and the fact that he was one of the best educated men in the area. The granting of militia preference to rlqrner brought him into conflict with Benajah Mallory, one of the founders of Burford Township, who was also an ambitious man. In 1820 Horner became a Member of the Legislative Assembly by acclamation and held the seat until 1830. In parliament, Horner surprised everyone by being a reformer, despite the fact that he had received many preferences for his support of the Family Compact.

Horner was a man of many accomplishments. Not only was he a farmer but also he was an inventor who patented an improved horse-operated threshing machine. He died of cholera in 1834 leaving a wife and six children. (Source of information -"Canadian Dictionary of Biography", Vol. 6, entry by Daniel J. Brock)

B. Harley Town Hall was once an Anglican church - This is both true and false. While there is no record in Anglican Church Archives of a church being built in Harley there was an attempt to form an Anglican parish in the late 1800s and several church services were held in the Harley Hall. The Anglican church held property in Harley for some time but a church was never built. There are several old news reports of Anglican services in Harley Hall.

C. Burford United church was built from parts of the old Methodist church and the old Congregational church - This is completely false. The main part of the Burford United church was moved from the corner of William & Dufferin streets in 1902 by mygrandfather C.N. Woodin and I have a photo to prove it. The towers, basement and west wing were added later and the Assembly is of nwdern construction. In view of the excellent coverage given to the history of the church in Margaret Davis' book "Heritage of Faith" I cannot understand how this silly rumour survives.

E. Burford settlers had to carry their grain to Ancaster in the early days to get it ground - This is false. There was a grist mill one mile north of Burford in 1798 and by 1802 there were three mills in the Township. Any local settler who carried his grain to Ancaster bill was either a fool or a "dead-beat" who would not pay local millers.

The History of Brant County published in 1883 is frequently quoted as a reliable source of historical information about this area. This may be true as regards general information but when it comes to individuals it is highly suspect due to the way it was prepared and published. This history was sold on a commercial basis whereby the amount of information printed about a person depended on how much money the person, or the person's family, paid to the publisher. i This is not an uncommon practice. For example, a few years ago a so-called Social Register of Canada was prepared on the same basis and even today it is possible by the payment of

$40 or $50 to have one's name included in books purported to list the great me# or women, of the North, South, East or West or whatever title is being promoted. These publications may be considered to be a joke today but in the future, age may give them the aura of credibility. Since people subscribing to these books are permitted to write their own biographies (which are not verified) almost anything gets into print. The biographical information in the History of Brant County of 1883 should be treated with suspicion and verified elsewhere.

G. Burford Township was founded by United Empire Loyalists - This is incorrect. While it is difficult to determine the political motives that brought early settlers to our region it is apparent that most came here because our fertile, open plains made settlement easy and profitable rather than for any particular loyalty to the Crown. Many of our early settlers were American religious fanatics who came to escape religious persecution in the States. Others were Americans who cared little for either the American Revolution or the British Crown, but who merely wanted to be left alone to get on with their lives. For example, my mother's oeoole the Woodins came from New York State at the time of the Revolution but records do not show that they had suffered any persecution during the Revolution, or that they had any burning loyalty toward the Crown. It is interesting to note that our first member of the Legislative Assembly, Benajan Mallory, was an opponent of the Family Compact government which included many UEL. Also during the Patriotic Rising of 1837 over 400 Burford area men took up arms against the government and thus gained Burford the name of "A Nest of Rebels." Actually, our early settlers were people of widely differing beliefs and no group can claim the honour of settling the area.

I daresay that some of the above conclusions may be questioned but they are based on information contained in local archives, old newspapers, Ontario Provincial Archives, the Public Archives of Canada and verified family records. They may conflict with some "recpllections" or "memory" but it must be remembered that frequently "memory" stories change drasticafly as they are retold from one generation to another. In publishing this research I am not seeking to question the veracity of anyone but merely to show how some local beliefs differ from what is contained in archives and to point out that some recent historical statements that were attributed to me were not, in fact, made by me. 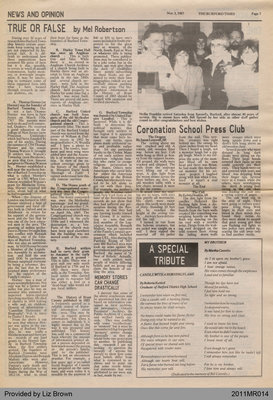